His channel Mana Truck Vlogs has more than 1.8 lakh subscribers 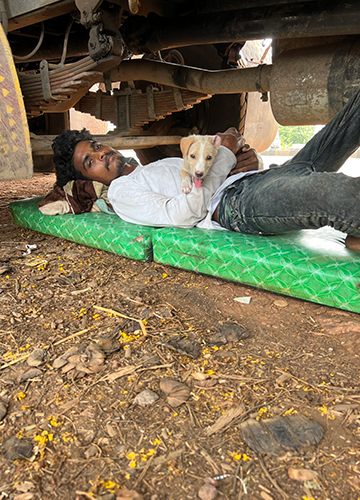 Scan social media, and you see people flocking to handles of actors, athletes and politicians. It is refreshing then to see a 24-year-old truck driver from Telangana deliver the goods. N. Mahesh, from Yadadri district near Hyderabad, started documenting his life on the road a year ago. His YouTube channel Mana Truck Vlogs now has more than 1.8 lakh subscribers. He has put out 125 videos till date, most of which focus on the ins and outs of his trade.

“I am flooded with messages every day,” he says. “My followers want me to teach them lorry driving or want to accompany me.” He did teach four of them how to drive. He had earlier taught his now backup driver Raju; the two are a team that spends days together on the road.

Mahesh's selling points are his humility and short takes on life. “My father was an alcoholic,” he says. “When I was a child, my mother had to borrow cash to buy groceries. Some days, we would starve.”

Mahesh dropped out of high school to support his family and joined a chicken centre as a helper. He later became a cab driver and worked for corporates. One day, though, life changed. “Rent in Hyderabad had become unaffordable as I was staying alone,” he says. “I decided to become a lorry driver and make the vehicle my home. I thought I could also earn a few thousand more.”

The idea to upload his life came when Mahesh saw that there were no vlogs about lorry drivers in the region. His trusty truck has taken him to the Western Ghats in Goa, the curvy roads of Meghalaya and several other places where he transports goods. On average, he drives 12 to 14 hours a day, and is on the road for at least 25 days a month. A small cylinder at the back of the truck is his kitchen. The driver’s cabin is his bedroom. Under his seat is a rod and some chilli powder; these are to thwart robbery attempts on highways.

In the past year, Mahesh has not only collected subscribers, but also unforgettable tales. In Odisha, for instance, he was stranded without food and water for 24 hours after angry villagers blocked the highway following a deadly accident. In West Bengal, a panicked Mahesh drove alone through the night after fellow drivers told him spooky stories about the forest he had to pass through. In Karnataka and Andhra Pradesh, he met two puppies—Blacky and Whitey—who are now his co-passengers. His subscribers love his bond with the animals. He had a scare in the northeast when one of the pups was abducted. He later found it tied some distance away. “It does not matter if I eat or not, but I make sure that I give them nutritional food three times a day,” he says.

Millions of views later, Mahesh has now built a small brand. He has already endorsed eight products. “I think my videos helped bring dignity to the profession,” he says. “From motorists to traffic police to employers, everyone treats us badly. People who see my videos comment that they realise our value. Though my efforts are small, I am happy that we are being recognised as humans.”

So now that he has made some money, will he continue driving? “I want to own a lorry and continue,” he says. “This lorry changed my life. How can I abandon it?”