Content, marketing, indulgent overseas audience have led to the rise of Tollywood

Mahender Singh is a typical Hyderabadi. He likes his mutton biryani, and speaks the Dakhni dialect—a mix of Urdu, Telugu and other regional languages. His apartment complex, bereft of a lift or a proper parking space, is nestled in the crowded middle-class locality of Vijay Nagar colony in southwest Hyderabad. The major attraction in his modest two-bedroom apartment is a tiny Pomeranian caged in a corner of the living room.

Mahender, 60, sits on the floor, resting against a sofa. He is fiddling with the TV remote, looking for a movie on YouTube, and when he finds it, his joy is evident. No, it is not Baahubali (2015) in which Prabhas plays a character named similar to his—Mahendra. The movie he has selected is the dubbed version of Adavi Ramudu in Hindi, which was released almost a decade before Baahubali. Within seconds of its playing, Mahender pauses the movie and points to the screen, saying, “Look.” The producer’s credit reads Mahendra Singh. “That’s me,” he says, with a hint of pride.

He produced The Strongman Badal (Adavi Ramudu) and 10 other dubbed Telugu films; some with an attractive star cast and reputed directors. He has dubbed another 200 Telugu films in partnership with others in the last 20 years. At a time when Telugu films had a negligible market outside south India, he would buy the dubbing rights to a film for a few lakhs and spend an equal amount on dubbing it in Hindi, getting the censor board clearance and on marketing the movie for either a theatrical release in Mumbai or satellite channel release.

The foundation laid by Singh and his ilk paved the way for the acceptance of Telugu films and introduced its actors outside the two states. But, the phenomenal growth and fame of the Telugu film industry has come at a cost—it has edged out some of its early champions. “I am no more in the industry,” says Singh. “In today’s time, I would need Rs2 crore to Rs30 crore for the dubbing rights of a commercial film. I just cannot afford it.”

The huge success of movies like Baahubali, Pushpa (2021) and RRR (2022) have raised the stakes. Prabhas, Ram Charan, Allu Arjun and NTR Jr have become pan-India stars. And, an estimated 11 male actors are said to have a significant market in north, central and west India. Some of the big actors in Tollywood get paid between Rs50 crore and Rs100 crore per movie. The production costs have gone up to capitalise on the trend and to dish out a fare that will appeal to a wider audience. Directors tasked to ensure a wider penetration of their films get a hefty pay and a generous cut of the profits. RRR will be released in 40 languages in the next one year. The sequel to Pushpa will be released in 10 languages. The Telugu industry is clearly undergoing a churn.

Natti Kumar has been witness to the humble beginnings of the Telugu dubbing market. A film producer, director, distributor, exhibitor and former office-bearer of the Telugu film chamber of commerce, he sold satellite rights of close to 300 Telugu movies between 2003 and 2012. “I sold movies for as low as Rs30,000,” he says. “Till 2010, there was no market for Telugu dubbed films. Even stars like Mahesh Babu did not have any takers outside Telugu states. We were happy to sell the movie in return for whatever amount we got.” He says he never anticipated the current demand for Telugu films. 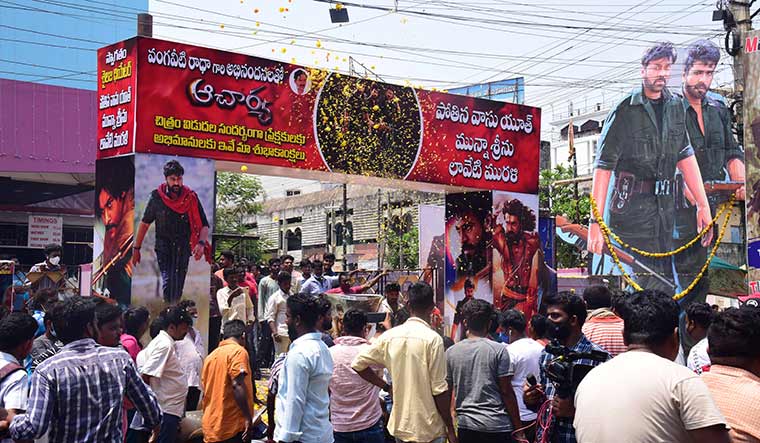 But some in Mumbai, like Jayantilal Gada, founder of PEN (Popular Entertainment Network), did. The first film PEN acquired was ‘Megastar’ Chiranjeevi’s Anji in 2004 that was dubbed in Hindi and titled Diler Daring. At that time, satellite channels needed content to run their 24-hour movie channels and Hindi film rights were expensive. Jayantilal picked south Indian films instead, as he says he knew from the beginning that only those films could cater to a wider audience. “Other language cinemas cannot do that,” he says. “We realised that in 2004 and 2005 itself. The reason being that the production values of other regional industries did not grow year on year as much as the south’s. Also, their viewership is not much. Only, the exposure of south cinema was less in the north, so the films had to be dubbed.” 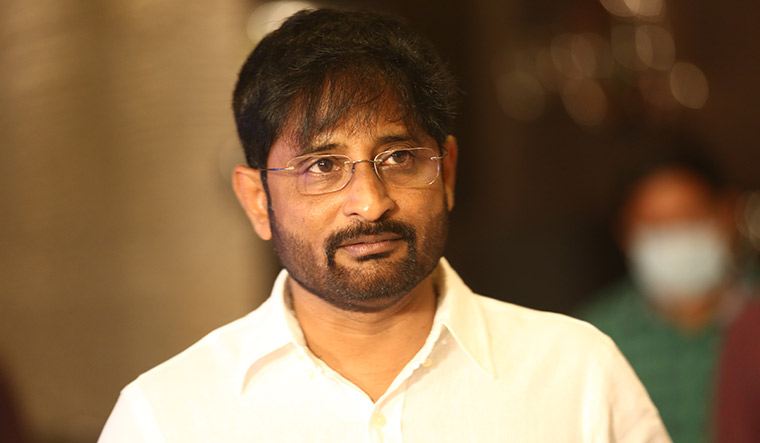 Another important player in the market is Manish Shah of Goldmines Telefilms, which acquired Pushpa. He, too, started out by procuring Telugu content for satellite channels. Today, Goldmines’s multiple YouTube channels have an exhaustive collection of dubbed south Indian movies. Buoyed by the demand, Goldmines has also launched its own satellite channel.

Over the years, movie entertainment channels like Sony Max and Zee Cinema played a major role in integrating south Indian movies into the mainstream. The familiarisation of the north Indian audience to south Indian artistes only helped showman S.S. Rajamouli to invade the untapped markets across the country with aggressive marketing strategies. During the pandemic, the consumption of dubbed content on satellite channels as well as on YouTube only increased manifold.

The number of YouTube views to some dubbed Telugu movies is astounding. Take, for instance, Sita Ram (2019), starring Bellamkonda Srinivas, which has close to 50 crore views. Its director, Teja, first worked as a cinematographer in Mumbai, assisting Ram Gopal Varma, before turning director of runaway hits of young love stories. Terming this as a “golden phase” for filmmakers, he says, “I am worried and hope that future filmmakers make pan-India and not pain-India movies. I hope they sustain it and not spoil it.”

Talking about why north Indian audiences find Telugu films appealing, he says, “Their (Bollywood) production houses are managed by highly educated people and those with MBA degrees and these are the people who want high class content. But an average audience in, say, Bihar will only want mass content. And, Telugu films are still able to make mass films.”

But not all Telugu films are guaranteed blockbusters. Post Baahubali, Prabhas has not seen much success—his Saaho (2019) and Radhe Shyam (2022) fell way short of expectations. However, it is a fact that among the highest grossing Hindi films, Baahubali: The Conclusion (more than Rs500 crore in the domestic market) and KGF 2 (more than Rs400 crore)—both dubbed movies—top the list, followed by Dangal (nearly Rs375 crore). According to a report by Ernst and Young and the Federation of Indian Chambers of Commerce and Industry, south Indian movies will do better than Bollywood movies in 2022. In the previous year, the domestic box-office revenues of south Indian movies was Rs2,400 crore while that of Bollywood was Rs800 crore.

Film trade analyst Komal Nahta says it is a wakeup call for Bollywood. “This is happening because somewhere they forgot to make movies rooted in Indianness, which were masala entertainers,” he says. “The simple reason is that producers, writers, actors formed their own theories that the multiplex audience doesn’t like mass cinema. They have been proven wrong—because if RRR, Pushpa and KGF (Chapter 1, 2018; Chapter 2, 2022) are not mass cinema, [then I wonder] what is. And, they have done fabulously well in the multiplex. So, the multiplex audience also wants mass cinema.”

While the Kannada and Tamil industries have seen their share of success, with KGF and Robot (2010) movies, respectively, the biggest advantage that the Telugu film industry has over its regional counterparts is a strong domestic market. Pushpa got 60 per cent of its total collection from the Telugu version. The film has been produced by Mythri Movie Makers. “We thought of releasing [Pushpa] in Hindi only after two schedules,” says Y. Ravi Shankar, a partner in Mythri. “Our aim was to reach Rs40 crore collected by KGF but we crossed that and reached Rs108 crore. We never thought it would do so well.” He, however, cautions: “We are at the right place and at the right time. It’s like earning a purple cap in the IPL. We have to perform continuously, otherwise we will be dropped mercilessly.”

Not to forget, the biggest money-spinner for Telugu films has been its overseas market. The US houses a large number of Telugu students and IT professionals. It also contributes to 80 per cent of the total overseas collections for any big Telugu movie. It is estimated that a new Telugu movie is watched by two lakh Telugu-speaking NRIs. If there is a positive buzz about the movie, then it pulls in almost five lakh people. A ticket for a premiere show is priced between $25 and $30 (more than Rs2,000). Naveen Yerneni—another partner in Mythri, who shuttles between the US and India—says Telugu people do not think twice before spending on movies. The Mythri team first witnessed the power of Telugu audience in the US with Dookudu (2011), starring Mahesh Babu, which raked in $1 million (then Rs4.4 crore) in the first three days.

The popularity of Telugu films has worked wonders for the thriving dubbing industry in Mumbai. Veteran dubbing artiste Vinod Kulkarni, who has voiced characters in The Jungle Book and Harry Potter series, found a new fan base when he started dubbing for popular Telugu comedian Brahmanandam. But it is no easy task to voice the legendary actor. “I have to keep in mind where to pause, say the punch dialogue and mind the diction,” says Kulkarni. “His actions are always different. I have to match them and not sound fake. I have a bass voice, but he has a high-pitch tone. In the process of matching his voice, I take care not to make my voice jarring lest it sound irritating. It is challenging and fun at the same time to dub for him.”

Back in Hyderabad, digital marketing firms are in demand to boost the reach of big films. Silly Monks did the digital marketing for KGF 1 and KGF 2. Prior to the release of the teaser, they came out with a dummy digital newspaper—KGF Times—which garnered interest for the movie, along with a Rocky fandom contest. The digital promotional budgets of multilingual movies today are crossing the traditional ones, which include hoardings and posters or satellite TV ads. “Digital is the future,” says B. Prasad, digital media PR at Silly Monks. “The film industry has adopted digital means as young and educated producers and directors understand its importance.”

While everything is going digital, there are ground realities that cannot be glossed over, like the caste question. Will the current churning change the caste dynamics in an industry that is caste-conscious and harbours regional bias? S.V. Srinivas, a cinema researcher and professor at Azim Premji University, Bengaluru, says, “Earlier, the industry was dominated by the Kamma community but it broadened to include Reddy, Kapu and now Velama communities,” he says. “The representation of OBCs, dalits and tribals is not there. It is an industry overwhelmingly controlled by powerful people. In the Tamil industry, we know that there are dalits and they are in powerful positions.”

The answer to the caste question lies somewhere in the future. Meanwhile, old Telugu films are much in demand today, especially those that have not been dubbed and have the potential to score big in theatres or on satellite channels or digital platforms.

Mahender Singh, who has leased many Telugu movies for 99 years, regrets his decision. “I would have been a crorepati today,” he says, “had I kept the rights to two or three Telugu films.”