Bollywood is run by immature ones: Vivek Agnihotri 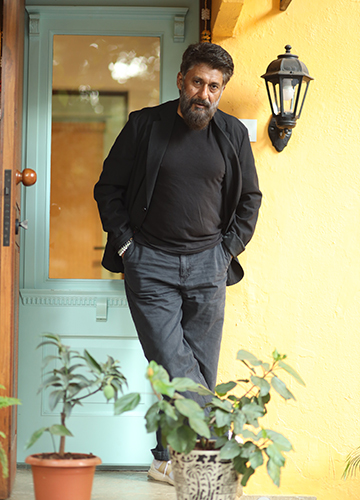 In Vivek Agnihotri’s The Kashmir Files, which trains its lens firmly on the barbarities meted out to Kashmiri Pandits in the valley, a 20-something student Krishna Pandit (played by Darshan Kumar) who studies at an elite Delhi university, stands confused as he sets out on the search for truth in the face of competing ideologies. On the one hand, there is his Kashmiri Hindu identity and on the other is the “leftist propaganda” that portrays Kashmiri Pandits as oppressors. In his protagonist’s transformation—from Arjun, the seeker of truth, to Krishna, the all-knowing—Agnihotri sees himself.

“I am Krishna Pandit,” says the filmmaker in an interview with THE WEEK, at a time when his film has already grossed Rs200 crore at the box office.

Although the director has no familial connection to Kashmir valley, the film is personal for him in many ways. Krishna’s mother is named Sharda, after Agnihotri’s mother. Also, the death of Anupam Kher’s character in the film reminded him of the time when his father died in 2008—while shooting the scene he broke down and wailed his heart out.

Ever since its release, the film has stirred the masses and set social media on fire. It has been called out for being a “lie” spreading “islamophobia” and for leaving out the “other side of the story”. But Agnihotri remains unfazed. “The problem is that the media is only highlighting the voices of those who are objecting to the film,” he says.

Dressed in all black and seated inside a suburban studio, Agnihotri comes across as feisty, yet, calm. He is wearing close to half a dozen bracelets on his wrist—something that has been his trademark for many years now. “Each ring symbolises a religion: Hinduism, Christianity, Buddhism, Sikhism, Judaism and more,” he says. And then after a brief pause, adds, “It has nothing to do with The Kashmir Files. Perhaps, I was born with these.”

Q/ Did you anticipate this kind of reaction while you were making this film?

A/ No, I never anticipated this kind of box-office success. But from the day I met Punit Goenka of Zee Studios [who produced the film], I had maintained that this film will be a hit. But nobody believed me. Only after the film collected Rs100 crore did people start believing me. Today, many senior people are saying that after the Quit India movement, this is the first time something has stirred the masses.

Q/ Who did you have in mind as the audience while you made the film?

A/ I knew that women will connect with this film very strongly—mothers, housewives, students. I had this instinct and from day one I have been saying that it will be watched by housewives. I mean those women who are not as literate, and those about whom Modern India does not care much. And, that is exactly what happened. Because I believed in my late mother’s native intelligence. I think my mother’s instincts were always right, although she was only a Class 4 pass-out. So, those people who are natively intelligent—not those with ideologies—are connecting with the film strongly.

Q/ Your film clearly states that in the 1990s, the state government used to bankroll the expenses of Kashmiri militants.

A/ Yes, of course. Terrorism is the by-product of modern vote-bank politics. We have said in the film that the terrorists in Kashmir were sheltered by Farooq Abdullah’s party in their headquarters. And it is not my imagination; it has come from the documentation. I tweeted the picture of Ramesh Kumar, whose tongue they [terrorists] cut when Abdullah was the chief minister. Sheikh Abdullah used to call everyone a kafir; he said if you find a snake and a Kashmiri Hindu kill the latter and save the snake.

Q/ There have been reports that the discontent between the Pandits and the Muslims at that time was the result of how the former had monopolised jobs in the valley.

A/ This is a big lie. Kashmir was a 100 per cent Hindu land. Before 1300, only Hindus lived in Kashmir. Ever since the Iranis and Iraqis invaded, they have been killing and converting Hindus under pressure. There have been seven exoduses of Kashmiri Hindus. How can they be the ones exploiting anybody? And how can a group which is reduced from a 100 per cent majority to a 2 per cent minority be the ones to exploit anybody?

A still from The Kashmir Files

Q/ You chose to keep your film black and white with no room for grey.

Q/ Do you think if Pandits go back to Kashmir, the two can co-exist peacefully?

A/ Yes. Because we have been co-existing in India forever now. When Muslims were persecuted, they came to Kashmir to seek refuge and Kashmiri Hindus sheltered them. For over a century, the two co-existed, but then they slowly killed all the Hindus. Kashmiri Muslims do not want to co-exist with Kashmiri Hindus. They said, convert to Islam or die. Hindus did not say it.

Q/ Will the profits from the film be used to help the Kashmiri Pandits?

A/ My wife [Pallavi Joshi] and I run the IAmBuddha Foundation which has been doing charitable work for Kashmiri children for the past several years. We also raised thousands of dollars for Kashmiri people during the pandemic. To add to that, we did a lot of research— 700 video testimonials [of first-generation survivors], which the government of India and the so-called great media of India never did; neither did any historian or university. All these “thekedars [custodians] of morality” never did a single thing for this cause. I have given four years of my life to this film. I have not done any other work in the last four years. What I am going to do in the future is for me to decide.

Q/ Do you think Bollywood has been fabricating fake narratives on Kashmir in the past?

Q/ Not many from the industry have come forward to support you.

A/ What is Bollywood I do not know. I have long resigned myself from there. I have left that lane and it has been 13 years now. I am an independent filmmaker.

Bollywood is run by immature ones. They have no gyaan on India and only know the herd mindset. I have made three films. All three assume that the audience has intelligence. All three dealt with complicated issues—exactly the subjects which Bollywood refrains from.

Q/ Do you feel there is a threat to your life?

A/ I have not taken any security. They have given it to me. I am sure they must have found reasons for it. Yes, there are threats, but I am not scared. I am tired, my body is hurting. I am not eating properly and there is no rest. What also bogs me down is that people still count the number of deaths, and that pains me. Are we concerned about the destruction of Kashmir or the numbers here?

Q/ What are the changes you experienced post the release of the film?

A/ No change in me personally, but there has been a change in people’s perception of me. I have been provided security on all sides, so I have lost my freedom of movement. I feel I have been trapped inside a prison right now.