Bonhomie between Vidya, Shefali as they promote their first film together is striking 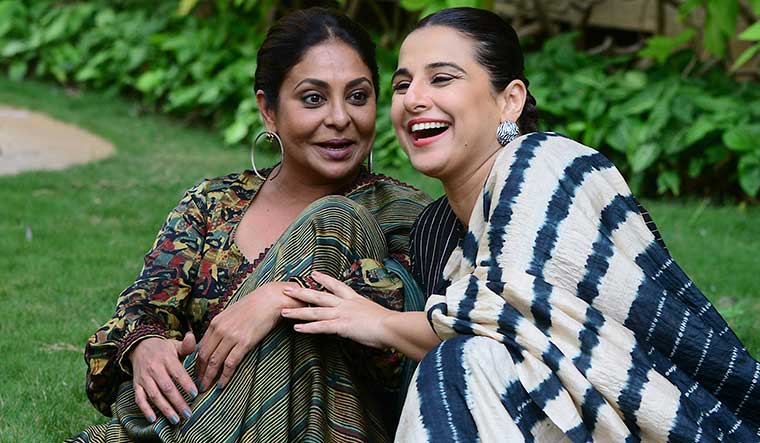 Around three decades ago, Vidya Balan and Shefali Shah kickstarted their journeys as television actors. It was the early 1990s when cassette players and recorders ruled the roost. Doordarshan, back then, had popular television serials that would bring families together at prime time.

Balan and Shah tasted their first years of glory through popular television shows that got them noticed and eventually gave them the entry ticket to Bollywood. While Balan began her career with Ekta Kapoor’s television show Hum Paanch (1996) as Radhika Mathur before joining Bollywood, Shah started her journey around the same time with Campus (1993), which revolved around college life of the 1990s and enjoyed quite a fan following. Over the years, both women—self-made professionals, married, and in their 40s—have successfully delivered powerful and moving roles across genres with stories that have touched upon gender, power, masculinity, ambition, and more. Yet, they never met, professionally; except for some chance meet-ups at events. And that is why in the latest Instagram reels doing the rounds the bonhomie between the two women—dressed in flowing saris and hair buns—as they go about promoting their first-ever film together, Jalsa, a drama-thriller, is especially striking. Incidentally, the two have very few scenes together, even though they play parallel leads in the Suresh Triveni directed film, which revolves around the death of a young girl and a news channel investigating it. Balan essays the role of an investigative journalist, Maya Menon, while Shah is a mother to a teenager who works in Menon’s house. But, what if the two roles could be swapped?

In an interview to THE WEEK, this question takes Shah by surprise. “This did not cross my mind at all until now. I think these roles were written with the actors in mind and I am very happy playing Ruksana, the mother,” said Shah. Then, after a brief pause, as if giving a second thought to the prospect of playing a journalist onscreen, Shah said her inherent curious temperament makes her ideal for such a role if it were ever to come to her. She recalled an anecdote from the sets of Jalsa when the entire crew wished her a happy birthday with a cake that had a big question mark on it. “That’s my personality. The urge to dig deep; to ask never-ending questions,” said Shah with a big laugh. Post-Jalsa, Shah is certain that a role similar to Balan’s is awaiting her, too. In Jalsa, both the women are shown to be powerful, principled, assured, and self-righteous, until a life-altering incident makes them see themselves differently and question their morality and beliefs.

Said Balan to THE WEEK, “The film is a journey of self-discovery and rediscovery. It forces you to realise that you are not who you thought you were and you will never know who you are until you are in a particular situation. The characters are all grey and that is what appeals to me the most.”

In a way, the character of Menon also feeds into Balan’s hunger for such driven and meaty women-centric roles in which she has established her forte. Be it The Dirty Picture, Kahaani, Tumhari Sulu, Mission Mangal, Shakuntala Devi or even her last release, Sherni. In that sense, Jalsa only offers a continuation to the kind of scripts that have been adding to Balan’s filmography in the past years.

“For me, what’s important is that I find a connection with the story. But I don’t think we should box it in the female-centric film category. I think when you see the story, you will realise that these two characters could have been men but I’m glad Suresh chose to tell it through the lens of two women. I anyway find female-led films far more interesting because I think there’s a lot more variety there. They are a lot more nuanced; they are a lot more fun. They are not one type of film. Unfortunately, the male-driven films are more or less the same.”

While Balan found her space exactly as she wanted it, for Shah, the role of a mother-on-screen was not anything new given that she has been portrayed as a mother in many of her previous films—right from being a doting mother to leading stars including Akshay Kumar, to younger actors in Juice, Once Again, Delhi Crime, Human.... “I have zero qualms about who I am or what age I am. I am comfortable playing the role of a mother, but not to a 30 or 40-year-old as I had done earlier in my career. That does not sit well with me now. Also, the difference between the roles of a mother in the years before and now is that there is much more character to her now. It is not just the relationship that is emphasised, but the character of the mother herself is fleshed out well. Her own identity is given weightage and her individuality matters now,” said Shah, adding that motherhood also came to her as an instinct, given that she is already a parent to two grown-ups.

Today, Balan and Shah are at the prime of their careers. While Shah had six releases last year, she is already looking at completing another four projects this year, including Darlings, Three Of Us and Delhi Crime 2. As for Balan, who is known for completing one project a year—Shakuntala Devi (2020), Sherni (2021), and Jalsa this year—she is “enjoying working this much” and does not think that’s going to change.

Shah feels lucky that the OTT boom has helped actors such as her get noticed. “(There was a time when) I would only be doing one project in two years and waiting it out most of the time for meaty roles to come my way,” she said. In that sense, she also draws a parallel to the way her career has evolved and society has changed. “Earlier who would have thought that a 40-plus woman would become the hero of a show or a film. Now in my 40s, I’m doing this well. It is mind-boggling,” she said.