Elections are a national sport, pulling in even the unattached to exercise her opinion. In the last seven and a half years, India has undergone a huge change propelled by the unprecedented mandate to the BJP. A question that invariably pops up in serious political discussions and even casual family chat groups is how long will the BJP’s influence prevail.

In the conclusion of his new book, Modi’s India: Hindu Nationalism and the Rise of Ethnic Democracy, political scientist Christophe Jaffrelot, too, raises this provocative question: Can electoral defeat puncture BJP’s resolute march towards crafting a new hegemony? Unlikely, he writes. The sangh parivar, he explains, is so deeply entrenched in the country’s social fabric that it may continue to dictate terms on the ground. Also, the deep state may remain in a position to influence policies and politics even if the BJP is voted out. In that sense, Hindu nationalism does not rely as much on one man to push its agenda as the BJP does to win elections.

Jaffrelot has looked at 20 years of Narendra Modi in power, starting with him being sworn in as Gujarat chief minister to his seven years as India’s prime minister. He has extensively documented all the major changes and events that pushed the country towards becoming, what he calls, an ethnic democracy. He gives the technical definition of a populist leader and ethnic democracy to put Modi and India into that bracket, which one may or may not agree with.

In India, a populist leader is seen as one who doles out welfare schemes or freebies ahead of elections. But theoreticians argue that a populist leader is one who likes personalisation of power and engages directly with people, and at times manages to create an identity independent of the institution or party one belongs to.

“Modi brought something new to hindutva as he fulfilled most of the criteria of populism as defined by theoreticians,” writes Jaffrelot. He cast himself as an embodiment of the people in their entirety. Modi tried to epitomise this unifying figure by adopting the features of a fakir who sacrifices everything for others, and that resonated culturally across India, the book argues. Modi’s positioning as an emperor of Hindu hearts (Hindu Hriday Samrat) has been complete.

Modi’s magic lies in the fact that he is more than a populist leader. As he travelled abroad and hugged world leaders, he is said to have restored people’s pride and sense of dignity. And, that is why Modi is not punished by voters even when he fails on the economic front. Citizens are more prepared to pay allegiance to a strong leader who is endowed with exceptional qualities and who protects them and restores their self-confidence, states the book.

Modi’s populist style, writes Jaffrelot, helped the BJP cross a new threshold—30 per cent vote share—which the party had previously been unable to attain on account of its elitist profile. Jaffrelot also brings in caste to link the rise of Modi and BJP. “Modi’s rise is also attributed to the phase in the sangh and BJP history when [they] could shed [their] elitist identity of being organisations of upper castes,” he writes. “While Vajpayee’s BJP attracted upper caste voters who saw it as a protector against positive discrimination, Modi’s BJP attracted voters of both profiles: upper castes and those who benefited from positive discrimination (reservation), especially the OBCs.”

Modi portrayed himself as someone from the social and geographical periphery, as a clean outsider pitted against the corrupt Lutyens leaders.

India becoming an ethnic democracy, says Jaffrelot, is a product of ethnic nationalism—the ideology of a group that considers itself bound by racial, linguistic, religious or other cultural characteristics. This sense of identity goes along with the rejection of the other.

“Many countries have gone down that path but the archetype remains Israel. Where judaisation of identity symbols inform everyday life,” Jaffrelot quotes Israeli sociologist Sammy Smooha, who introduced the concept of ethnic democracy.

In Israel, majoritarianism is enshrined in law, as constitutional amendments establish the supremacy of Jews. In India, says Jaffrelot, it has happened with attacks on secularists, the left and all those opposed to the saffron right and by instilling a fear of radical Islam and Pakistan. 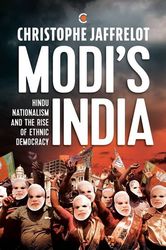 Modi’s India: Hindu Nationalism and the Rise of Ethnic Democracy