Marvel Studios and the multiverse gamble

The infinite possibilities have made the grand narrative compelling, yet brittle 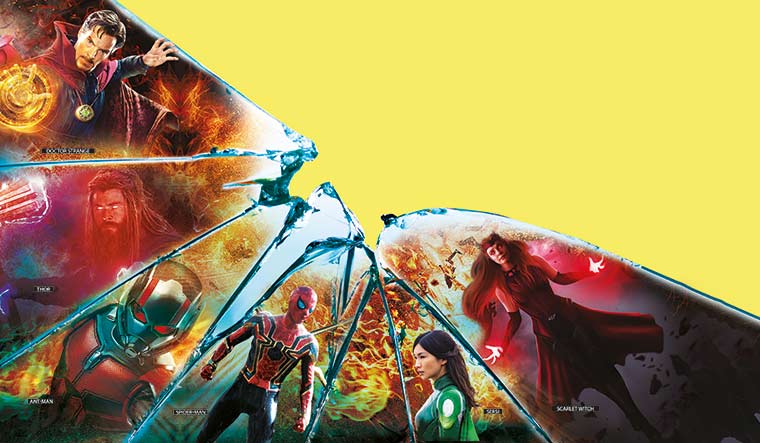 Martin Scorsese does not like Marvel films. He made it clear that it is “just not cinema”. “It isn’t the cinema of human beings trying to convey emotional, psychological experiences to another human being,” said the legendary film director, equating Marvel films to “theme parks”.

When quizzed about Scorsese’s comment, Robert Downey Jr, who famously played Tony Stark/Iron Man, said that he respected Scorsese’s opinion, but begged to differ. Yet, he went on to add: “There’s a lot to be said about how these genre movies denigrated the art form of cinema. When you come in like a stomping beast and you eliminate the competition… it’s phenomenal.”

The actor is both right and wrong. He is right about the behemoth that the Marvel Cinematic Universe (MCU) has become. There is not a single film franchise that can hold a candle to Marvel’s success on the critical-commercial graph.

“I’m not surprised [by the success], because many of the comics were great, and superhero films have been getting steadily better since the 2000s,” said science-fiction novelist Samit Basu. “This long-running, multi-directional collaboration is as impressive as anything on the creative front.”

Basu, who has been on the shortlist for the prestigious JCB Prize, lauded Marvel Studios for entrusting its films to directors and teams with distinct voices. The depth of field and multiplicity of vision in the franchise are inherited from the comics. And that is where Downey Jr is wrong, in seeing them as ‘genre movies’—films that can be pigeonholed into one of the ‘lower’ genres such as action, sci-fi or horror.

Over the course of the 26 interconnected films and several spinoff series, we have witnessed a variety of genres and themes on play—be it the comedy of Guardians of the Galaxy and Thor: Ragnarok, or the fantasy of the recent Eternals, the commentary on race in Black Panther or even the strong emotional drama in Captain America: Civil War.

Yet, intriguingly, it is the franchise’s slow march towards another genre that is redefining it. Incorporating a myriad of complex elements and arguments, the MCU is toying with the laws of physics, transitioning to brain-racking science fiction.

This is unprecedented. Because when German physicist Max Planck propounded the theory of quantum mechanics, he certainly would not have imagined his theory or his name making it to a superhero film. “Quantum fluctuation messes with the Planck scale, which then triggers the Deutsch Proposition. Can we agree on that?” says Tony Stark on the plausibility of time travel.

It is a different matter that quantum computing pioneer David Deutsch denies the existence of a “Deutsch Proposition”. But Stark needed to invoke the Planck scale—aka the universal limit, beyond which the currently known laws of physics break—in an intense discussion on whether the quantum realm could be the key to bringing back those who perished when Thanos ‘snapped’. 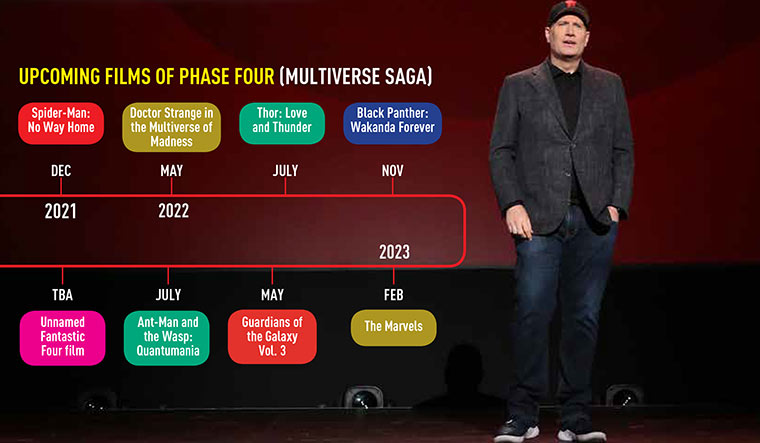 Ever since the concepts of the quantum realm, time manipulation and the many-worlds theory were introduced in Ant-Man, Doctor Strange and Endgame respectively, the MCU has been on a trajectory that has made the films and shows that followed unexpectedly complex. The franchise reached a crescendo with that last Avengers movie, and then burst into multiple universes—aka the multiverse.

The Loki series happens along the main timeline, but it culminates in the sudden splintering of the MCU’s ‘Sacred Timeline’; Spider-Man: No Way Home drags in nemeses from previous iterations of the slinging hero, and next year’s Doctor Strange in the Multiverse of Madness will be… well, it is self-explanatory.

“The multiverse steps they are taking now will definitely lead to yet another upscale in the scope of their ambition,” said Basu. “Time travel and multiverses are not particularly hardcore sci-fi—there are large mainstream audiences that understand both.” That said, he added that the MCU making sci-fi understandable to unfamiliar audiences does not mean the makers are watering down the science. “It is just good storytelling,” he said. “The arrival of smarter algorithms and sharper storytelling have made broader audiences more open to trying new things.”

The gripping overarching narrative, the minute details and the odd Easter egg have drawn viewers into conversations of not only what transpires in these films, but what could have been. And Marvel is milking this level of engagement for what it is worth. Case in point, this year’s totally unnecessary yet well-received What If…? animated anthology series, which reimagines key moments so far in the MCU in a multiverse of countless possibilities.

Of fan theories, there has been no end. Consider the months leading up to the release of Endgame, where theories of what we should expect were as many as Doctor Strange’s 14 million possibilities in which the Infinity War could be played out.

And over the past two months, the only question on everyone’s mind is if Tobey Maguire and Andrew Garfield will arrive from other universes to fight alongside Tom Holland in No Way Home.

We have been warned that the average 21st-century mind has the attention span of a goldfish and indulges in largely mindless content, i.e. doomscrolling through social media. But perhaps the popularity of the MCU proves that many of us still relish complex arguments and conversations.

In fact, after the release of Endgame, the director duo Russo brothers were bombed with doubts that ranged from the scientific principles deployed in the film to potential plot holes. The pair released a document answering many of the biggest questions in detail. They were, and are, aware of the discourse their films are generating. 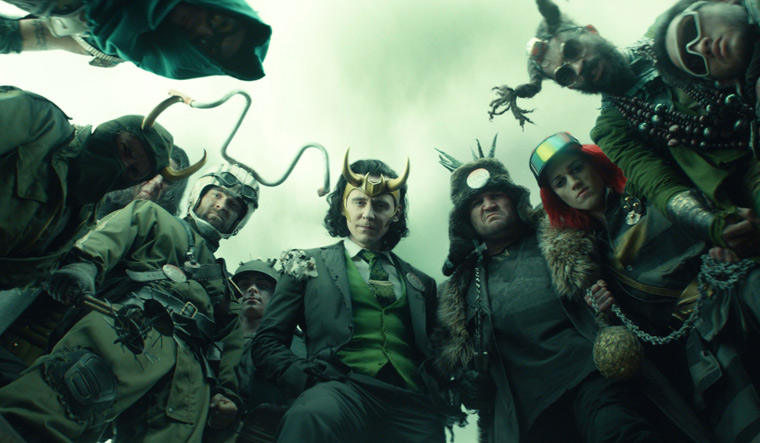 How many is too many?: A team of Loki variants from the Disney+ series, which introduced many new timeline possibilities to the MCU.

But the pitfalls of such an approach lurk as the MCU ventures into the dense forest of science fiction. As each piece of work in the franchise weaves its way around each other, filling the blanks and creating new mysteries and questions, the complex could slip into the complicated without due care. Then, you not only lose those casual fans who are unfamiliar with the MCU’s catalogue, but also loyalists who turn disillusioned.

There are already early warnings of this because, according to BGR.com, even people at Marvel Studios are starting to get confused by the goings-on in the grand narrative. Marvel reportedly has to hold meetings to figure out its own multiverse rules. Kevin Feige, president of Marvel Studios and primary producer of all MCU films, plants members of his core team in each project and they frequently converge to ensure each project is on track in the grand scheme of things.

Rules that dictate the workings of something like the multiverse are not set in stone. Canon is fluid. This takes us to the next pitfall: retconning.

When Sherlock Holmes was supposedly killed off at Reichenbach Falls while locked in a battle with James Moriarty, there was pandemonium among the fans. “Bring him back!” they demanded of Sir Arthur Conan Doyle. The writer obliged and resurrected his famous detective, revealing in The Adventure of the Empty House that Holmes’s death was staged. This is one of the earliest examples of retroactive continuity.

‘Retcon’ is a science-fiction tool to rewrite events in the past or to twist them in a way to make a point belatedly. E. Frank Tupper wrote that “retroactive continuity ultimately means that history flows fundamentally from the future into the past”. But when misused, retconning can be disastrous. A bad retcon is a loyal reader/viewer’s nightmare.

Marvel Studios’ decisions and plans are no doubt commercially driven. Should it reach a point where the tap of fresh ideas runs dry, and the studio resorts to desperate retconning to revive interest, this could almost certainly lead to the entire franchise’s descent into entropy. When X-Men Days of Future Past wiped out the events of all prior movies, fans went ballistic and demanded that DOFP be omitted from canon.

“I never mind a retcon if it’s done right,” said Basu. “The MCU could have its own X-Men moment at some point, probably after the multiverse makes anything possible. Canon should always be fluid, as long as the steps forward are actual improvements.”

In fact, Feige has already retconned his grand plan several times. Despite having a five-year rolling plan for the franchise, the producer is not averse to veering away from the blueprint if a better idea pops up. The recent Black Widow is an example of a good retcon, giving the character a well-deserved send-off. It is Feige’s oversight over the last 15 years that has ensured consistency in the franchise.

This level of flexibility and planning is where the MCU has scored over the DC comics’ extended universe. The lack of cohesiveness and the rush to assemble a band of superheroes has hurt the DC movies, despite owning two of the biggest superheroes of all time—Batman and Superman.

“I think one of the issues is that Marvel had consistent leadership for the last 15 years or more, whereas DC hasn’t,” screenwriter David S. Goyer told The Hollywood Reporter in July. “There have been all of these changes in terms of who is running DC. That is fundamentally very hard. It’s hard to make any headway when leadership is changing.”

Goyer wrote Man of Steel and Batman v Superman: Dawn of Justice, and even co-wrote Christopher Nolan’s Dark Knight trilogy. He said that Man of Steel was born out of a writer’s block that he and Nolan hit during the making of The Dark Knight Rises.

And while fans hoped that Nolan would merge his Batman series with Superman’s new origin story, the director was firm that he would not allow it. He “godfathered” Man of Steel before stepping away, leaving fans wondering if the DCEU would have been a worthy competitor to the MCU if Nolan stayed on. “What If…?” they ask to this day.

In the meantime, the MCU juggernaut rolls on. The mix of market-driven content and fresh editorial insight is curated by geeks who are not restricting themselves to any one genre. “What’s evolved down the years is a slow cultural transformation and familiarisation, and people who grew up being very fond of the comics becoming old enough and powerful enough to make studio-level decisions,” said Basu.

The pandemic disrupted the scheduling of the movies, and so the interconnectedness meant that post-production went on for ages as the chronology had to be followed. The situation is such that while Ant-Man and the Wasp: Quantumania completed filming in November, there are six other films that have to be released before it sees the light of day in 2023.

This could have a cascading effect. Nevertheless, while the studio sorts it out, audiences will be drawn into the multiverse with its nuances and mysteries. Whether it is complex or simple, it surely qualifies as “cinema”, regardless of what outsiders feel.