Bharti Kher weaves a bolder exploration of the body that is human, magical and animal 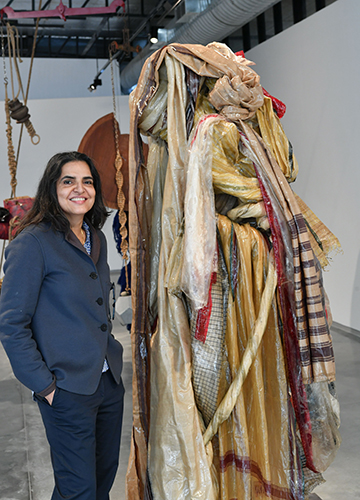 Smooth navigator: Kher next to her work ‘Cloak for MM’ made in sari, resin and metal, where she pays homage to a dear friend who died six years ago | Arvind Jain

In a 2016 work, British-Indian artist Bharti Kher cast her mother in plaster. Two years later, in a widely acclaimed group show titled Sculpture, Colour and the Body (1,300-Now) at The Metropolitan Museum in New York, the mother sculpture sat atop a wooden stool in her naked form. Her eyes were closed in a quiet, meditative pose with the plaster poignantly capturing every sag and swell of her ageing body.

In her latest show, Strange Attractors, which opened at the Nature Morte gallery in Delhi on December 5, Kher breaks apart the sculpture of the mother in a work called Pieta. It obliquely references the Renaissance sculpture Pietà, which Michelangelo carved from a single block of marble. Housed in St. Peter's Basilica, it shows the Virgin Mary supporting the figure of the dead Christ—a young mother and the male child as seen in medieval Christian art. Michelangelo was often criticised for making the mother look younger than she would have been when her son died.

In Strange Attractors, Kher depicts her mother's cracked plaster frame as lying down on a rectangular block of wax, which almost resembles a glazed slice of layered cake. It is almost delectable. In this plaster and wax sculpture (69x30x30 inches), femininity and motherhood are not cast in the language of heroism and grandeur. Plaster and wax have their own purpose as medium and material. Kher often breaks objects in her studio, never to convey a sense of brokenness but to probe and reveal what is hard to see on the surface.

“[Through Pieta] I am saying this is my mother and she is the old female ageing body. I wanted to engage with the idea of an old woman politically as well. She is not the revered goddess. I am not making her bigger than she is physically, but emotionally and psychologically this work is gigantic because our mother is the most significant person in our lives," says Kher to THE WEEK, just a day before the preview of her show that refers to a mathematical concept elaborated in Chaos Theory that all matter is unique

There's always that method in madness, a sense of orderly disorder, in the disruptive installations of Bharti Kher---one of India's foremost contemporary artists. Her life-size sculpture of a dying elephant, entitled The Skin Speaks a Language Not its Own, created in 2006, remains one of her most iconic works and endures as a benchmark of maturity for contemporary art in India. The poignantly slumped fibreglass elephant, whose hide was created from thousands of white bindis, fetched a record $1.5 million (Rs 6.9 crore) at a Sotheby's auction in 2010, making Kher the top-selling contemporary artists of her time.

With her recognisable triumvirate of "bindis, bodies and saris," Kher has charted a dramatic oeuvre of collage and juxtaposition that never fails to mystify and bewilder, captivate and repel. Her strange, surreal "hybrid beings" will defy descriptors. Like in The Intermediaries, 4.8m high, at Regent’s Park in London in 2018, three half-broken figures, almost resembling deities, fused into a family of a father, mother and child. Or the giant heart of a blue sperm whale whose anatomical mysteries were manifested in a whorl of bindis in An Absence of Assignable Cause (2007). In the 2004 Hungry Dogs Eat Dirty Pudding, an everyday domestic object like a vacuum cleaner is defamiliarised as it lies covered in animal hide and is attached to the face of a dog.

"Surrealism, futurism, abstract expressionism, impressionism, do these isms matter? I pick and choose from wherever I want to and create my own language," says Kher, dressed in a slick shirt paired with jacket and trousers, looking rather officious, smoothly navigating last minute corrections and clarifications before the show.

In Strange Attractors, there is a centrepiece called A Natural Unity of Opposites, where a resin-shiny sari is neatly folded on the trunk of a buffalo hanging from a rope and is offset against circular wood beams, often chipped at the edges. A separate enclosure reveals the Animus Mundi, where a lissom white figure of a goddess is gracefully spilling out the folds of a sari from her mouth but her head is that of an animal. "Animus Mundi is the centre of the universe where all things converge. A connection between all living things, the vital force in a world that carries all human and animal energies," says Kher about the work. 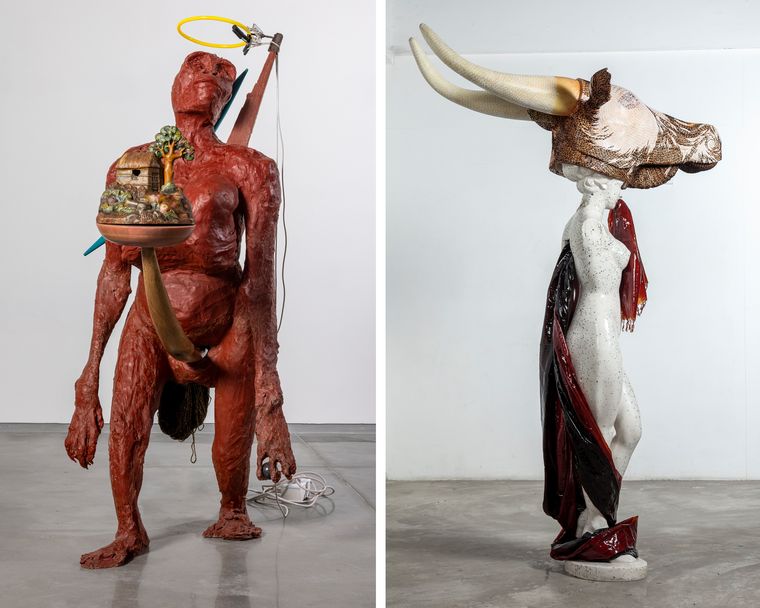 Bold and beautiful: (Left) the title piece Strange Attractors (fearsome form of a monkey) and Animus Mundi (a goddess spilling out the folds of a sari from her mouth).

In Benazir, the artist recalls the powerful political figure who foretold her own assassination, who was equally loved and hated. Benazir Bhutto was shot five times and the sari folds accordingly go in and out of an absent body, almost in a large mangled heap. In Cloak for MM, made in sari, resin and metal, Kher pays homage to her dear friend and famed sculptor Mrinalini Mukherjee, who died six years ago. She left behind an incredible collection of saris, which Kher bought from her estate and transformed into art. "She was a great collector and wearer of the most fantastic textiles. This is for her. The idea of this work is that the body becomes somehow a cloak, she could be invisible, magical, somehow she can have the power of something else," says Kher, almost feeling her friend's fantastical presence.

"I want to seduce and detract. I want to push you and pull you away at the same time. I want you to come into the work and then go away, look around. And feel something guttural," says Kher on the fascinating duality of her works, which can only be experienced in person.

There is the idea of flux that Kher continually mentions in the course of her conversation. How everything is in motion, objects in space, the negative space around objects, counterbalances, weights and the ever-increasing correlation between the arts and the sciences. She geeks out on the ideas of the universe, telescopes, developments in quantum theories, gamma rays, the possibility that the universe is constantly expanding and contracting.

In what would now be considered prescient and prophetic, Kher had started a 30-year project in 2010 called The Virus Series, which will end in 2039. Every year, she creates a swirling mass of bindi artwork that is accompanied by text where the artist gives her predictions. She makes them once a year and it is usually shown in a museum.

For example, part of the text for Virus XII 2021, says, "Male birth control pills will be made available, making this the most significant contraceptive for men since the condom. New hybrid fully autonomous flying cars will be seen in the skies, avoiding traffic congestion on the roads….”

Virus 2022 will be shown in London. "For me, Virus is just an amalgamation of all the different interests that I have. Being alive, living, sexuality, contemporary politics, so many different things. And every year its marked by how old I am. The project started when I was 40 and will end when I am 70," says Kher, now 52.

In her sisterhood of Strange Attractors, disparate ideas and signs from multiple sources play off each other. And her women too are continually shape-shifting. "Flux, that's the mire of the universe. What are you looking at? Are you sure you know,” Kher asks before pointing to the title piece Strange Attractors, which is surreal slightly fearsome form of a monkey with a flowing mane at the back (its tail jutting forward balancing a tiny house sculpture), “Have you ever seen anything like that before? Neither have I.”