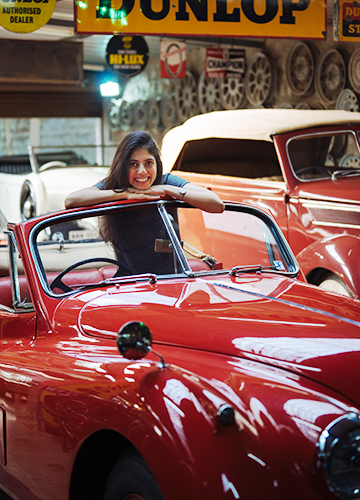 Red hot passion: Rupali Prakash with a car in her collection.

Madan Mohan Yadav has always been conscious of history and heritage. “I was born and raised in Khetri, which is famous for two things: copper and Swami Vivekananda,” says the managing director of Deneb & Pollux, a tours and travels company. But the Gurugram-based vintage car maverick might be the third best thing about the former princely state.

During his visits to the local palace, a young Yadav, who hails from a farming family, would gape at the snappy chariots of the maharajas. There was one that he particularly liked—the 1928 Dodge Victory Six. When the 11th Raja of Khetri, Bahadur Sardar Singh, died in 1987 without an heir, seven royal cars were moved to a mechanic’s garage.

In 2000, when Yadav, as a first-generation entrepreneur with limited money, was office-hunting for his startup, he got a call from the mechanic; the Dodge Victory Six was on the market. Office be damned, Yadav bought the car instead. He was 28 then. In the next one and a half years, he snapped up the raja’s remaining cars.

Today, he has an enviable fleet of 370 cars, 109 bikes, 150 trucks and buses, 43 jeeps, 56 vintage tractors and 45 carriages. As managing director of 21 Gun Salute, which holds India’s only Concours d’Elegance—an international competition for classic cars—he is the only Asian to have judged eight Concours events. “I have done my best to put India on the world’s heritage motoring map. All this single-handedly, with my own funds,” says Yadav, who won the ‘Personal Achievement Award’ at The Historic Motoring Awards in London in 2018.

He talks about how a younger set with high disposable income in their early 30s is beginning to invest in vintage cars today—an echo to his past. But what has him excited is the online marketplace. He is part of a new initiative called Historic Auctions, with Maharaja Manvendra Singh Barwani and six others. Historic Auctions will hold its first online auction for vintage cars in November. All seems to be in fine fettle in the charming world of vintage cars, with the pandemic hardly causing a bump in the road. Except this one glitch.

The Ministry of Road Transport and Highways released a new set of rules for registration and certification of vintage vehicles in a draft policy in July. While most stakeholders welcome the move, there is one aspect of restricted use that has caused concern and confusion. A sub-clause reads, “Vintage motor vehicles shall not be driven or plied on the roads for regular purposes and shall not be used for any commercial purposes whatsoever.” Commercial purposes also entail renting out vintage cars for weddings, photo-shoots and period movies.

“It is illogical to say that these cars cannot be used for commercial purposes. It is personal property and can be given on rent as and when [owners] wish to. How it will harm anyone is beyond my understanding,” says Yadav, who wants to build a state-of-the-art museum for his collection by 2025 in Gurugram.

Rupali Prakash is fond of her British sports racing cars. She has driven 1,400km across the Rann of Kutch in her 1956 Triumph TR3. Her father, Dr Ravi Prakash, is said to be the biggest vintage car collector in Bengaluru. Rupali prefers not to discuss the size of her collection. People tend to focus more on the size than passion, she says. “When you give people a number, they ask, ‘Oh, how many cars do you buy in a month?’” she adds, a touch irritated. 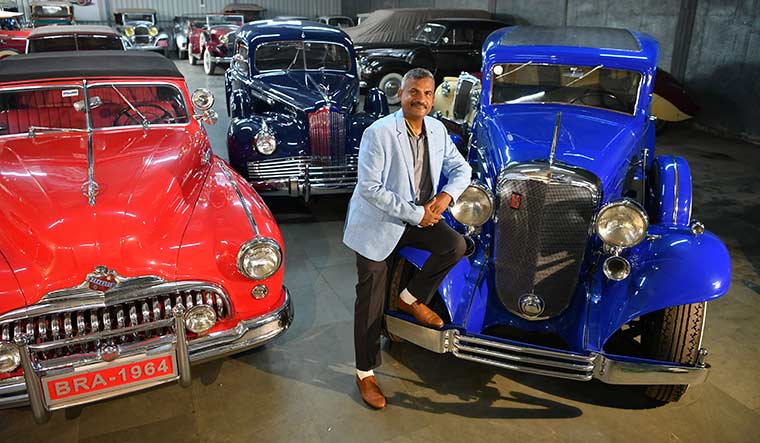 An active member of the new generation of vintage car connoisseurs, Rupali is an official of the Federation of Historic Vehicles of India and youth adviser at Fédération Internationale des Véhicules Anciens. An automotive illustrator, she runs Classic Chase, which restores and rents out vintage cars.

For now, her company is only into merchandising and renting out vintage carriages. “We have had 1,000 events over the last eight years, with people just wanting a piece of vintage cars. But now so many people call me and are disappointed to learn that we have put renting out cars on hold,” says Rupali, whose family, too, plans to build a museum soon. “I have had couples who shifted their wedding dates to be able to use these cars. This one couple did not want any friends or guests at their wedding, just a vintage car to get to the temple.”

Renting out vintage cars for weddings is a trend that started in Delhi and Mumbai some 10 years ago. Bollywood further fuelled it. In Zindagi Na Milegi Dobara (2011), Farhan Akhtar’s character pines to rent a blue 1949 Buick Super Convertible. 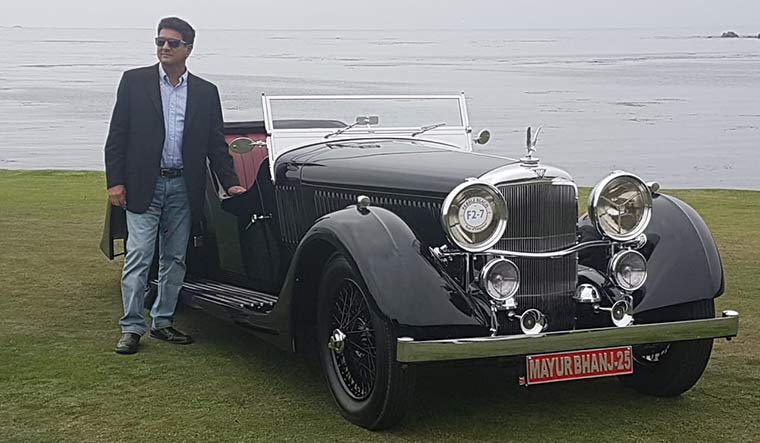 Nitin Dossa, chairman of the Vintage and Classic Car Club of India.

Rupali says there is a huge market for vintage cars now. “It is a seller’s market,” she says. “Buyers are ready to pay anything. An Austin MINI Cooper that was 015 lakh can now go up to Rs45 lakh.” She finds the ‘no commercial use’ sub-clause “generic”. There is a whole ecosystem that survives on commercial use, she says. “How do you even preserve them when no one else is allowed to experience it?” she asks. “Maintaining these cars is very expensive. They need to go out. They need to be used. Why should it only be restricted to the owners?”

Nitin Dossa, chairman of the Vintage and Classic Car Club of India, says there is no confusion. “A privately registered car is not allowed to be rented out according to The Motor Vehicles Act, 1988,” says Dossa, who helped draft the new rules. “Similarly, if you want to rent out vintage cars, you will now have to take another registration for public transport, like the yellow number plate. You will have to run it like a taxi service, in short. There is no need to re-register old numbers, but you cannot rent them out anymore.”

The new rules do not bother Abdul Rashid Ghani from Jaipur. “These are just suggestions under consideration. It has not been made into a law,” says Rashid, whose family-owned Rent A Heritage has been renting out vintage cars for the last 25 years. His collection of 30 cars includes Fords, Dodges and a rare 1929 Erskine that belonged to an Agra-based doctor who practised in British India. “But if it becomes a law, vintage cars will vanish from the scene,” he says. “No one will maintain it. Whatever we earn from renting them out, we pour it back in, keeping them alive.”