In book, ex-Pak envoy to India explains why Islamabad’s Kashmir policy is floundering

Despite decades of high decibel rhetoric and diplomatic and military support to militants, Pakistan is largely on its own vis-à-vis the separatist campaign in Jammu and Kashmir. Abdul Basit, Pakistan’s High Commissioner in India from 2014 to 2017, frankly tells us why in this must-read book.

If Basit is to be believed, the Pakistani establishment is not sincerely committed to the Kashmir cause. The only Pakistanis who are genuine are apparently people like Basit. The worst offender is the Ministry of Foreign Affairs (MoFA), whose brass “was totally bankrupt professionally”. Pakistan’s diplomacy lacked coherence and the requisite aggression. “Kashmir has never been our priority in the real sense,” he writes.

According to Basit, no Pakistani ruler has performed creditably on Kashmir. Pervez Musharraf may have wanted a mutually acceptable solution, but floundered in diplomacy. Nawaz Sharif, who appointed Basit in Delhi but later ignored him, was too soft on India and pandered to it unilaterally. Even the report card of Prime Minister Imran Khan is not very encouraging.

Basit says diluting focus on Kashmir by raising issues which Pakistan has long forgotten makes no sense. He cites a new political map unveiled by Islamabad that includes the former princely state of Junagarh in Gujarat. “Pakistan should stop projecting Kashmir as an Islamic issue. Pakistan is itself to blame for the international indifference,” he writes.

Basit recalls the humiliation suffered at the hands of the MoFA during his India stint. His problems with the ministry began when he was first told while in Berlin that he would be Pakistan’s foreign secretary. This did not happen. When he met journalists in Delhi, he was ordered to cut down his media engagement. “All our telephones (in India) are tapped,” he writes. “Indians were listening to our conversation…. Calling me and admonishing me on the landline was hardly professional.”

Much to Basit’s chagrin, the MoFA worked through the Indian High Commission in Islamabad and not through him. “In diplomacy, there could not be anything more Kafkaesque than this; a state undermining its own established channels of communication… I was considered an outsider,” he writes. He found it silly that Sharif was soft on Modi, “a reprehensible and despicable figure for Pakistanis in general”.

Basit was frequently undermined by Islamabad, particularly after his meeting with Hurriyat leaders led to the axing of a bilateral dialogue in Islamabad. He says a “deeply-entrenched mafia” in Islamabad wanted to cut him to size. Things became so bad that Basit was not even kept informed about important things like telephone conversations between the Indian and Pakistani prime ministers. The Pakistan foreign secretary told officials not to send any communication to Basit without his say-so. A time came when Basit felt India “must have also realised that, at the end, nobody (in Islamabad) listened to me”. A disgusted Basit sought a transfer from India. Even after he chose August 2, 2017, to leave India, he kept getting calls from Islamabad asking when he would pack up.

Basit wants Pakistan to name a special envoy for Jammu and Kashmir and revoke the 1972 Simla agreement to end the shackles of bilateralism on the Kashmir dispute. “Pakistan urgently needs to break the crust of its unacceptable complacency to make a real difference on Kashmir,” he writes. He wants Pakistan to close its airspace to Indian airlines at least once a week or fortnight. The Kashmiri struggle “has to be reinvigorated on both political and military fronts”, he says.

He finds fault with all the moves Islamabad made after India abrogated Article 370. “We continue to make hortatory and didactic statements to jolt the world’s conscience on Kashmir, but the world appears to have stopped listening… Even countries like Turkey and Malaysia have lost interest,” he writes. 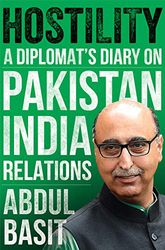