In the wee hours of July 1, 2018, 11 members of a family—two men, seven women and two children—were found hanging in the living room of their house in Delhi’s Burari area. The only survivor was the family’s dog, who was tied to the roof. Its ferocious barking was noticed only after more than 24 hours had elapsed since the event.

Videos and images that went viral on social media shook the nation: 11 members hanging from the roof, colourful dupattas knotted around their necks, hands and legs bound with wire, blindfolded, gagged, and ears stuffed with cotton. It was mind-boggling, almost straight out of a crime thriller.

The case captured national headlines for weeks thereafter with the case being transferred from the local police to the Crime Branch. For months, the agencies could not establish why an educated and functional family killed itself in what seemed to be a well-planned, carefully thought-out event.

As per reports, the agencies did consider multiple theories, including murder, but the CCTV footage showed that no outsider had entered the house in the 24 hours prior to the crime. Eventually the case was closed, leaving behind a trail of unanswered questions. On October 8, Netflix brought it back into focus through a docu-series titled House of Secrets: The Burari Deaths, directed by Leena Yadav of Parched (2015) and Rajma Chawal (2018) fame.

Yadav’s docu-series, comprising three 45-minute episodes, takes the viewer through the crime, and the many theories associated with it, without overly sensationalising the issue. The series does highlight the ‘absurdity’, ‘shock-value,’ and ‘bizarreness’ of the entire “operation” through testimonies of experts, crime reporters, law enforcement officials, psychiatrists, doctors who performed the autopsies and other prime sources. The narrative is immersing, even if one might be familiar with the case.

As per the investigation, it was the youngest and mentally-ill son, Lalit, who instigated the incident, demanding the complete submission of the other family members, including two 15-year-old boys and two 25-year-old women. Hand-written notes found in diaries from the house revealed that Lalit used to be “possessed by the spirit” of his dead father and that his commands were unquestioningly obeyed by the other members.

The family hanged itself from an iron grill fixed to the roof, upon his command that they perform a ‘badd puja’—a religious ceremony invoking a banyan tree. The suicides happened just 14 days after the engagement of one of the daughters, Priyanka, an MBA graduate, where the family members were seen partying and enjoying themselves. They were upwardly mobile with a social media presence. 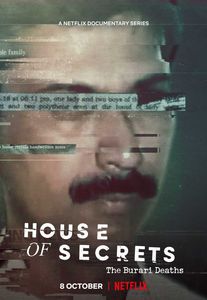 The docu-series is shot in the bylanes of Burari, and archival media footage has been used to recreate sequences. The impact is chilling, thanks to a compelling screenplay. By the end of the series, one is bound to get goose bumps. But the drawback is that there is no sense of finality. Although a line-up of experts dissects Lalit’s psychology and the family’s dynamics, in the end, one is left with more questions than answers.

House of Secrets: The Burari Deaths