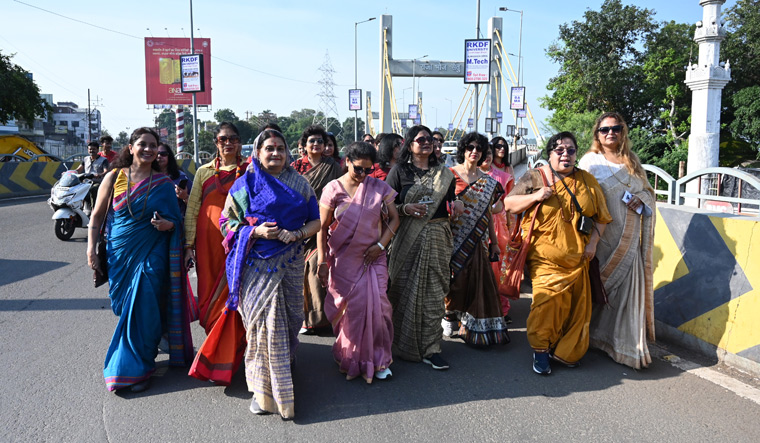 Khadi love: The Khadi Dandi Walk was organised by Saving the Weaves, a group of sari lovers | Mujeeb Faruqui

On April 6, 1930, the crowd broke into cheers when Gandhi lifted a fistful of salt-laden clay from a beach on the Gujarat coast. He had walked 24 days from Sabarmati Ashram in Ahmedabad to the village of Dandi. Although women had been mostly excluded from the march, many of them were not deterred. When Gandhi was arrested on May 5, these women took over the movement. They organised processions and other programmes in different parts of the country. The beaches at Chowpatty and Juhu, for example, resonated with the women’s rallying cry of Inquilab Zindabad.

Ninety-one years later, another group of women went on a walk; not in protest this time, but in celebration of Gandhian ideals. Their emblem was not salt, but khadi. The serene environs of Bhopal’s Kamla Park filled with colour, beauty and enthusiasm on October 2, as a bevy of women clad in hand-woven saris—mostly khadi—gathered for a ‘khadi dandi walk’. The heritage walk was organised by Saving the Weaves—a group of four friends and sari lovers.

“During the lockdown we kept on purchasing saris from traditional weavers so as to keep them going,” said Anupama Sharma, one of the four friends and a professor of architecture with the Maulana Azad National Institute of Technology (MANIT). “When the second lockdown ended, we decided to do something special to promote saris and hand weaves. The occasion of Gandhi Jayanti gave us the perfect opportunity.”

The 50 women walked from Kamla Park, which is actually the top surface of the earthen dam on the historic 11th century Upper Lake, to Raja Bhoj Setu, the hanging culvert over the Upper Lake, to the 200-year-old Gauhar Mahal. They were educated on the history and heritage of these sites by Savita Raje, associate professor of architecture at MANIT. Clad in an ochre yellow khadi sari, she told them about the 18th century palace built by Gond rulers on the eastern edge of the park and about Gauhar Begum, the first of four female rulers among the Bhopal Nawabs, who built the Gauhar Mahal.

The palace, she told them, was unique among the contemporary palaces of Islamic rulers because it was the first to do away with the separate mardana (male) and zenana (female) sections.

The four friends—Sharma, pediatrician Dr Shalini Gulati, social worker Dolly Sharma and head of department of management, MANIT, Shuchi Srivastava—intend to help preserve the livelihoods of traditional weavers by promoting hand-woven saris. Between the first and second lockdowns, they travelled to meet weavers in places like Chanderi in Madhya Pradesh and Banaras in Uttar Pradesh. The khadi walk was their first big event.

“It felt good that during the 75th year of Independence, we had the chance to promote saris, our traditional attire, and khadi, the symbol of our Independence struggle,” said Kiran Agrawal, chairperson of the Bhopal-based SAGE Group and one of the walkers. So many years after Independence, the ideals of the Gandhian women of then and today remain the same—freedom, simplicity and self-reliance. After all, they were all walking in the footsteps of the one who said, “If we had the khadi spirit in us, we would surround ourselves with simplicity….”