Behind the bold characters he essays, Vicky Kaushal is a study in nuances 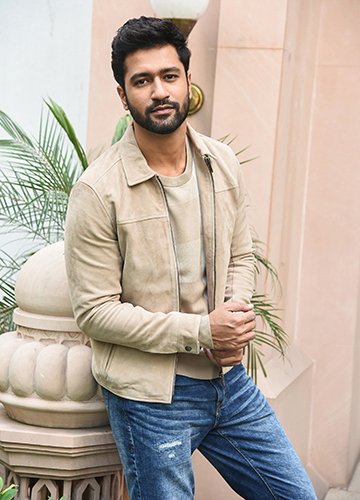 In 2019, a surgical strike at the box office established Vicky Kaushal as a bankable lead actor. This month, the Uri star headlines Shoojit Sircar’s Sardar Udham—a film based on revolutionary freedom fighter Udham Singh—premiering on Amazon Prime Video on October 16.

Movies inspired by true events seem to be a recurring theme for Vicky, with a biographical film on Field Marshal Sam Manekshaw also in the offing. “I didn’t plan it that way,”the actor says, reiterating that these scripts were simply too compelling to decline. “But I don’t see myself signing another biopic anytime soon.”

By his own admission, Vicky is “not very adventurous at heart,”though he plans to consciously explore other genres of film once he has concluded his current commitments. “I’m the guy who will choose the same flavour of ice-cream for years on end,”he says. Ironically, he has been the ‘flavour of the season’since Uri and while this fact is not lost on him, he wears his success with humility.

“I had never planned on being an actor. In fact, I was very shy as a child…always happy to be lost in the crowd,”Vicky says. Despite his proximity to the film industry (his father is action director Sham Kaushal), he never hung around film sets, or hankered for that life. A bright student who “loved maths, but hated mugging up passages in literature,”Vicky was all set to pursue engineering in the field of electronics and telecommunications. “That’s what I was doing when I graduated in 2009, but then I took a complete detour,”he says. Looking back, the actor recalls only two occasions when he accompanied his father to work.

Life has come a full circle for Vicky, who now spends hours on end at film sets, and months at a time on location for shoots. “When you travel for a shoot, you are usually parked in one place for a while, so you settle into it after a day or two. But when we used to go on promotional tours, there were days when I didn’t know where I’d woken up,”he says. “Hotel rooms can be disorienting. I have wondered, ‘Is it Cochin or is it Gujarat?’but that doesn’t happen nowadays because of Covid. Most promotions are digital.”

While on the subject, we ask about his 9.8 million (and counting) Instagram followers, and the pressure of keeping up with social media. “I don’t think about it too much,”he says. “Instagram is the only platform that I use frequently; I had joined Twitter but I’ve stopped using it completely because it’s just not good for my frame of mind. I really enjoy Instagram, but I am that guy who would sometimes upload three posts a day and sometimes just vanish for three weeks. I don’t feel pressured or compelled to be active on a digital platform daily.”

Navigating what to post and what to hide away from the public eye is another conundrum for most celebrities, but Vicky has a roadmap for this too. “I do consciously keep certain things out of the public eye,”he says. “I have learnt in this journey so far, that it is important to safeguard your personal life to some extent. Once it is out in the public domain, it’s totally open for discussion. And the discussion is often not backed by truth…and the story just goes all over the place. Then you end up having to give an explanation for everything that is getting discussed; when you really don’t want to put yourself in that position.…”

No subject is out of bounds when it comes to work though.

Vicky tells THE WEEK all about his endless hours of reading and prep for Sardar Udham, though he credits director Shoojit Sircar for providing the framework and guidance needed to play the part of the freedom fighter best known for assassinating Michael O’Dwyer in London, to avenge the Jallianwala Bagh massacre of 1919.

“The advantage that I had, in terms of nailing the lingo or understanding the culture of the character, is that I am a Punjabi who was raised listening to these stories,”he says. “In fact, I feel like it was culturally engrained in me from an early age. The challenge was in recreating a person who was really a man of mystery…there isn’t much first-hand information on him to go by. He had different names and identities, he was under the radar for most of the time, nobody knew where he was, or who he was.

“We took what we could from facts and documents, but, for me as an actor, it was important to touch the honest note of his emotional state of mind. To understand how a person can live with this pain and angst for 21 years; what he must have seen on one evening that just changed him as a person forever. I relied greatly on Soojit da and his years of study and understanding of the freedom struggle. His take on revolutionaries is completely different, so he sees Udham Singh as a friend or an ally and that’s how he wanted me to portray the character—not as some superhero, but just as one of us.”

From Major Shergill in Uri to Udham and Sam Manekshaw, Vicky has inadvertently become a poster boy for biopics of national heroes, but he insists this has not changed his view of what it means to be Indian.

“I may have studied these milestones in our history better now, but I don’t think that has made me newly patriotic,”he says. “It has just intensified what was already there.”Despite that, Vicky does not commit to having strong political views. “To really justify having strong political views, I think one must keep up with things on a daily basis. My profession at the moment doesn’t allow me to do that,”he says.

“Besides,”he adds, “today’s politics and the discussion around it is contaminated by the fact that most of this conversation happens on digital platforms. Not everything that’s being shared is the truth. What do you believe? Nothing is black and white and when things are all grey, one has to read the nuances.”

Behind the bold characters that he essays on screen, Vicky himself is a study in nuances. Emotional when he talks about his mother (whom he credits for believing in him and “blessing”his career), enthusiastic when he talks about brother Sunny (“the coolest member of our family”), candid when he discusses his passion for acting, and guarded on the subject of politics or his romantic life.

The better part of an hour spent in his company is barely enough to scratch the surface. A deep dive beckons but, until then, Sardar Udham must suffice.