Tansha Vohra has a freezer full of ants in her Bengaluru home.

She has been using them in different kinds of chutneys. Vohra is one of two fellows this year at the Serendipity Arts Foundation’s residency programme in culinary arts in Delhi. Over the phone from Bengaluru, Vohra talks excitedly about entomophagy or the practice of eating insects.

She recalls eating silkworms in the northeast, and why termite farming may not be a good idea as it releases methane gas. Vohra sends me an image of her lunch thali on the day we speak in mid-August. A small white bowl on a plate of vegetable gravy and rice; in the bowl is ant chutney made with coconut, chilli and garlic. She just took a handful of ants (adults and larvae) and ground them in a mortar. Some coconut flakes, two chillies, five garlic pods and sprigs of wild coriander were blitzed together with crushed weaver ants, spring salt and a sprinkle of water. “I wouldn’t say it is normalised in my house but definitely my folks are not as freaked out as they used to be,” says the 29-year-old; her mother and brother have gotten around to relishing her arthropod concoctions.

As part of her three-month residency, Vohra will dig into recipe collections, understand seasonality, foraging and harvesting methods, and the many cooking and preservation techniques, from smoked to sundried, employed by traditional communities for insect meals.

Ever mindful of cultural appropriation, Vohra emphasises that her work is a curiosity-driven exercise. “The idea of the project is to document, research and archive information from historically excluded communities in the hope that we will be able to craft real solutions to the huge issue facing us all—a global food crisis,” says Vohra. 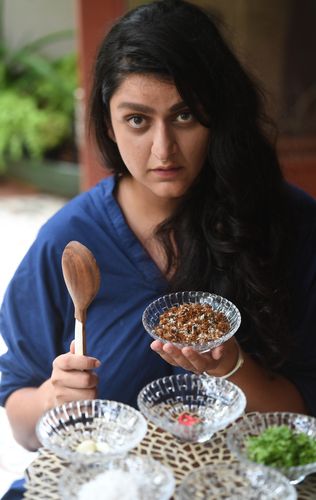 Absolutely delicious: Vohra with a bowl of weaver ants, after whipping them into chutney | Bhanu Prakash Chandra

It was in a permaculture farm in Goa back in 2018 that Vohra discovered insect eating. Being a city-bred food writer herself, she was keen to immerse herself in an ecological set-up where agriculture is self-reliant and gives more by using less. The ecosystem in her chosen village had plenty of animals; from cats, chickens, ducks and geese to dogs, snakes, turtles and sheep. Vohra would also see cocoa trees in fruit. In the monsoons, red weaver ants would build their nests by knitting together leaves with wispy white larval silk. When Vohra and her peers wondered what would become of the cocoa pods if the pests continued building their nests, their teacher Peter Fernandez had an idea. “Why don’t you just eat the ants?” he suggested. Needless to say, Vohra’s jaw dropped in surprise. But unease gave way to curiosity, followed by acceptance.

Soon Vohra was foraging for red weaver ants in the garden and whipping them into chutneys, chocolate, juices and lemonade—except there were no lemons in it. The weaver ants have formic acid, which is very sour. It does not come as a surprise when she sincerely wondered then, “Why aren’t people eating more insects?” 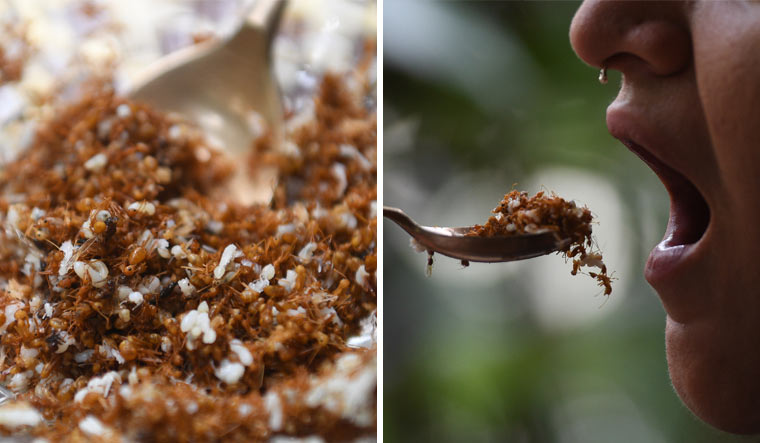 More than two billion people consider bugs to be part of their essential diet; it has been harvested and consumed for thousands of years. Beetles, wasps, bees, ants, grasshoppers, crickets, dragonflies, termites, locusts and stinkbugs make it to an ever-growing list of over 2,000 edible insects. India, itself, has a rich tradition of insect-eating; there are over 300 edible insects eaten across cultures and communities in at least 10 states—from the larvae of date palm weevils in Odisha’s Rayagada district to red ant larvae, a delicacy in Assam. Insects are considered high-protein, low-tech edibles with minimal carbon footprint. Even the United Nations has urged people to eat more insects; a much-touted 2013 report by the Food and Agriculture Organization says insects, an “underutilised resource”, could be one of the answers to a looming food crisis. The global market for edible insects is set to grow to $2 billion in 2023. Insect meals have fine-dining cred. Maverick chef René Redzepi of Noma has served creme fraiche dotted with live ants. Others have tossed up cricket crepes and mealworm hummus, mescal worm tacos and tomatillo grasshoppers. There are protein bars in the US made of cricket flour.

“Fried termites make the best teatime snack,” says Lobeno Mozhui, who was recently awarded her PhD degree from the zoology department of Nagaland University. Her thesis essentially revolved around edible insects and their nutritional analysis and folk medicinal uses. Mozhui is one of Vohra’s key collaborators in the project. Beyond work, she loves carpenter worms, hornet and wasps larvae, water bugs and beetles. “But one needs to be careful about gastrointestinal allergies before consuming them,” warns Mozhui. After thoroughly cleaning them, she boils them in water with tomatoes, green chilies, dry bamboo shoot, mashed garlic and ginger. She says Arunachal Pradesh has the highest consumption of edible insects in India.

Mozhui thinks Vohra’s work assumes importance because it has an element of advocacy. It aesthetically explains entomophagy to a wider audience as a culinary art project and is aimed at dismantling perceptions of disgust associated with certain kinds of food in urban centres, especially in north India. “When I go to Delhi with my samples in roasted or fried form, so many people hold their noses in distaste. People think insect-eating is about cockroaches and mosquitoes. This needs to change,” says Mozhui.

Thoroughly clean the hornet larvae and pupae before cooking.

1 Slice 10-15 pieces of fresh green chillies and put them into a cooking pot.

3 Add the thoroughly cleaned larvae and pupae to the cooking pot.

4 Add salt and mix all the ingredients properly.

6 Now add a handful of dried bamboo shoots and 1 tablespoon each of minced garlic and ginger.

7 Simmer the flame and cook until dry.

8 The hornet dish is now ready to be served.