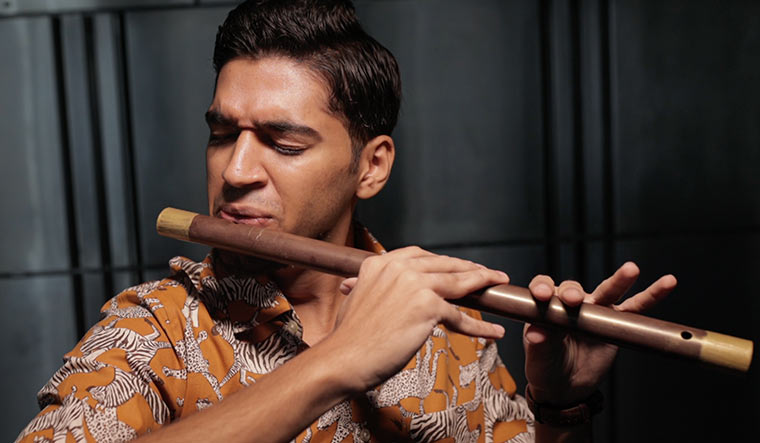 How does chocolate sound?

From the crackle of foil while unwrapping a bar to the crisp snap while breaking it to the laughter, gasps and whispered sweet nothings that follow, the sounds that accompany chocolate are many. Sometimes, even silence is a good accompaniment for chocolate.

But, what does chocolate actually sound like? Well, it sounds remarkably like a flute, for now at least. And for that we have two men to thank: master pastry chef Vinesh Johny and ace flautist Parth Chandiramani, both from Bengaluru. Johny and Chandiramani together made what could arguably be the world’s first playable, chocolate flute.

For long, Johny had been wanting to craft a musical instrument out of chocolate and his ambitious project was backed by impressive credentials. After graduating from culinary school at Christ (Deemed to be University), Bengaluru, he worked with the Oberoi and Starwood groups before he became a teacher.

He is now co-founder and executive pastry chef of Lavonne Academy of Baking Science and Pastry Arts, Bengaluru. The academy is “India’s first international specialised baking academy” and it is affiliated to City & Guilds, London. He co-founded it in 2012 with chefs Avin Thaliath and Lijo Eapen. Johny was all of 24 when he started Lavonne, and interestingly, Thaliath taught him in Christ.

With the multiple lockdowns forcing him indoors, Johny found himself watching more and more music videos, and thus was born the idea of the chocolate flute. “He called me one day and said, ‘Bro, I have been watching these flautists, so would it be possible to make a chocolate flute?” said Chandiramani. “The mechanics of a flute are simple. So, I was confident that we could make some sound from a chocolate pipe. But I was not sure if it could be tuned and played. And, I had never ever made a flute, let alone a chocolate one.”

The US-born Chandiramani, 28, grew up in Bengaluru; he was six when he started learning to play the flute. Later, he joined the Raghu Dixit Project for five years before launching Bryden-Parth with friend and guitarist Bryden Lewis. Bryden-Parth’s first album is due later this year, or in early 2022. Bryden-Parth also works with The Choral Riff, a nine-member choir based in Bengaluru.

It was with the backing of this varied experience that Chandiramani set out to work with Johny, who was firm that the flute should be all chocolate and edible. “One challenge was temperature,” said Johny. “The chocolate flute had to be held at two places and blown into at one place, so we had three places where heat would be generated. Maximum heat would be at the blow hole, of course.”

So, Chandiramani landed at Lavonne with a bunch of flutes and the duo set out to pick the best model. Chocolate pipes of different lengths and thicknesses were made. “The thickness of the pipe affects the pitch,” said Chandiramani. “And, even with bamboo flutes, temperatures affect pitch. Higher temperatures yield sharper notes and colder temperatures produce flatter ones.” 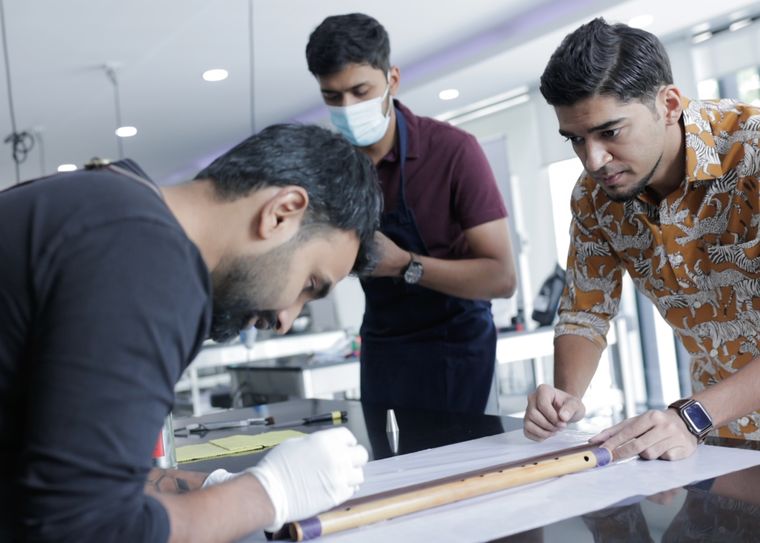 Eventually, the duo agreed that the final flute would be modelled on a C-scale bamboo flute from Chandiramani’s collection. So, chocolate pipes were made to match the flute, and precise holes were bored with heated piping tips.

“A thinner chocolate tube sounded better, but would melt faster; thicker tubes did not produce the sound Parth was looking for. So, we kept experimenting until we reached an optimum point,” said Johny.

The chocolate used was 58 per cent dark; only cocoa solids and cocoa butter was used in the flute. The duo made around 10 tubes before they got the perfect one.

So, what happened to the flutes that broke? “We ate them,” quipped Johny. “But, after a point it did not make sense to eat so much chocolate.” Chandiramani said that he would have been heartbroken if one of his bamboo flutes broke, but he was happy when the chocolate ones fell apart. More to eat, see!

So now they had a chocolate tube with uniform diameter and thickness, and the holes were spaced based on Chandiramani’s requirements. Time to pick the music! Chandiramani picked pieces set to music by A.R. Rahman: The title song from Saathiya (2002) and Urvasi Urvasi from Kadhalan (1994). To keep the temperature down, Chandiramani played it in an airconditioned room. “The temperature setting was at 18°C,” said Johny. “But, in real I think it would have been in the low 20s.” 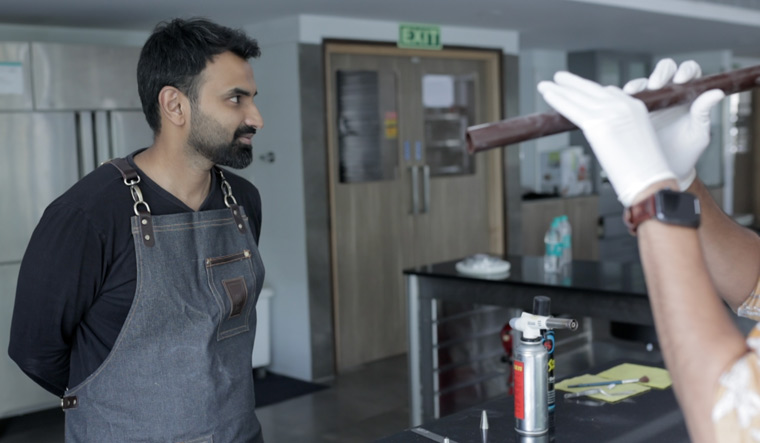 The most challenging part of the flute construction, both Chandiramani and Johny agree, was making the head-joint cork. As the name suggests, this part is usually made out of rubber or cork and sits close to the blow hole. The head-joint cork is adjusted to get the ideal pitch. As Johny was sure that every part of the flute should be edible, this part, too, had to be crafted out of a chocolate cylinder. And, it worked.

So, now that the ambitious project is done, what is the duo up to? “Well, we have been friends for long, but this is a one-time brainwave or madness, depending on how you look at it,” said Chandiramani, amidst chuckles. “So, until the next madness, he will do his thing and I will do mine.”

So, while Chandiramani focuses on the upcoming album, Johny has his hands full with the WorldSkills 2022 competition, which focuses on “skills excellence and development”. He is the chief expert for baking skills for the competition and also coaches the Indian baking team that will fight it out in WorldSkills. The team chosen from all over India will train at Lavonne before heading to Shanghai for the competition next year.

There is also the little matter of the lonely Triumph Bonneville, which has spent too much time in the garage; Johny used to take the bike out for a weekly spin, until Covid closed the roads. And, of course, spending time with his wife; Joonie Tan is a Malay pastry artist and owner of 180 Degree Celsius.

Johny and Parth are also in touch with Guinness to get the flute into the record books.