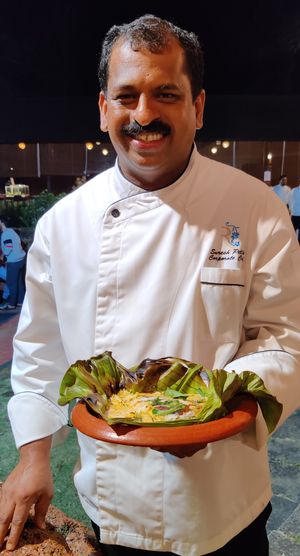 Hungry for more: Pillai with his signature dish, neymeen nirvana

Chef Suresh Pillai, a former contestant on the BBC’s MasterChef reality show, has transformed many lives. He made many who survived on noodles and cereals into culinary enthusiasts with his appam (rice pancakes), neymeen (seer fish) nirvana, coconut milk prawn fry and other specialties. His cooking videos have only heightened his fame during the lockdown; a recent one got 7.5 million views.

Pillai’s cooking is the stuff of legend. Whether it is the Kerala sadya for Virat Kohli, the butter chicken and naan for Roger Federer, the Sri Lankan kottu rotti for Tiger Woods, or the burnt chilli chutney for Shashi Tharoor, Pillai has catered to some of the biggest names. He created the initial version of his signature dish—the neymeen nirvana (pan-fried fish cooked in thick coconut milk)—for Chris Gayle when the Jamaican cricketer asked Pillai, while on a houseboat in Kerala, whether he could try something new with the freshly-caught pearl spot.

Pillai, 43, who is currently the corporate chef and culinary director of the Raviz Hotel in Kollam, says he learnt more from fishermen than from cookbooks. “I lived on an island by the Ashtamudi lake [near Kollam],” he says. “One of my neighbours, a widow, ran a tea shop. It was a humble place that offered puttu (steamed rice cake), chickpeas and tea to fishermen who returned to shore with a good catch of snapper and groupers in the wee hours of the morning.” Pillai would help her, earning Rs20 per week. He would talk to the fishermen and learn about fish.

Though he comes from a poor background, dinner would be a grand affair in his home. “My mom was a great cook,” he says. “She would make Kerala-style sardine fish curry with Malabar tamarind. Sardine curry and ration rice is a delicious combination.” After his class 10, Pillai was not accepted into any college. Not knowing what to do, he took up the job of a security guard. Later, he was hired as a waiter with a salary of Rs450. He decided to make up for his lack of formal training by self learning. Fascinated by toddy shop cuisine, he learnt a lot from the cooks at such shops. “They use their own spices. Also they cook on firewood. Wood-fired, slow-cooked meat tastes great,” he says.

Gradually, the cook turned into a chef. During a stint at Coconut Grove in Bengaluru, he explored Coorg, Konkan and Chettinad cuisine. Joining The Leela Palace was another turning point in his career. In 2017, Pillai became one of the few Indian chefs who made it to the BBC’s MasterChef. At the age of 39, he drew a salary of Rs5 lakh. Looking back on his journey, Pillai says he spent most of his life on islands, which groomed him into a seafood specialist.

Pillai knows that a fresh twist can make a traditional recipe more exciting. As I discovered after trying out his recipe for a Kerala dish called ‘avial’, marinating the vegetables for 20 minutes enhanced the flavour of the dish. Now, Pillai’s dream is to set up a culinary academy in Kerala to impart to others his knowledge of seafood and many forgotten recipes. “Not everyone is blessed to be born on an island,” he says with a smile.