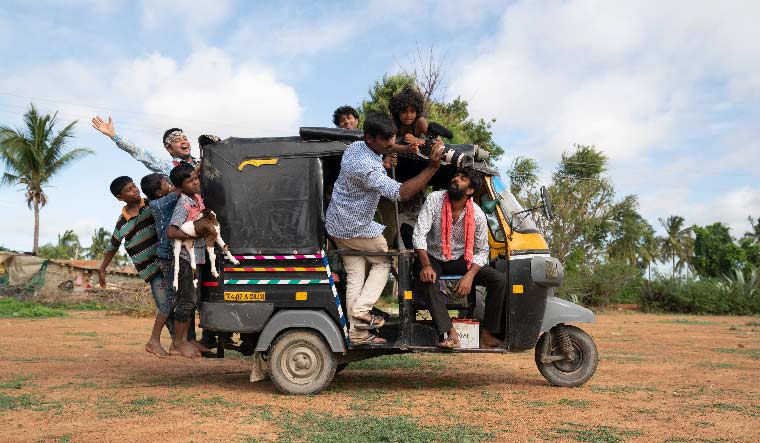 Cinema Bandi teaches a valuable lesson on the importance of using local dialects in films. For long, the Telugu film industry has mainstreamed the dialect spoken in coastal Andhra. There were a few instances where a diluted version of the Rayalaseema dialect was used in films that discussed the region’s factional violence. Then came the recent crop of coming-of-age films that used the Telangana dialect. But, for Cinema Bandi, Praveen Kandregula chose a dialect that is sparsely spoken in both Telugu-speaking states.

“This is a dialect that was never heard before in movies,” said the director. “We wanted everything to be new in Cinema Bandi. This dialect is found in areas bordering Karnataka. It is a mix of Telugu and Kannada.”

The Netflix film began streaming in May and quickly went viral. The dialogues stand out from the very first scene, and carry a freshness that stays with you long after the movie had ended. So particular was Kandregula about getting the dialect right that he chose actors from Karnataka, including the lead, Vikas Vasistha. Filming was done in a village close to Kolar in Karnataka.

Cinema Bandi tells the story of an auto driver, a barber, a photographer and a vegetable vendor, among others in a village, who want to make a movie after they chance upon an expensive camera. Cinema Bandi’s locales are natural and the characters simple. No exaggerated fights or dreamy romantic sequences.

For Telugu cinephiles, the film is a pathbreaker. “It moved away from popular cinema narration. It proved that you can make a movie in a village with [just] an idea and limited resources,” said film critic Kathi Mahesh. “The obsession that Telugu people have for cinema is well-known. Since the digital revolution, many want to work in films. This movie represents that group.”

In the Telugu industry, it is staple for films to have a popular face to pull in crowds. Cinema Bandi is that rare exception that did well without stars. “Thanks to OTT platforms, we are recognising actors based on their performance,” said Mahesh. “We let them prove themselves because we have not bought a ticket.”

“The movie was the top trending film on Netflix. This is equal to a blockbuster for me,” said Kandregula. “I went through a lot of reviews. The movie was compared to Bicycle Thieves (1948), which is an inspiration for me.”

Most of the actors in Cinema Bandi have done theatre before. But Kandregula effectively used even a local resident of the village with no acting experience to pull off a memorable role, without any lines. He plays an old man who is roped in as a writer.

For Kandregula, shooting the climax with the villagers was an emotional moment. “I had tears in my eyes,” he said. “I took pride in being part of cinema at that moment.”

This bandi (vehicle) has taken a unique route to touch the hearts of the audience.