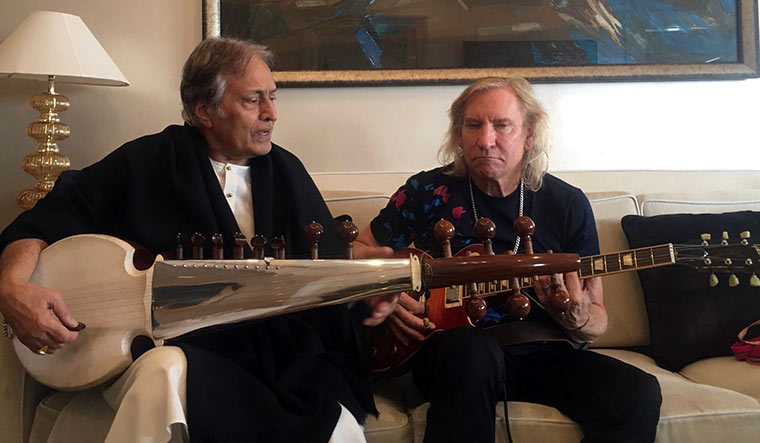 "There’s something about that song that haunts you,” remarked a pensive Martin Luther King Jr, as he sat in his car after a school programme in Tennessee in 1957. He was referring to folk singer Pete Seeger’s rendition of ‘We Shall Overcome’ at the event. The song would later become the anthem of the American civil rights movement, before making its way east. In India, Girija Kumar Mathur translated it to Hindi in the 1970s, and captured the hearts of Indians in the decades since. Few songs conjure up feelings of patriotism and hope quite like ‘Hum Honge Kamyaab’.

In late 2019, two sultans of strings—one from the east and the other from the west—collaborated to render a rock raga version of this song of hope. Sarod maestro Ustad Amjad Ali Khan, Eagles’ guitarist Joe Walsh and a team of musicians close to them recorded a three-track EP to fulfil their desire to “communicate through music”. Little did they know that a pandemic was brewing and the world would soon be running on nothing but hope. (Or, maybe the sagely septuagenarians were just prescient all along!)

Finally, after nearly 18 months, the fruit of their labour will see the light of day. Prayers will be released by Universal Music Group on June 4 on all streaming platforms.

“Prayers is a tribute to all doctors, nurses, frontline workers and people who serve,” Khan told THE WEEK. “In India, music is therapy. The medical world has slowly realised that. Music can heal. So, it is our prayer through this album that the planet should heal faster and we should begin our lives once again.”

The three tracks are titled ‘Healing Love’, ‘Goddess’ and ‘Hope’ (We Shall Overcome). Khan lends his voice for ‘Healing Love’, while the other two tracks are purely instrumental. The duo is joined by Khan’s sons Amaan Ali Bangash and Ayaan Ali Bangash—both established sarod players in their own right—who often jam with Walsh. The star-studded line-up also includes drummer Stewart Copeland (of The Police), bassists Nathan East and Leland Sklar, keyboardist Ed Roth and guitarist Davey Johnstone (Elton John’s lead guitarist). Hollywood’s favourite percussionist, Satnam Ramgotra, is on the tabla.

For Walsh, this was a unique experience. “My knowledge of western music did not prepare me for this journey,” he told THE WEEK. “The most memorable experience was trying to grasp the scope and depth of Indian music in the presence of such a grandmaster as Amjad Ali Khan.” His interludes in the EP are reflective, sombre notes—a world away from his iconic, climactic guitar riff in Hotel California.

“This project had minimal composition as it was delivered from a higher power and we allowed it to flow through us,” said Walsh. “This was creative spontaneity.”

To Walsh’s benefit, he makes his foray into rock raga in the good company of Khan, who is well-recognised in the west for his frequent collaborations with symphony orchestras, classical guitarists and anybody willing to speak the universal language of music. If Pandit Ravi Shankar popularised Hindustani music in the west, Khan and his sons are keeping the flag flying with fusion projects like these.

“Musicians of the world, we are like one family,” said Khan. “We use the same seven musical notes. That is the magic of music. This musical relationship is much deeper than blood relationship.”

Walsh and Khan first met in Mumbai at the Taj Mahal Palace hotel in 2017. The American had bought a sarod, and invited the Ustad and his sons for a jamming session. Khan took the lead and played some tunes. Walsh absorbed them and improvised with his guitar, and a non-verbal dialogue was set in motion. 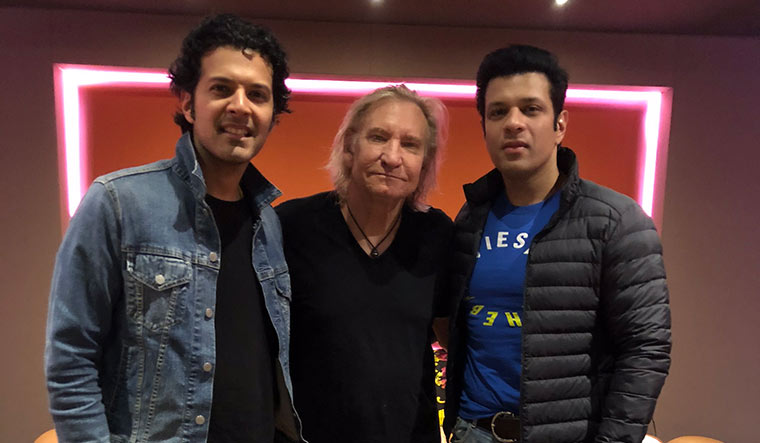 Walsh with Ayaan and Amaan

“That impromptu jam session went on for hours,” said Amaan. “[Walsh’s] humility is unreal. You just learn from this legend how it is done! Through [Prayers], the aim is to preserve the essence of both Indian and western traditions so they can flow into each other without artistic compromise.”

Preserving the Indian tradition is a strong mission of the Khan family. Ayaan remarks that Hindustani music is not instant-coffee culture as it takes long years of practice. “There is immense talent out there and the younger generation is very blessed to have so much readily available content online which gives access to years of research by legends,” he said.

Few communities have been spared by the onslaught of the deadly virus, and Khan feels for the creative minds that have suffered because of this. Several months ago, he told the media that he was saddened by the government’s apathy toward suffering musicians. Considering them for pension, he said, would have helped them tide over the crisis.

“So many musicians have died; the creative world has suffered a lot,” said Khan. “But we are still doing our practices and praying through our music that this pandemic will end soon. We can do virtual concerts, but we are hoping to perform once again in Carnegie Hall or Kennedy Centre or the Royal Albert Hall. We are looking forward to it.”

The soothing, dreamy compositions in Prayers are a balm for a world that is hurting. As for legendary crossovers such as this, Walsh has indicated there is more to come. “I’ve just scratched the surface with Indian music and that is a big part of my wanting and needing to return [to India],” he said. “I’m compelled to return and continue to uncover all of its magic.” Until such time, Walsh sends his prayers and love to a people he has formed a close bond with.