Science Gallery's new exhibition is a bold, inventive map of a contagion

A Cluster of 17 Cases by Blast Theory.

The background score almost sounds like a striker slamming the sides of a carrom board at short intervals. To this lonesome, foreboding sound, viewers enter the Metropole Hotel in Hong Kong on the night of February 21, 2003. Just like the “choose your own adventure” format of Black Mirror: Bandersnatch, the viewer can go anywhere at his own peril. At the outset, the screen flashes a warning sign: “On the 9th floor, some people will leave unscathed, some people will die.” A suave voice then leads the audience through “the corridor of uncertainty” into the bare, sterile rooms of 17 individuals who subsequently check out of the hotel, taking the SARS virus with them to the Philippines, Singapore, Canada, Vietnam, Australia and the US.

The virtual interactive artwork ‘A Cluster of 17 Cases’—showing at the Science Gallery Bengaluru in its online exhibition, Contagion—was created by the first-ever artists-in-residence at the World Health Organization in Geneva in 2018. Blast Theory, the UK-based artists’ group, reconstruct the mysterious events of that fateful day after gaining insights from key WHO strategic health operations staff and epidemiologists. They conducted tests to trace airflow and movement of people between rooms. The result was an installation which has been updated into the form of a video art for the first time for Contagion, which explores the phenomenon of transmission, not just of diseases but also of emotions, behaviours and information.

But more significantly, Contagion represents a rare, future-forward collusion of evidence-based science and art. It is not often that you see leading medical professionals, scientists and historians coming together to support artistic expressions of public health calamities right in the middle of a crisis. The 45-day exhibition has been organised in partnership with the Robert Koch Institute, a German federal government agency; the Indian National Science Academy; and DBT/Wellcome Trust India Alliance, part of the Wellcome Foundation in the UK. Contagion’s advisory panel includes scholars like historian of medicine Sanjoy Bhattacharya, virologist Shahid Jameel and physicist-biologist Mukund Thattai, who has been deeply involved in art-science collaborations, working with conceptual artists and theatre practitioners.

From bacterial stories to staring at ants in antibiotics, from close-view footage of HIV-infected blood to a showcase of computer malware from the 1990s, Contagion taps into the idea of “infectiousness” at a crucial turning point in global health history, which will be marked by major technological shifts and medical breakthroughs.

For Thattai, art and scientific exploration exist in separate worlds. “Art is parallel [to scientific exploration]. The role of art here is to make clear the existence of certain questions, not necessarily to provide scientific answers. It is to make people appreciate that these questions are important and worth spending societal capital on in terms of time and money. And, it is to highlight the weaknesses in our present or previous efforts to tackle big problems,” says Thattai, who once helped a team of students at the Srishti School of Art, Design and Technology at Bengaluru bag an award at the famed International Genetically Engineered Machines (iGEM) competition at the Massachusetts Institute of Technology (MIT). “One of the things artists can do is conceptualise and imagine hypothetical futures where scientific tools are used for good or evil. This sort of imaginative exploration then forces scientists like me to confront the consequences of some of the work we do.”

In a large drawing of the Bombay Plague, Mumbai-based artist Ranjit Kandalgaonkar combines photographs from the Wellcome Collection and cartoons from HindiPunch, the Indian version of Punch, the British weekly magazine of humour and satire started in 1843. “By 1896, when the plague hit the city of Bombay, HindiPunch entirely dedicated its daily cartoons to the plague and the unfolding events,” says Kandalgaonkar. “HindiPunch was an interesting alternate archive which showcased speculative settings within households, voicing people’s fears, rationale, state of mind, dire situation and their own understanding of what the plague actually is.” 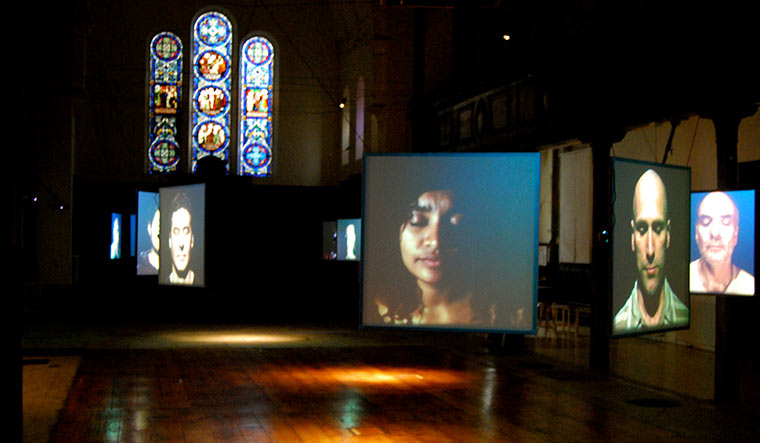 The Chameleon Project by Tina Gonsalves.

Through his work, Kandalgaonkar draws parallels between the current pandemic and the Bombay Plague, including the government invoking the Epidemics Act of 1897 to tackle Covid-19, first implemented when the plague of 1896 consumed Bombay.

In the video installation, ‘Fluid Dialogues’, artists work with microscopic footage of the blood of people infected with HIV. “One thing that is very important to mention about working with HIV+ blood is that a person who has HIV and is on effective treatment cannot transmit the disease, so there is no real risk of infection, but of course the idea is still triggering fear, which is what we want to address with this piece,” says Basse Stittgen, one of the collaborators. The idea of laughter being “contagious” gets a delightful treatment in ‘When the World was a Laugh’, as artist Anais Tondeur puts out an international call to submit laughs and records its vibrations.

Ultimately, it is about going beyond the tepid exhibition of dinosaurs, rockets and the Milky Way to “catch ‘em young” in crumbling science centres. The Science Gallery, which is less than two years old, is trying to offer an updated experience of the physical and natural sciences which must now necessarily include advances in technology and culture.

“Knowledge about the unfolding situation is being revised rapidly for more than 12 months. After all, how do ideas, behaviours and diseases spread and to what consequences?” asks Jahnavi Phalkey, historian of science and technology and founding director of the SGB, located close to IISc, which is also its lead academic partner. She is helping build a public lab complex to encourage more in-house innovators who can work at the intersection of science, art and culture. She sent out an open call for Contagion a year ago. “We open doors to research, to creative responses, and hands-on activities that will help us all formulate relevant questions as we make our way through this demanding moment,” says Phalkey.

In times of despair, art reinforces that we are not alone

The idea of engaging with art in times of conflict often becomes escapist. So we can briefly look away from calamitous events around us. Overt depiction of viruses and the idea of transmission can be triggering. How do we deal with representations of outbreaks and metaphors of death in the middle of a pandemic? What would you like to highlight about the exhibition Contagion that will help us better understand the current pandemic?

It is not escapist but protects us from getting overwhelmed. Each one of us is overwhelmed not just due to a completely changed way of living with ‘social distancing’, but also the suffering and loss of friends and family. In an evolutionary sense, we are geared up to deal with it through ‘collapse of compassion’. When the number of victims increases, the quantum of sympathy actually decreases, and so does the willingness to help. People tune down their empathy. This appears to be a survival trait programmed in our brains to protect us from being overwhelmed.

When we create art, write, sing or indulge in any creative activity, we get into a ‘flow state’, which the Hungarian-American psychologist Mihaly Csikszentmihalyi describes as a period of optimal attention in which we are completely focused on the task at hand. Art or any form of self-expression is another way to let off steam and protect us from being overwhelmed. No wonder then, that art is routinely used as a therapy for post-traumatic disorder syndrome. In times of despair, art also allows us to understand our own context, and reinforce that we are not alone. It also chronicles the times and allows future generations to understand past suffering a little better. Whether it is Gabriel Garcia Marques’s Love in the Time of Cholera, a fictional account set at the turn of the 19th c, RW Harrison’s macabre drawings of the 1918 flu or Bansky’s ‘Game Changer’, which raised $23 million for UK health charities during Covid-19, art has documented disease, death and relationships. Examples from India include Shitala Mata, the Goddess of Smallpox, and more recent expressions of Ganesha as the destroyer of pesky pandemics. The defining feature of Contagion is that while it is deeply rooted in science, it uses various forms of expression to try to understand and define the germ, the disease it causes and the effects it is having on society.

How easy or difficult is it to synergise science-based evidence and art? Can you tell us from your personal encounters where you have been blown away by their juxtaposition?

It is not easy. It requires someone who understands the rigours of scientific enquiry and is creative enough to express it. These two qualities are rarely found in one individual. Those who have it are very special. My first experience of this was when a Polish artist spent a few days in my lab almost 20 years ago. How she could take microscopic images of cells that we cultured routinely into a work of art was truly fascinating. While heading the DBT/Wellcome Trust India Alliance, we funded an artist-in-residence programme with Khoj in New Delhi to bring the scientists we funded together with artists. The results were interesting. This one way of popularising science and also getting across the rigours and precision of science and the scientific method to wider audiences. It is needed now more than ever.

After having lived with a raging virus for more than a year now, has the time come to treat the discipline of epidemiology as liberal art? How can it be made more accessible in our day-to-day life?

Epidemiology is defined as the “diagnostic discipline of public health”. It studies the patterns of disease occurrence in human populations and the factors that influence these patterns. It depends on data to analyse the who, when and where of disease. Who is getting the disease? When and where is the disease occurring. Epidemiologists try to figure out what is going on and where it might be heading; they try to control and prevent the spread of disease. But since epidemiology deals with disease, which is often spread by how people behave, it cannot be seen just as a science without an understanding of human behaviour, societies and social networks. With the penetration of social media at this time, everyone can contribute to the work of an epidemiologist. And that is why a broad understanding of data is useful. This is best done through integrative education at school and college.

According to you, what ails science museums and allied galleries in India? What can be done to make them more dynamic, engaging, and popular?

Science is best understood by doing. And therefore, science museums should strive to explain scientific concepts and methods through activities instead of just models and written materials.