Ruskin Bond is at his most contemplative in his new book 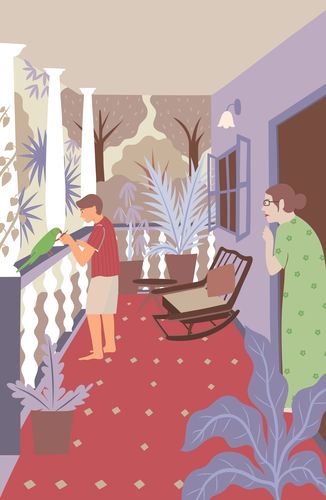 Someone once asked me where I get the ideas for my stories,” Ruskin Bond writes in his latest book, All-Time Favourites For Children. “Well, if you like people and find them interesting, you won’t run out of stories. If you like birds and animals and flowers and trees and the world around you, you won’t run out of ideas.” It must be a formula that works, because after 500 short stories and 40 books for children, Bond’s pen is still his magic wand.

His world is as vibrant as ever, full of bears in dressing gowns, men who fight ostriches, camping expeditions and ghosts inside trunks. Some of the stories have been published previously. Like always, Bond finds the extraordinary in the most ordinary things and imbues them with a sense of wonder.

Perhaps because the collection was released on his 87th birthday, there appears to be a pensive note in some of the vignettes. Like in his story, To the End of the Rainbow. “They say there’s a pot of gold at the end of the rainbow, and you might just find it if you try hard enough,” he writes about seeing a rainbow between two hilltops named Pepper Pot and Top Tibba. “But I was after no pot of gold. I wanted all the colours of the rainbow—the red, the orange, the yellow, the green, the blue, the indigo, the violet—and I wanted to put them in my poems and stories, so that when I come to the end of my days, all the colours of life would be there at the tip of my pen….”

Sometimes, it feels like he is not creating stories, he is conjuring the deepest magic of the soul through his words. We give you a smattering of that magic in his story, The Parrot Who Wouldn’t Talk:

The parrot who wouldn’t talk

‘YOU’RE NO BEAUTY. Can’t talk. Can’t sing. Can’t dance!’ With these words, Aunt Ruby would taunt the unfortunate parakeet who glared morosely at everyone from his ornamental cage at one end of the long veranda of Granny’s bungalow in north India.

In those distant days, almost everyone—Indian or European—kept a pet parrot or parakeet, or ‘lovebird’ as some of the smaller ones were called. Sometimes these birds became great talkers, or rather mimics, and would learn to recite entire mantras (religious chants) or admonitions to the children of the house, such as ‘Padho, beta, padho!’ (‘Study, child, study!’) or, for the benefit of boys like me—‘Don’t be greedy, don’t be greedy’.

These expressions were, of course, picked up by the parrot over a period of time, after many repetitions by whichever member of the household had taken on the task of teaching the bird to talk.

But our parrot refused to talk.

He’d been bought by Aunt Ruby from a bird catcher who’d visited all the houses on our road, selling caged birds ranging from colourful budgerigars to chirpy little munias and even common sparrows that had been dabbed with paint and passed off as some exotic species. Neither Granny nor Grandfather were keen on keeping caged birds as pets, but Aunt Ruby threatened to throw a tantrum if she did not get her way—and Aunt Ruby’s tantrums were dreadful to behold!

Anyway, she insisted on keeping the parrot and teaching it to talk. But the bird took an instant dislike to my aunt and resisted all her blandishments.

‘Kiss, kiss!’ Aunt Ruby would coo, putting her face close to the barge of the cage. But the parrot would back away, its beady little eyes getting even smaller with anger at the prospect of being kissed by Aunt Ruby. On one occasion, it lunged forward without warning and knocked my aunt’s spectacles off her nose.

After that, Aunt Ruby gave up her endearments and became quite hostile towards the poor bird, making faces at it and calling out, ‘Can’t talk, can’t sing, can’t dance!’ and other nasty comments.

It fell upon me, then ten years old, to feed the parrot, and it seemed quite happy to receive green chillies and ripe tomatoes from my hands, these delicacies being supplemented by slices of mango, for it was then the mango season. It also gave me an opportunity to consume a couple of mangoes while feeding the parrot.

One afternoon, while everyone was indoors enjoying a siesta, I gave the parrot his lunch and then deliberately left the cage door open. Seconds later, the bird was winging its way to the freedom of the mango orchard.

At the same time, Grandfather came to the veranda and remarked, ‘I see your aunt’s parrot has escaped!’

‘The door was quite loose,’ I said with a shrug. ‘Well, I don’t suppose we’ll see it again.’

Aunt Ruby was upset at first and threatened to buy another bird. We put her off by promising to buy her a bowl of goldfish.

‘But goldfish don’t talk!’ she protested.

‘Well, neither did your bird,’ said Grandfather. ‘So, we’ll get you a gramophone. You can listen to Clara Cluck all day. They say she sings like a nightingale.’

I thought we’d never see the parrot again, but it probably missed its green chillies, because a few days later I found the bird sitting on the veranda railing, looking expectantly at me with its head cocked to one side. Unselfishly, I gave the parrot half of my mango.

While the bird was enjoying the mango, Aunt Ruby emerged from her room and, with a cry of surprise, called out, ‘Look, my parrot’s come back! He must have missed me!’

With a loud squawk, the parrot flew out of her reach and, perching on the nearest rose bush, glared at Aunt Ruby and shrieked at her in my aunt’s familiar tones: ‘You’re no beauty! Can’t talk, can’t sing, can’t dance!’

Aunt Ruby went ruby-red and dashed indoors. But that wasn’t the end of the affair. The parrot became a frequent visitor to the garden and veranda and whenever it saw Aunt Ruby it would call out, ‘You’re no beauty, you’re no beauty! Can’t sing, can’t dance!’

The parrot had learnt to talk, after all. 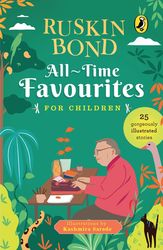