I have just started out 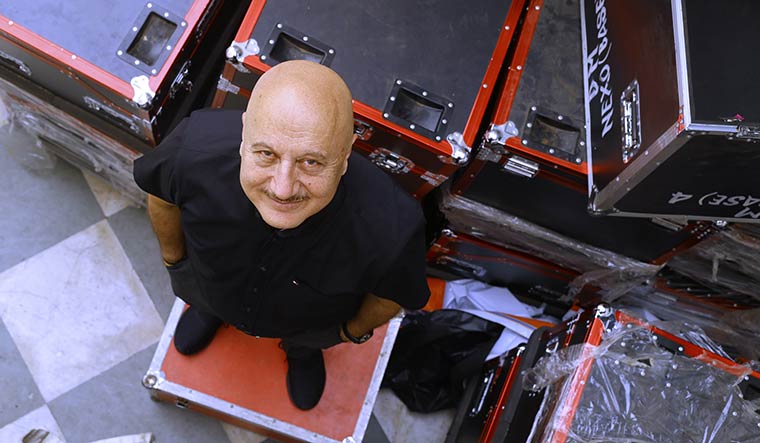 On May 6, Anupam Kher tweeted that the New York City International Film Festival had named him best actor for his performance in Happy Birthday. The soon-to-be-released film, directed by Prasad Kadam, was also adjudged the best short film.

The award was a much-needed fillip for the actor, who has been a little gloomy since his return to India from New York two months ago after his wife, actor Kirron Kher, was diagnosed with blood cancer. Covid-19, too, had wreaked havoc in his life, with his mother, brother and a few other family members having tested positive last year. As a way of overcoming his fear, he took to writing his third self-help book, Your Best Day is Today, last year. “The urge to write had never been [more] compelling,” he says.

After having acted in over 500 films in a span of 40 years, Kher feels he has only “just started out”. At an age when most people would be hanging up their boots, Kher—who has also tried his hand at poetry, teaching at his acting school and producing and directing films—kicked off his innings in Hollywood. He received critical acclaim for his performance in the Anthony Maras-directorial, Hotel Mumbai, that was based on the 26/11 attacks, and for his role as Dr Kapoor in the American medical drama, New Amsterdam. After all, who wants to retire as just another great Indian Bollywood legend? “I want to do so much more. There is lots to desire, to explore and to enjoy,” he says with youthful exuberance.

He is cheerful, frequently doling out motivational advice during our interaction, deftly stepping away from anything political, because he wants to focus on “brighter, lighter and happier things”. Excerpts from an interview:

Q\ How did you end up saying yes to Happy Birthday, since you have not done too many short films?

A\ About two months ago, they sent me the script and I liked it immediately. I agree that I have not really worked a lot in the short film genre, but this seemed instinctively exciting. I believe that a short film has to have a twist, and the possibility of sending the message across and making an impact within a few minutes. This film does just that in exactly 16 minutes. Also, it so happens that I am a great admirer of short stories written by Anton Chekhov, Roald Dahl, Munshi Premchand and Maxim Gorky, and so when I got on a Zoom call with the writer and director, I suggested tweaking the film based on my own learnings and experience. The film was shot in a day, through 15 hours from 9am to 1am. Interestingly, I have actually done very little acting in it. Yet, you feel the character because it is so internalised. And I think that’s what worked in my favour. It was a demonstration of my faith in myself, as a person and as an artiste.

Q\ Did you expect the award?

A\Not at all. In fact, the producer and director had not even informed me that they had applied to the festival. It was only when we got nominated in four categories that Prasad sent me a message. Then, of course, it was all about the nervous wait leading up to the awards. A night before, at 2:30am, he informed me that we had won two awards, and I was absolutely thrilled.

Q\ After mostly doing full-length films, how challenging was it to pull off a short film?

A\ Cinema, as a concept, is largely the medium of a writer and director. But when it is a long film, an actor, too, gets an opportunity to display his skills. With Happy Birthday, what was most challenging was that the film was shot in real time. It starts at 12pm and ends at 8pm, and the story takes form and shape in these eight hours of real time footage. And that is why the actor’s job becomes more difficult. Also, another aspect was that the film is not shot chronologically, [despite it being filmed completely in one house].

Q\ At 66, you continue to enthral audiences.

A\ I have only just started. In fact, after all these years, it is only now that I have really begun to understand the nuances of acting. At my age, I still feel like I am 30. My life has had a very interesting graph. When I was 28, I played a 66-year-old in one of my most popular and well received films, Saaransh (1984). So, at 28, I knew what it was like to be 66, and now at 66, I know what it feels like to be 28. When I look back at some of the films I have done, I think I have grown as an artiste.

Q\ How different was it to work in Hollywood?

A\ Talent-wise we are equal. But the professionalism and the pre-production preparation over there is phenomenally well-researched and well-done. I made some very good friendships there, the most special being with Robert De Niro.