25 years of living with Bridget Jones 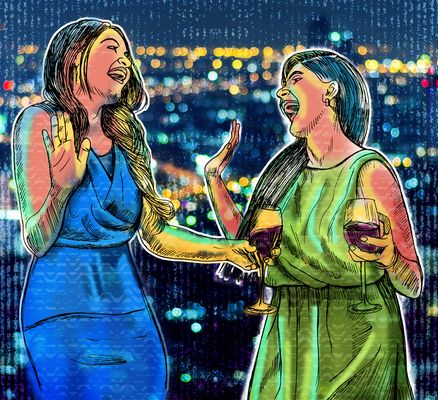 Disclaimer: All characters and events depicted in this piece are entirely non-fictitious. Any resemblance to an actual event or person is deliberate. The person is called Bridget Jones and to the Universal Sisterhood of Bridget fans, she is as real as your annoying mother, who is constantly pushing you into the next singles party in order to snag a rich/ handsome/ intelligent/ educated husband with six-pack abs and a six-figure salary. All of the above requirements are mandatory if you are in your early 20s, some of them if in your mid-20s, and none when in your 30s. Then, your best bet is to grab any specimen of humanity belonging to the ‘male’ category and drag him to the altar.

If you have entered your 30s ring-less and husband-less, Bridget is real because, in many ways, she is you. The woman who has gone on a date and pretended to have read a book after having scanned only the back jacket. The woman whose New Year resolution is to reduce circumference of thighs by three inches using an anti-cellulite diet. The woman who schedules countless Spartan health and beauty regimens poised to begin in the beautifully promising land of ‘tomorrow’.

Twenty-five years ago, as a girl growing up in a small-town in Kerala, reading about the Cosmopolitan-swilling, cigarette-smoking Bridget – whose world comprised of such alien creatures as ‘megalomaniacs’, ‘emotional ‘f***wits’, and ‘Smug Marrieds’ – was nothing short of a revelation. From the chaste terrain of Tinkle Digests and Nancy Drew mysteries, I was baptised into the wondrously naughty-and-haughty world of Bridget. Let’s face it; one heel of Bridget’s faux Manolo Blahnik was enough to trample underfoot a dozen Suppandis and Shikari Shambus.

It was only as I grew older that I began feeling the emotional undertow beneath Bridget’s obvious humour. When I first read her reply to an acquaintance who asks her why she is not married yet (“Underneath my clothes, my whole body is covered in scales”), I laughed out loud. I must have been 11 or 12 then. In my twenties, I started pondering that answer—and what exactly its sardonic sarcasm hid. In my thirties, I felt like cheering her with a ‘You go, girl!’ when she said that.

As I grew up, Bridget’s world started merging with mine. I could find analogues with every stereotype described in the book. The aunty who tsk-tsks every time she meets you and goes: “You can’t put it off forever you know. Tick tock tick tock (presumably referring to marriage and mommydom).” The next-door neighbour whose form of greeting is: “How’s your love life anyway?” (That question should be made a criminal offence in the Indian Constitution, punishable by seven years of rigorous imprisonment.)

Twenty-five years later, many would say that, in a post #MeToo world, when we have neatly labelled Bridget’s experiences into categories like ‘body-shaming’ and ‘normalised misogyny’, Bridget herself has no longer any relevance. In an age when women have weaponised their experiences, you probably would not tolerate the casual chauvinism of Bridget’s world. As Helen Fielding, the author of the book, herself said: “You couldn’t write that now. The level of sexism Bridget was dealing with…. I mean in the end, she turned round and stuck it to them, but it was just part and parcel of her life. It was quite shocking for me to see how things have changed.”

But despite all the naysayers, Bridget has emerged triumphant into the 21st century, armed with a dry Chardonnay and a drier sense of humour. Part of the reason may be that, underneath all the talk of feminism and empowerment, don’t we all have a little bit of her in us? In our desire to be loved and to build meaningful relationships? In the insecurities, mistakes and miscalculations that come with the terrain of being a woman? In the blind dates we have suffered through with sucked-in tummies? In the countless failed resolutions to “eat more fibre”? As Bridget would say, of course we need to stand together to call out the “Mr Titsperverts” of the world, but really, is there any harm if we want to do it two kilos lighter?