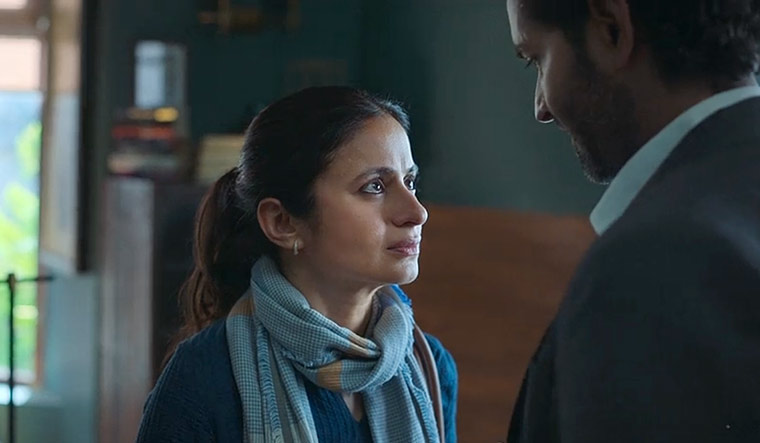 A scene from Out of Love, Season 2

In the lush hills of Coonoor live the family of Dr Meera Kapoor—her businessman husband, Akarsh, their teenaged son, Abhishek, and his cancer-survivor grandmother. While everything appears to be picture-perfect with this liberal, well-off and modern Indian family, the story behind closed doors is different. Things are not what they seem with Meera and her husband. A medley of sex, infidelity, betrayal, heartbreak, jealousy and revenge all come together in the dark and deeply absorbing drama.

Season two of the series, recently released on Disney+Hotstar, is a revenge drama that focuses on the psychological warfare between two people who know each other and their weaknesses really well. Three years after his cheating scandal, Akarsh, now Meera's ex-husband, is back in town to reclaim his life and mend his relationship with his son, while Meera struggles to keep her cool. Akarsh is now remarried, with a baby daughter.

In this love-dhoka-revenge show, the two aspects that particularly stand out are its inherent drama and the striking performances by its leads—Purab Kohli and Rasika Dugal—as Akarsh and Meera. Even as the first season could be termed predictable, with its sympathies obviously lying with Meera, the second season is more nuanced, and the audience may take either side—with Akarsh, who thinks he has been wronged, or with Meera, who despairs in her husband's duplicity.

In that sense, the show keeps you on your toes. “In this season, the script has explored, to a large extent, the reckless side of Meera, and it is going to be a tough task to find empathy for a character who is making erratic decisions,” Dugal told THE WEEK.

While season one accorded her lavish screen time as the protagonist who is present in almost every frame, the new season shifts focus to the others. Was this a conscious decision to break the monotony? “I would like to believe that a good performance can never be monotonous,” says Dugal. “If the audience feels bored with too much of Rasika, then I would have failed as an actor.”

Kohli says that he feels the writing of season two is so great it gives every bit the feel of a thriller drama. “In season one, it was harder to play Akarsh because he had only one layer,” says Purab. “It was hard to empathise with a character like him. In the second season, it was a lot easier because it came with the knowledge of what happened to him by the end of the first season.... In the first season, he crumbled while in the second, he rebuilds himself and bounces back.”

Despite a change of directors in season two, with Tigmanshu Dhulia and Ajaz Khan being replaced by Oni Sen, and with only the first two episodes released so far, (the next three are slated to release weekly), Out of Love 2 is an immensely watchable drama that can be enjoyed irrespective of whether you have watched its prequel or not.