Mahadev Desai, Mahatma Gandhi’s close associate and confidante, once wrote a book called The Epic of Travancore. The kingdom of Travancore in southern India—which was a princely state during the British rule that later became part of the state of Kerala—is known to have promulgated several progressive reforms under the last Maharaja of Travancore, Sree Padmanabha Dasa Sree Chithira Thirunal Rama Varma (1912-1991), more popularly known as Sree Chithira Thirunal. One of the most notable ones was the temple entry proclamation, passed on November 12, 1936. The law facilitated the entry of all Hindus, irrespective of caste, to over 1,500 temples managed by the Travancore state. Sree Chithira Thirunal, hence, became the first Indian ruler to discard untouchability in religious affairs.

Desai wrote in his book, “...the unique character of this Charter has made the Maharajah’s name universally acclaimed as ranking with King Asoka and King Akbar.” Princess Aswathi Thirunal Gouri Lakshmi Bayi, the last maharaja’s niece, pens a resplendent account of her royal lineage in History Liberated: The Sree Chithra Saga. The book covers the legacy of her uncle and grandmother, Maharani Setu Parvathi Bayi, Sree Chithira Thirunal’s mother and the junior maharani of Travancore. It gives the reader a sweeping view of the historical canvas of Thruppappoor Swaroopam, the formal name of the Royal House of Travancore.

The author has deftly referenced crucial milestones in the history of the kingdom through the stories of the royal cousins, Maharanis Setu Lakshmi Bayi (who later became the queen regent) and Setu Parvathi Bayi. While the book is centred on the life and legend of Sree Chithira Thirunal, it does so while orbiting the lives of the adopted maharanis, products of the matrilineal system followed by the royal family.

But, perhaps, the most important character in the book is Sri Padmanabhaswamy Temple, the omniscient eye powering the narrative forward. Be it the royal birthdays, weddings, investiture, the Malayalam New Year, or the swearing-in of the first Maharaja of Travancore, the Ottakkal Mandapam, the sacred single-stone platform in the temple, has been witness to many a momentous occasion.

Several reports had opined that Sri Padmanabhaswamy Temple was the richest temple in the world, when, in 2015, reports of the discovery of a new treasure valued at over $1 trillion surfaced. The royal family has always maintained that any and all treasures in the temple belong to the deity. In 2011, the family had lost custodial rights over the temple, following a High Court ruling. Last July, the Supreme Court upheld the family’s traditional rights over the temple.

The most piquant passages of History Liberated are in the first part, where the author minutely shares the formative years of the maharanis, described by British traveller Henry Bruce as “two of the daintiest little figures imaginable... both of them little beauties”. The sepia-tinted family pictures of their pallikettu (royal weddings); the junior rani’s devotion to classical south Indian music, to make up for the lack of marital bliss; or her presidential address on women’s education at the 1928 All India Women’s Social Conference in Calcutta—all add up to a charming portrait of a life lived in all its fullness. The family memoir sheds a much empathetic light on one of India’s preeminent royal families and its principal actors in its twilight years. 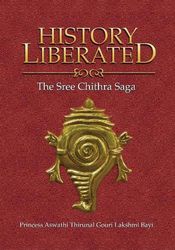