There is a simple poem called Loving, Leaving in Jerry Pinto’s new poetry collection, I Want a Poem. Here, the poet talks about voluntarily vacating a “hearthome” after he falls out of love—after a single quip cuts him to the quick. How the exit has made him “clear-eyed” again, even though he will miss the “familiar red percussion” of his lover’s heart-red blood.

Just when you wonder if you ended a conversation about heartbreak in a lucid dream, pat comes What Remains as the challenger next in line.

“What remains is the cool light on end-stopped waves;/ A contrapuntal: a mischievous delight in your eyes;/ A velvet undercoat to your voice,/A shade of green, studied, calculated,” he writes.

And once again you are enveloped by a bewildered emotional juddering crafted in Pinto’s trademark gentle fluidity—a style we have fondly come to recognise in his novels, short stories and translations. I Want a Poem is Pinto’s second poetry collection after a gap of 18 years since his debut, Asylum, which marked him out as a distinctive literary voice in the firmament of Indian English poetry. One of the finest English writers in India today, his new poetry collection was much awaited and is released into a world which is learning to hold on to the wings of poesy like a rope in a hurricane. There is something for every kind of poetry reader here, from the well versed to the curious. I Want a Poem responds to this aching need for comfort and reassurance, now more than ever, with poems as diverse in their style and essence as Loving, Leaving and What Remains.

The roaming range of Pinto’s many musings is vast and varied; the earliest piece in the book dates back to nearly 20 years ago while some were written only last year. They vary from the meditative and snarky to the wistful and wise. There is the Memory Box right at the start whose contents the poet wants to unlock, set it afloat on a leaf and “camphor-blaze” them into sunset. The eponymous I Want a Poem has a sprightly momentum as the writer invokes a dazzling array of images and metaphors in mock frustration like a petulant child. “I want a poem/ like a chorus of angels,/ a chamber of horrors,/a block buster film,/ a sexcapade with candlewax,/ an anaconda adventure,/a ride in a Batmobile,/ a contessa in a fountain,” he writes.

A number of pieces are, in fact, what Pinto wants the world to know about his poetry, and they are charming in their insistence. “My poems are written for people like you./ My poems take short cuts; my poems ride slipstreams./ My poems take the path of least resistance,” he writes. And in a delightful piece towards the end, he advocates the practice of making poetry in bed, “In shorts and jabba./With chocolate wrappers to attract/ Black ant ideas,/ Slight, frantic ideas”.

Pinto is among the best readers of poetry in India and is popular on social media. He also runs a large WhatsApp group with daily readings for poetry lovers. Playful, fierce and often unafraid to use rhymes, he effortlessly attracts an eclectic bunch of devotees. Many poems in the new collection ruminate on the idea of home, like House Repairs and Drawing Home. And Pinto is a writer one truly comes home to. His poems reaffirm what Coleridge once described a poem as—“the best words in the best order”. 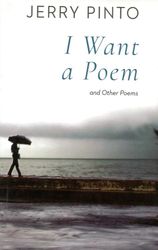 I Want a Poem and other Poems