I still consider myself to be an 'intern' in Bollywood, says Sanya Malhotra

Six years after her debut, Sanya Malhotra is no longer an outsider in Bollywood 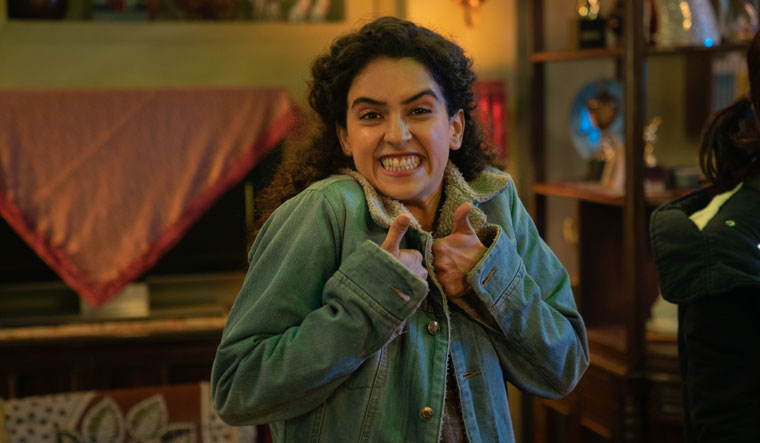 How does it feel to mourn the loss of someone whom you did not love? Sanya Malhotra could tell you. Barely five months into their marriage, Sandhya—her character in Pagglait, her latest release—loses her husband, Astik. Even as the entire Giri clan descends on the sprawling, ancient Lucknowi home for 13 days of mourning, his widow is unable to shed a tear. Bored of the rituals and restrictions, she lies in bed scrolling through Facebook and craving junk food. Her lack of feeling for a partner whom she hardly knew comes across as brutally honest, fresh and relatable. Malhotra captures the humdrum existence of her character through a wealth of varied expressions, which is what fans could identify with in Pagglait, directed by Umesh Bist.

It was not easy being Sandhya, says Malhotra. After all, how do you really portray the grit and conviction of a character who must turn her life’s biggest tragedy into her salvation? “For 45 days, I was living Sandhya’s life and thinking like her, so much so that I almost forgot the real me,” says the actor in an interview with THE WEEK. Added to that was the pressure of carrying the film on her shoulders as the lead protagonist, although supported by an ensemble of formidable actors like Sayani Gupta and Ashutosh Rana.

But Malhotra evidently has the ability to sparkle when required. Her short career spanning six years is testament to her versatility as an actor, starting with Dangal (2016), in which she responded admirably to the physical and emotional demands of her character as ace wrestler Babita Phogat. Sanya’s entry into Bollywood came out of her “exceptional love for dancing” and a fortunate stroke of serendipity. “For me, dance is a form of expression. It really helps me stay the course,” she says. She initially came to Mumbai from Delhi to audition for a popular reality show, Dance India Dance, but that did not work out. However, as the adage goes, when a door closes, a window always opens. The actor decided to try her luck with dance choreography and the rest, as they say, turned out to be her future.

Dangal went on to become the highest-grossing film of the year, collecting over Rs2,000 crore at the box office and giving Malhotra the foothold she needed as an outsider in a nepotistic industry.

“I have learnt my art and skill on the job. In fact, in the film industry, I still consider myself to be an intern,” the vivacious actor says with a laugh. “I feel blessed to have come this far. I have never learnt acting. I only know that one has got to put oneself completely in the shoes of the character, both emotionally and physically, and that is exactly what helps me. I do not have any particular method or formula for approaching a character.” Once off the camera, she tries to divorce herself from the character so as to keep the line between reel and real intact. At times, it is easy, but most times it is not. “It is easy with characters with whom I cannot relate at all. Chhutki in (Vishal Bharadwaj’s) Patakha (2018) was one such. I don’t talk like that and am definitely not that spiteful,” she says.

While Patakha gave Malhotra the space to explore the depth of her own dynamism through the use of dialect and free-flowing gaalis (cuss words), the Ayushmann Khurrana-starrer Badhaai Ho (2018) allowed her to display the delicate balance between spunk and restraint. She then went on to play a shy student in Photograph (2019) and an uncertain girlfriend in Ludo (2020). Her next project is Love Hostel with Vikrant Massey and Bobby Deol. Only two things remain constant in all her performances—her elfish smile and a lack of artifice. How does she manage not to get typecast as an actor, a quicksand into which many Bollywood stars have sunk? “Instinct,” she replies. “I select my scripts intuitively. And thankfully, that has worked well for me so far.”