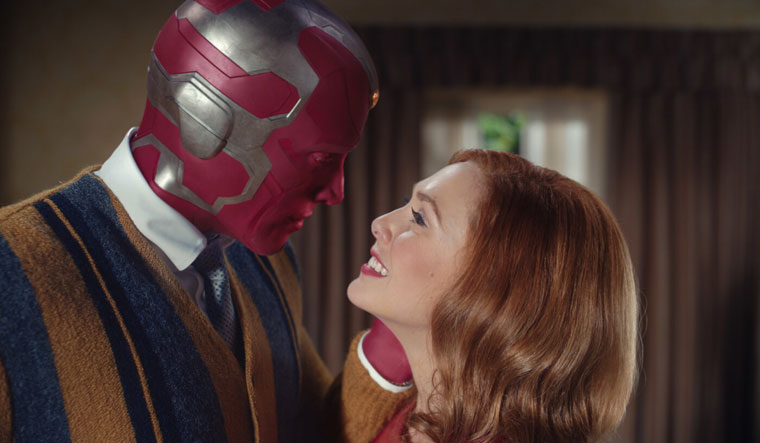 Marvel Studios does what it wants and millions worldwide lap it up; that is clear from its record since Phase One of the Marvel Cinematic Universe (MCU) began in 2008. Thankfully, with its latest offering WandaVision, the studio has experimented a little. The nine-episode miniseries, which had its finale on March 5, explores grief and identity metaphysics, while disguised as a superhero story.

The very first shot, in monochrome and a 4:3 aspect ratio, makes it clear that this is different from anything else in the MCU. Sitcom tropes supply humour and just as you start getting used to the weirdness of it, the show gives you a peek into the dark undertone. And not much more, at least not immediately.

It continues in the same vein for some time and would have been boring if not for the commitment to the format—the show jumps through decades with each episode and the first seven episodes recreate the feel of different classic US sitcoms. Its biggest strength is making viewers feel like they, too, are trapped inside this alternate reality.

Soon, the “real world” catches up. But, apart from one brilliant sequence at the start of episode four, it is a disappointment. Filled with MCU clichés, it is only salvaged by some good performances. Thankfully, the aspect ratio changes to widescreen when the show jumps out of the alternate reality—a warning that formulaic writing follows.

Elizabeth Olsen is brilliant. Her ability to replicate performances from the old shows deserves special mention. She is already being considered a contender for an Emmy. And she looks set to play a major part in the MCU in the near future.

Through WandaVision, Marvel has managed to salvage the character played by Olsen—Wanda Maximoff aka the Scarlet Witch. One of the most powerful characters in the MCU, it felt almost as if she was written out of the latter parts of the Infinity Saga (Phase One to Phase Three) which ended in 2019. If not, the more popular, evidently less powerful, heroes may not have got the closure their character arcs warranted.

Interestingly, WandaVision—the start of the MCU’s Phase Four—invokes, and explains, the ship of Theseus thought experiment. The MCU has had snippets of philosophy under the surface, like Captain America’s deontological ethics (emphasis on relationship between duty and morality of actions) and Thanos’s consequentialism (belief that actions should be judged on the basis of consequences). But, here philosophy got screen time amid an action-packed finale.

Hopefully, this reference to identity metaphysics and the acts of pure evil by the show’s grief-stricken heroine indicates that MCU characters will be more layered going forward.