Food for the fight 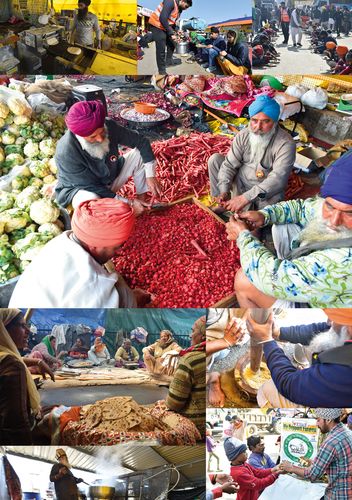 Parasdeep Singh has been stationed with his industrial-grade popcorn-maker at the Singhu border for over a month. He is a graduate who discontinued his master’s in history at Punjabi University, took a three-week training in physiotherapy and became a “patient caretaker” more than a year ago. The onset of the pandemic quelled his private physiotherapy gig. That is when he bought a popcorn machine to stay afloat. “Where are the jobs with my qualifications? I have no money to pursue further studies,” says Parasdeep, as he cups a handful of popcorn and offers it to a gaggle of children waiting with outstretched palms.

He wanted to set up langar at Singhu border when the farmers’ agitation started, but he did not have the means to organise one. So, with help from a few friends, he managed to procure a truckful of corn and towed his machine on a motorcycle and reached Singhu to support his brethren. Though he was supposed to leave last month, he got a call from the village sarpanch who asked him to continue with his sewa. “He [sarpanch] will take care of my daily expenses,” says Parasdeep. “Big corporations will acquire corn at the lowest price from the farmers, store it, then sell popcorn to us for Rs100. This protest is not just for the farmers; it is for everyone.”

Food has always played a pivotal role in revolutions. There is a reason why they are called “weapons of mass consumption”; food is everything with its markers and connotations—religious, cultural, consumerist, subsistence, personal, and identity-based markers. It was the self-immolation of a Tunisian fruit and vegetable vendor, Mohamed Bouazizi, which triggered the Arab Spring in 2011.

While one could partake of free hot dogs at the pro-democracy protests in Hong Kong, a shop owner was inspired enough to sell tear-gas-flavoured ice cream made of black peppercorns. While denouncing corporate culture during the Occupy Wall Street protest (in 2011), agitators were fed corporate food like free Ben & Jerry’s pints and McDonald’s burgers. Climate activism-centred Extinction Rebellion (XR) kitchens in London would cook conscious food like vegan chilli, vegetable couscous, “scrap salad”, Chelsea buns and flapjack in military-precise community kitchens behind Trafalgar Square. While his diet conformed to his political beliefs, Mahatma Gandhi undertook and encouraged fasts in India’s freedom movement. Abstaining from eating food, by itself, was also a major force of resistance.

Chapatis have always been associated with rebellion. Just before the 1857 mutiny against the rule of the British East India Company, a mysterious and ever-growing distribution of chapatis started in the villages of north India, carried surreptitiously by watchmen in their turbans. The British surmised that the “chapati mystery” had secret messages embedded within, while the Indians thought it was the handiwork of the Britishers themselves. Chapatis reached the state of Kerala during the Vaikom Satyagraha (1924-1925) against caste discrimination in erstwhile Travancore. It was introduced by a group of Sikh protesters who came from Punjab and set up a langar there. 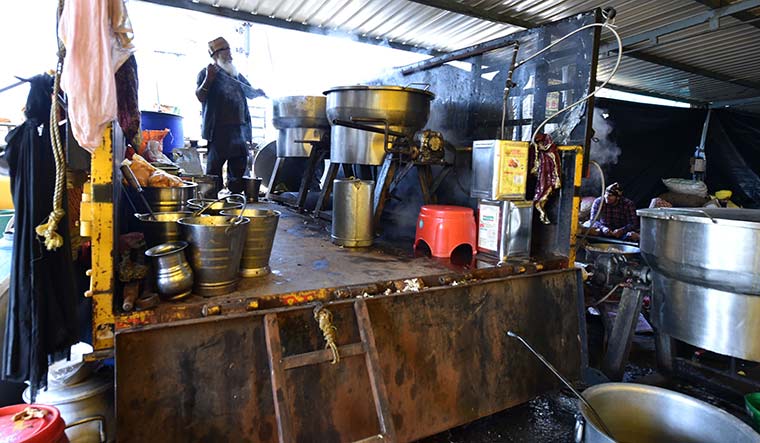 Revolution’s taste: A community kitchen operated from a truck at the Singhu border | Aayush Goel

The community kitchen at Shaheen Bagh fed the anti-Citizenship Amendment Act protestors all through the day. Packets of biriyani, mostly prepared in nearby Chandni Chowk, would be available to students, dadis and families camping there in biting cold, apart from fruits like chikku, figs and dates for those observing the Ramadan fast. One could not dismiss the variety from their “rebel kitchen”, from rajma rice to samosas.

The current agitation against “market-friendly” farm laws does not preclude market-friendly food like pizza and pasta at the protest site. And, why should it? When the crux of a movement is about ensuring the welfare of the keepers of India’s granary, food in all its diversity is bound to be the hallmark of it. 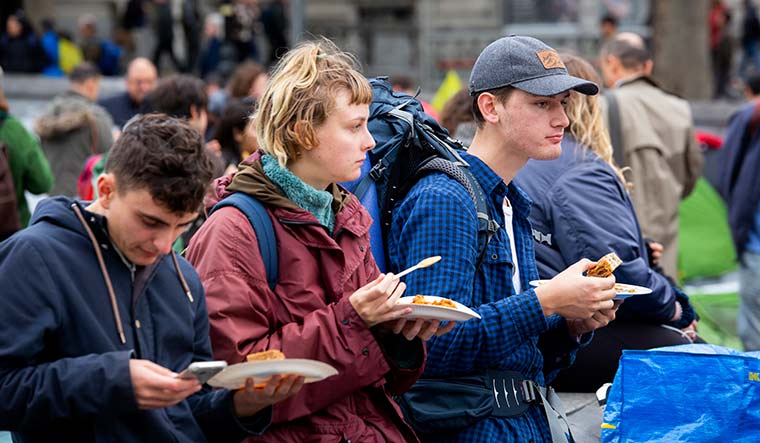 Near the makeshift laundry, complete with washing machines and iron-boxes, there is a langar where Ranjit Singh Rana from Sultanpur sits, next to a pile of cauliflowers. He is unable to fathom why a “Pizza langar” at a protest site should raise hackles. “We have served excellent langar during the Nepal earthquake and even the Bihar floods. We have served a langar in Syria. Nobody had any problems then?” says Ranjit. “Now when we are fighting for our rights, questions are being raised about the food being served here.” He recounts the religious origins of the system of community kitchens called langar. “When Guru Nanak spent his 20 rupees—meant for selling goods at a profit—to feed hungry sadhus as a ‘sacha sauda’, the tradition of feeding others irrespective of caste, community or religion has only grown,” he says. “All this food is emerging from that fixed deposit.”

An article in The New York Times last year hailed the Sikh community for feeding both New York City hospital workers and protesters marching against the killing of George Floyd. 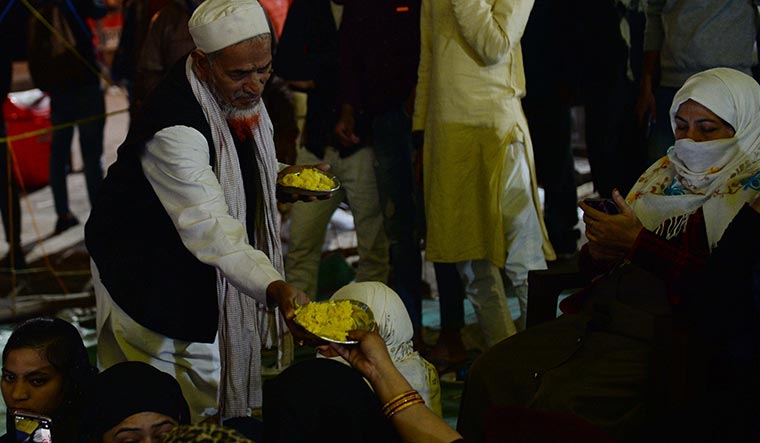 Sukhwinder Singh from Karnal has been manning one of the busiest langars since the last week of December at Singhu. Missi roti and sarso da saag are served with home-made butter and ghee, green chillies, chunks of jaggery and buttermilk to a snaking queue, as tractors playing blaring disco music cart in bottles of drinking water. “We will continue to make this here until the [farm] laws are repealed,” says Sukhwinder.

Sulakhan Singh shows off the technical prowess of a bulky, automated roti-maker while pointing out mechanised boilers, vegetable cutter and potato peeler which has helped to feed thousands of protesters every day. He wakes up at 4am and is on his feet all day, preparing four meals every day. “I have never cooked in my house. But here I am cooking every day,” he says with great pride.