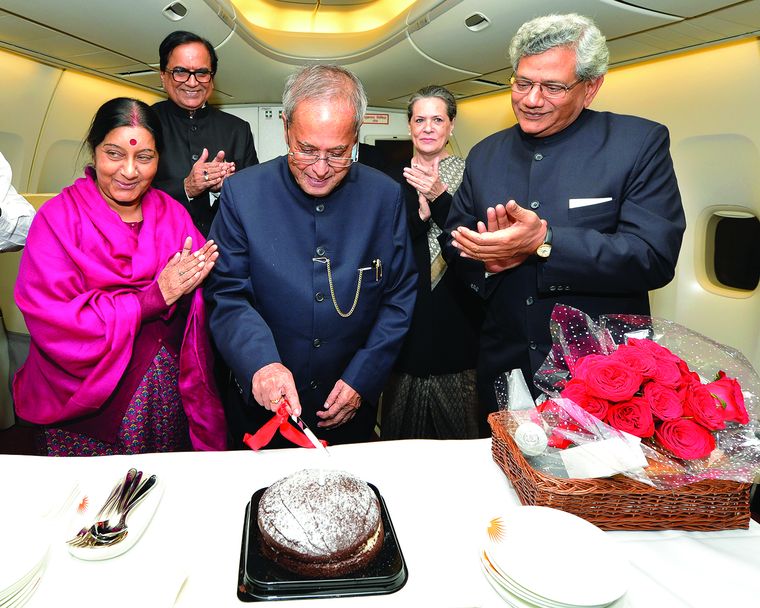 People Person: Mukherjee celebrates his 78th birthday aboard Air India One on his way back to India from South Africa in 2013

It was Republic Day in 2013. President Pranab Mukherjee had prepared a speech that dealt with the Nirbhaya rape and murder case. But prime minister Manmohan Singh gently advised against an elaboration of the incident. “Given the prevailing situation, I thought it was a wise suggestion and accepted it,’’ Mukherjee writes in his posthumous book The Presidential Years. “Barring this speech, I never had issues with the UPA government in my other speeches.”

The horrific crime, he writes, “had troubled my conscience as well”, but as president, he needed to “demonstrate calm and dignity”. The book, which was at the centre of a controversy when Mukherjee’s son tried to block its printing, is a masterclass on the Constitution. Mukherjee speaks his mind in his usual professorial, almost grandfatherly, manner. His concerns as president, which are peppered throughout his speeches, are dealt with in the book; they include disruption of Parliament, disintegration of the question hour, the legacy of Jawaharlal Nehru being under threat and concerns about the environment. He also writes that he was not “enthused” by the scrapping of the Planning Commission, but he did not wish to rake up a controversy by opposing it publicly. “I personally feel it was a mistake, a blunder,” he writes.

He says that he had a cordial relationship with Prime Minister Narendra Modi. “However, I did not hesitate to give my advice on matters of policy during our meetings. There were several occasions when he echoed concerns that I had voiced. I also believe that he has managed to grasp the nuances of foreign policy quickly.” The demonetisation—and the manner in which it was done—seems to have got his approval. “I learnt of it along with the rest of the country,’’ writes Mukherjee. He opines that demonetisation could not have been done with prior consultation because the surprise, necessary for such announcements, would have been lost. There is, however, a comment on how the prime minister’s office is growing more powerful under Modi.

He offers advice to Modi: “PM Modi, now in his second term, must take inspiration from his predecessors and provide visible leadership. He must listen to the dissenting voices and speak more often in Parliament. He must use it as a forum to disseminate his views to convince the Opposition and inform the nation.” He says that the Congress has to “evolve a different approach” and that he firmly believes his presence in active politics would have helped the Congress avoid the drubbing it got in the 2014 general elections.

There are thoughts on the judicary—he believes that there should be more frequent interactions between the executive and the judiciary. He also talks about how he dealt with mercy petitions. Mukherjee rejected 30 mercy petitions, including those of Ajmal Kasab, Azfal Guru and Yakub Memon. “I was constantly aware while handling such cases that... his life was in my hands,” he writes. “It was not an ordinary, routine government file I was dealing with. I used to take more than a week to read the case history and the court judgments.” Mukherjee also admits that parts of the established process, such as informing family members and arranging a visit from them, were perhaps “not fully adhered to” in the case of Memon and Guru.

The book is littered with anecdotes. He writes about president Barack Obama’s visit for a Republic Day parade. It rained and the American secret service refused to let Obama ride in the same car as Mukherjee. He talks of the special relationship with Bhutan, and of lecturing Delhi Chief Minister Arvind Kejriwal that he should not behave like an activist.

As president, he travelled extensively. It was in close consultation with the prime minister. Modi always had a meeting with him before he went abroad. Mukherjee was entrusted with delivering the message of India’s staunch support to Russia. Russian President Vladimir Putin, says Mukherjee, understood India’s concerns of Pakistan being given weapons. Mukherjee raised the issue of Pakistan’s terrorism internationally, as he felt it that it needed to be done. But Pakistan, he says, is not an enemy. The surgical strikes got his support, but he did not approve of the “overspeak” about it.

He also writes candidly about China. The importance of the Dalai Lama and Tibet is not lost on Mukherjee. One of the few presidents who met the Dalai Lama in person, he writes that the meeting was personal and that he made it clear to China during his visit in May 2016. It was one of his last visits as president and he narrates a delicious anecdote about a conversation with Chinese President Xi Jinping. Xi, writes Mukherjee, began a discussion on historical issues and asked him to explain the functioning of the Indian government in its constitutional framework. He had a host of questions and Mukherjee, being a student of the Constitution, had all the answers. They spoke in English and the interpreter was used only rarely. None of the guests had an inkling what was being talked about, he writes.

Mukherjee has also focused on domestic issues, even on the controversial aspects of his tenure, and on the constitutional crisis in Arunachal Pradesh. He says Article 356 is one of the “most contentious provisions’’ in the Constitution.

He points out that Modi did not “invent the wheel”. India had a great relationship with Japan before Modi. Demonetisation was also toyed with by the Congress. He also says that he opposes expressions of personal friendships (Japanese Prime Minister Shinzo Abe called Modi his most dependable friend) because friendships are between countries. He writes: “I do not subscribe to the belief that such special friendships have any worth when it comes to international relationships, where every relationship is impersonal.” 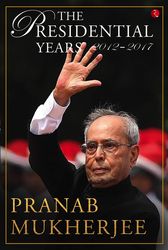