Memoirs of a diplomat

Ambassador Pascal Alan Nazareth’s book, A Ringside Seat to History, is an autobiographical account of his life in the Indian Foreign Service from 1959 till his retirement in Mexico City in 1994, and life post-retirement. Written with a delightfully light touch, the narration is frank and honest, with no effort to hide the unpleasant or awkward situations in the 35 years of his distinguished diplomatic career.

Jawaharlal Nehru, who was then prime minister, took great interest in foreign policy and the chosen officers were given an audience with him. The author’s initiation into diplomacy is presumed to have begun with his brief encounter with Nehru when the latter remarked that “a diplomat should not lie, but there is no obligation on his part to tell the truth either”. For Nazareth, serving the nation as a diplomat was a call of duty and honour. He dispels the commonly held belief that a diplomat’s life abroad is all about wining and dining, but shows that it is a multitasked role that is shaped by hard work, devotion, experience, observation and reflection. The silent sacrifices of a diplomat’s family—having to adjust and adapt to postings abroad, frequent travels, and making new associations and friends—are all unrepentant commitments in the service of the nation.

The author provides a ringside view of global developments, showing how Indian diplomacy, conditioned largely by non-aligned foreign policy, navigated the Cold War rivalry and defended interests of the newly liberated and independent countries that looked to India for leadership and support. Nazareth’s postings were often challenging, tricky and delicate, but he managed to resolve issues with presence of mind, tact and foresight. He gives insightful accounts of his meetings with several world leaders and their geopolitical implications for India. He also touches upon the crossing of the Dalai Lama into India; the revival of a devastated Japan post World War II; the liberation of Bangladesh; the military coups in Burma, Ghana and Chile; and India’s relations with the US, the UK and Russia.

The author believed that India’s ’soft power’ lay in its rich and composite culture and took advantage of his posting as Director General of the Indian Council for Cultural Relations (ICCR) to organise several cultural events, including the Festival of India in Paris in 1970. He also opened several Indian Cultural Centres abroad. Nazareth continued to be active after retirement, giving enriching lectures on Indian culture and philosophy abroad. His strong conviction in Gandhian values made him establish The Sarvodaya International Trust and write two books on Gandhi.

The penultimate chapter, about the author’s personal tragedies, was touching. His immense sorrow at the sudden death of his younger daughter, Seema, makes an emotional connect with the reader. He worked tirelessly to keep her memory alive by instituting an annual award in her name for young journalists and also by helping the underprivileged girl child with educational scholarships through an endowment.

The Indian Foreign Service today is much larger and richer with officers from diverse backgrounds, including a significant number of lady officers who are placed in vital roles at headquarters and abroad. For IFS officers, the book provides useful insights about what makes a successful diplomat, while for others it provides a close ringside view of history. Nazareth aptly encapsulates in his book that zest for life comes from being passionate about doing what one truly believes in. 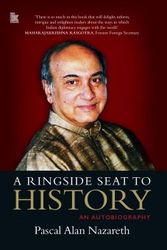 A Ringside Seat to History