2021 could be the year of women-centric films and series 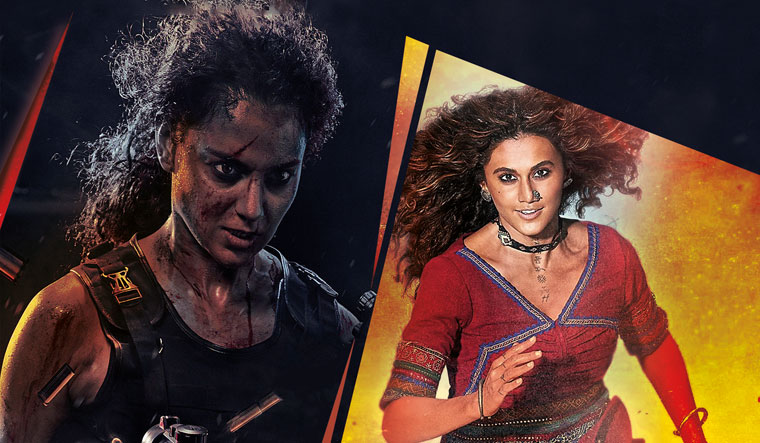 Powering Ahead: Kangana Ranaut in Dhaakad and Taapsee Pannu in Rashmi Rocket

Early last week, a poster of Kangana Ranaut’s upcoming film Dhaakad was released, showing the actor firing a machine gun in the spy thriller. In a statement to the media, Ranaut said that the film is a “one-of-a-kind female-led action film” that would be a “turning point” for women in Indian cinema. Around the same time, Taapsee Pannu posted pictures of her physical transformation for the lead role of a sprinter in the upcoming sports drama Rashmi Rocket. Kajol, dressed as an Odissi dancer, too, had shared the trailer of her web debut with the Netflix original, Tribhanga, a drama revolving around three women belonging to different generations in the same family.

As Bollywood emerges from the ruins of a crushing year and steps into the warm embrace of the next decade, an interesting statistic gives reason for cheer: 2021 already has about 20 scheduled films or web shows that have a strong female presence and gripping narratives that go beyond a typical Bollywood director’s dream-girl stereotype.

These include biopics (on Saina Nehwal, Mithali Raj and J. Jayalalithaa), dramas, thrillers and action-packed content across platforms. The trend, say experts, is driven by the hunger for female-driven content and the bankability of female stars like never before. The last year, too, saw the release of several films and series in which women took charge of their stories. Deepika Padukone’s Chhapaak and Pannu’s Thappad enjoyed theatrical releases before the lockdown. They spoke about issues that are central to the everyday lives of real women. Content released across OTT platforms found takers across the country, be it Bulbbul, in which a child bride grows up into an enigmatic woman, or Aarya, about a woman’s tryst with the drug mafia, or the biopics of Shakuntala Devi and Gunjan Saxena: The Kargil Girl.

“We have always had films in which women have played an integral part,” says Taran Adarsh, film critic and trade analyst. “For instance, Mother India (1957), was the first full-fledged feature film with a very strong female narrative. Although a female-centric film by itself is not a new trend, what is exciting is the frequency and volume with which these are being dished out now and the way the audience is lapping it all up. That is unprecedented.”

Earlier, when Bollywood was hero-centric, only one or two women-led films were screened in a year. Rekha in Ijaazat (1987), Shabana Azmi in Fire (1996) and Tabu in Astitva (2002) are some examples. In recent times, there have been at least four big releases a year, and the double figures of 2021 comes as a new high. Moreover, the plots and roles written for women are also relatable to the realities of women across class, caste and location. 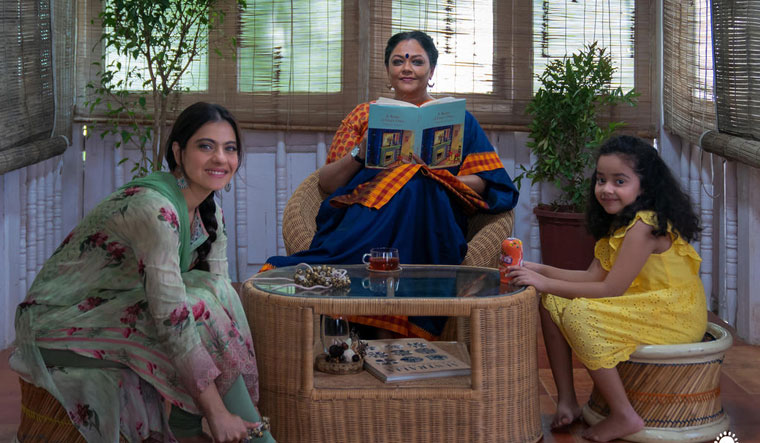 With the #MeToo movement further adding spark to the conversations around feminism in cinema, movies are now giving a voice to the woman who is at the heart of the conversation—be it the manual scavenger, the harassed bride, the sex worker, or the transgender woman.

The last decade began with one strong and memorable woman-centric story every year—Priyanka Chopra’s Saath Khoon Maaf (2011) and Vidya Balan’s Kahaani (2012) set the trend. With the release of Queen, Mardani and Highway, 2014 was a big year for women. Thereafter, films such as Piku (2015), Lipstick Under my Burkha (2016) and Period. End of Sentence. (2018) changed the dynamics of filmmaking in favour of the lady. The commercial and critical success of these movies then went on to motivate writers to ideate—and female actors to demand—more substantial roles. “Critical acclaim and box office successes of these projects were enough to convince filmmakers to cash in on the trend and then a further boost came in when digital platforms and digital screening entered every nook and corner of the country,” said Adarsh. “Now there is more content on women, and by women, than ever before.”

More than half of the Hindi films and series released on Netflix have had women that play complex and strong characters. “With Tribhanga, Bombay Begums, Mai and more, this year we hav e a long lineup of content focusing on women,” said Srishti Arya, director of international Original films, Netflix India. “Half of the world is women and it is about time the control went to them as well. We are seeing that more women creators are feeling empowered to tell stories from their point of view and about issues faced by real women in society.”

The case of Tisca Chopra is an intriguing one. The actor had started out years ago by playing supporting roles before coming into her own with critically acclaimed short films like Churri and Chutney on YouTube. Chopra recently took the plunge as a director with another short film, Rubaru, in which she plays an ageing female star gradually fading from the screen. “It is more about acceptance and skills,” said Chopra. “Women are more than just beautiful faces, and acting is a talent which is gender neutral. I think women are now braver in their choices of roles, and the plethora of platforms available now are only making us much more assertive than ever. There is no age for talent and as women we are discovering this only now.”

Poster of Tejas featuring Ranaut, which is set to release in 2021

Thappad, which is about a wife’s protest of domestic violence, has been a symbol for the change we are witnessing in society in relation to gender norms. “I suspected that I would miss out on the male audience before the film went on floors, but it was surprising to see that men comprised a huge chunk,” said Thappad director Anubhav Sinha. “Of course, there were those who said it was anti-male, that it patronises women, and on the other end of the spectrum there were men who were ashamed of themselves after watching the film. So, yes, there is huge market for women-centric films because it pulls at a lot of heartstrings and is commercially viable too.”

OTT platforms have added vigour to the frequency, quality and delivery of female-driven content. Anvita Dutt who wrote Bulbbul (2020) sums it up in the message she writes for “every woman: Be Durga. Be Kali. Reclaim your story”. For actors like Aahana Kumra, Kriti Kulhari, Rasika Dugal and Saiyami Kher, OTT platforms have been a blessing that led them to showcase their hitherto hidden talents. It has also been an affirmation from the audience that they wanted to see real women who are flawed, yet gritty and liberated. “Now, there is no struggle for budgets, no reluctance from the audience and no hiccups by the filmmakers either,” said Kulhari. “Today, actors like me are in demand, after years of waiting, because there is a large canvas for creating stuff.” The actor, who started her Bollywood journey with Khichdi: The Movie in 2010, shot to the limelight with Pink (2016), and followed it up with Indu Sarkar (2017). She admits to have felt “overshadowed by a hierarchical star system which she could not fight”.

Likewise, Aahana Kumra, best known for her performances in Lipstick Under... and Khuda Haafiz (2020), was surprised that the audience lapped up stories like Veere Di Wedding and Four More Shots Please!. “It was telling of a mindset change and a cultural change we as a society are going through,” she said. “There have been men’s stories for so long that it is time for them to take a step back. Earlier, I would get smaller roles which were mostly set for pretty faces and vamps. I am a trained actor and substantial roles that value acting were tough to come by.” Kumra, recently won Best Actress in a Leading Role at Asian Academy Creative awards for her performance in Voot Select’s Marzi. 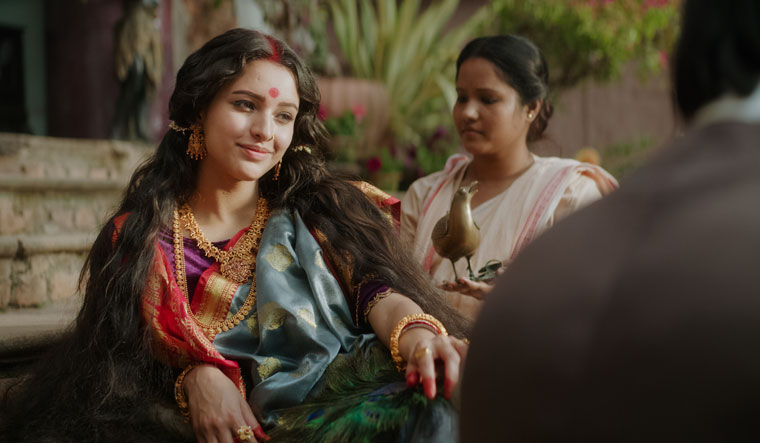 Bold, beautiful: Tripti Dimri in a still from Bulbbul

Filmmakers and actors also admit there have been many female-led films that were huge box-office duds. Bhumi Pednekar’s Durgamati (2020) is one such example. But, Pednekar, who is known for playing roles that address issues like self-image in Dum Laga Ke Haisha (2015) or hygiene in Toilet: Ek Prem Katha, said that a one-off hit or miss cannot rewrite the entire narrative. “The horror-thriller genre in Durgamati is the first of its kind, that too led by a woman. The audience needs to be open to consuming different concepts and being experimental,” said Pednekar.

Even as opportunities for female characters, female directors, DoPs and editors have opened up significantly in India’s entertainment landscape, mostly due to the entry of the OTT platforms, the age-old debate of equal pay still holds true. “It became more feasible financially to market a woman as the overall expenditure becomes lesser. That is one of the reasons why female-centric content started booming,” said Pannu. “The sad part is that we as female actors are paid one-tenth of the salary of a male actor.”

A well-known actress now in her 40s said that all the change is happening only in the case of younger women. “Older women are still relegated to the back burner even as older men continue to act with someone much younger to them,” she said. “It is when we get our time on celluloid, that we will believe that the change has indeed taken place.”