Spotlight on a mountaineering feat that has evaded Indians 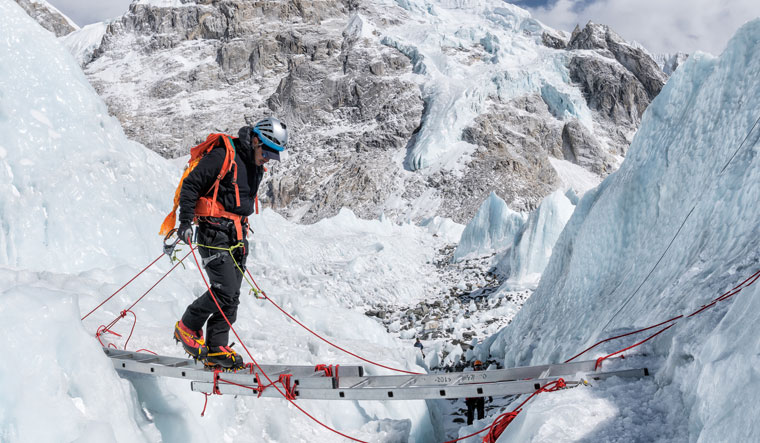 The most treacherous of the 14 ‘death-zone’ mountains in the world is said to be K2. Considered the last frontier in the climbing world, it is the only one among all the 8,000m-plus peaks that has not been climbed in winter. But high-altitude climber Nirmal Purja, aka Nimsdai, says he considers himself “next-level crazy”. He spoke to THE WEEK from Nepal before his December 20 ascent of the ‘Savage Mountain’. “We are only limited by our own imagination,” says the 37-year-old former Gurkha soldier. And, it might just take a climber of Purja’s boundless imagination to accomplish what nobody has before.

His experiences in some of the world’s sketchiest combat zones as part of the UK Special Forces can explain his incredible mountaineering feat in 2019. Purja summited all 14 of the 8,000ers in less than seven months, smashing the previous record of seven years and 11 months. All of these peaks are in the Himalayan and Karakoram mountain ranges spanning India, Nepal, Tibet and Pakistan. Some 40 mountaineers have managed to scale them all since the legendary Reinhold Messner first did it in 1986. While most of them took years, Purja’s speed and agility conjure up an image of a Super Mario leaping from peak to peak. He had good financial backing, bottled oxygen and Sherpa guides, but mountaineering experts still laud the remarkable speed.

“I put my own fixed lines and do it for others too,” says Purja. “I have rescued many others along the way, and if anybody does it the way I have done, by raising sponsorships, taking care of the logistics and politics, and dealing with the health of my mom, all at the same time, then we can talk. If you have not been in my shoes, then do not comment from outside.”

He represents a new-age climber who is ambidextrous. He is social media savvy, good with the camera—the 2019 photo of the long queue on Everest was his—talks about partying in the base camp and completes a memoir in just nine months. “Quitting is not in my blood, even in a near-death crisis. I was not a sheep waiting to be prodded by the shepherd; I was a lion and I refused to walk and talk with the rest,” Purja writes in his memoir, Beyond Possible. 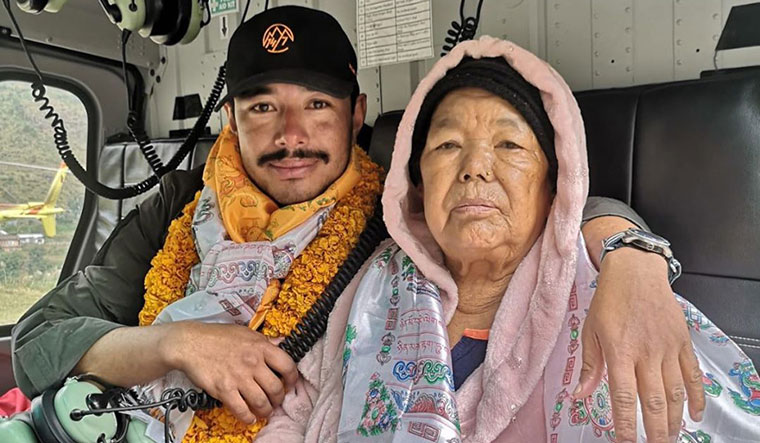 Purja with his mother

The youngest in a family from Dana village in west Nepal, Purja says his inspiration does not come from the mountains. “Muhammad Ali, Bruce Lee and Usain Bolt, they all inspire me. Look at their background, their lives were amazing,” he says.

There are two styles of high-altitude climbing: siege and alpine. The siege style of climbing involves a large support staff being employed at the base camp with equipment, gear and food. These are large expeditions with porters and Sherpas who open routes and provide help all the way to the top. Purists do not respect this method of mountain climbing. The Alpine style used by Messner requires a more technical set of climbing skills, and is carried out with no support staff or supplemental oxygen.

“The skill-set required to climb an 8,000er depends on how he or she wants to climb. Is it solo or alpine in a small team, expedition or guided?” says Brig Ashok Abbey, president of the Indian Mountaineering Foundation, which has been seeing a lot of interest in 8,000ers from young Indian climbers. He would not attribute it to the Purja effect, although it has caught their imagination.

He wants to urge young Indian climbers to develop their skills in a playground of mountains in the Indian Himalayas, where 340 peaks have been opened up and more are on the way. “Our climbers should do their own route opening, ascend in small teams, care for the environment and climb the mountain on their own steam. They will be able to replicate these on other bigger mountains,” says Abbey.

Chewang Motup Goba, president of The Himalayan Club and founder of Khardung La Challenge, says climbing became commercialised in the mid-1990s. He first climbed a mountain when he was 13 and even tried to climb Everest solo in 1985. Things have changed a lot since then. “You do not need to be a very good climber,” says Goba. “We know people who have climbed Everest but have never climbed in their lives before. There is much advancement in terms of weather forecasts, logistics and equipment that few things remain a big challenge, except avalanches and rock falls. 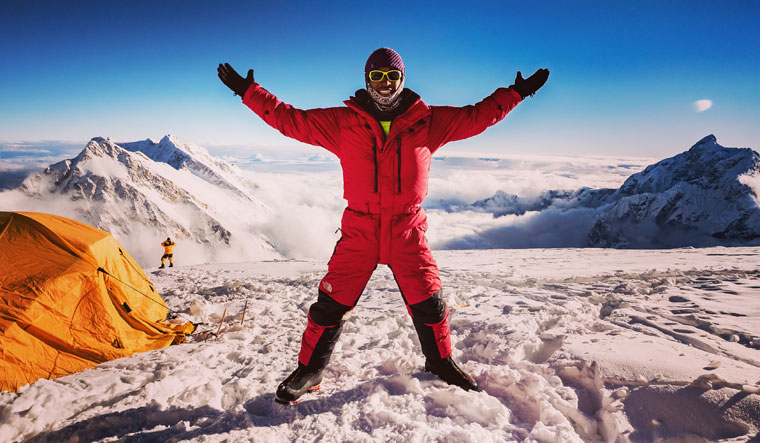 Indian mountaineer Arjun Vajpai, who wants to become the youngest climber to summit all 8,000ers, considers Purja a brother and a friend

Goba says one glaring hurdle for Indian mountaineers keen on 8,000ers is the political challenge. “Five of the 8,000ers, including K2, fall in Pakistan or Pakistan-occupied-Kashmir,” he says. “It is very difficult to get permits. That is one of the reasons no Indian has managed to do it yet.”

But that does not stop Noida boy Arjun Vajpai from dreaming. At 16, he became the youngest in the world to climb Everest. The 27-year-old now wants to become the youngest to summit all 14 peaks within the next three years. He has already climbed six of them by participating in 12 expeditions. He was once rendered paralysed after developing a medical condition at Cho Oyu. 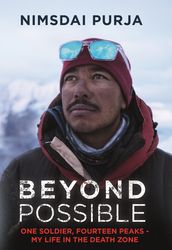 “China and Tibet will not be a problem. They still hold mountaineers in a different regard,” says Vajpai about the political hurdle. “About the remaining five in Pakistan, four of them are in the PoK region which is actually part of India. If we ask for permission, [we give up our claim on the land]. For K2, I hope the relations between the two countries [improve], but I have alternatives to actually go about this. I will go there in disguise if need be!”

Vajpai considers Purja a brother and friend. “You have to meet this guy in the flesh to believe how crazy one needs to be to pull this off,” he says of Purja. “His feat is unlikely to be replicated in the next two decades.” He says high-altitude climbing is perhaps the most expensive extreme sport with each peak requiring an investment of Rs35 lakh to Rs50 lakh. Last year, Vajpai had to turn back 291m away from the summit of Annapurna (8,091m) because of bad weather. “If I do Annapurna next year without oxygen, I will be the first Indian to do so,” says Vajpai.