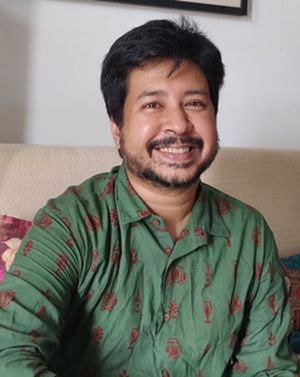 Samit Basu is an author and filmmaker who strode into the speculative fiction scene in India with his internationally acclaimed Gameworld Trilogy. He co-directed the Netflix movie House Arrest, and his book Chosen Spirits was most recently shortlisted for the prestigious JCB Literary Prize. Excerpts from his conversation with THE WEEK:

From what was predominantly a myth fiction-heavy market to the political, surreal and subversive beast that it has now become, how do you evaluate India’s SFF evolution? Where do you see it going in the future?

There is certainly a large market for muscular fantasy works that retell Hindu religious stories, especially if they have covert or overt nationalistic themes and visions. I think this is an offshoot of the wider mainstream rise of majoritarian nationalistic religious/cultural expression rather than anything to do with genre fiction publishing. And I don’t think any of the political/subversive/surreal fiction that is separate from this stream of fiction has been exposed to a market in any way similar in size to this religious/myth fiction. Speculative fiction in India is published and reviewed and read as a subset of literary/general fiction, so it is a separate beast altogether. I think this subset has made considerable progress in the 18 years I have observed it.

Have India’s traditional television production houses failed to react to the growth of the science fiction and fantasy market?

Unlike in the West or East Asia, where the sheer size of the fandom for a popular book might propel it into production, in India you have to depend on selling a pitch as you would for a completely new idea—and it doesn’t help that very few people in film/show universes actually read anything. It is also expensive and difficult to produce SF/fantasy shows and films, and producers are reasonably risk-averse both in terms of expense and in terms of untested ideas/genres. I think that has much more to do with the lack of SF/fantasy shows in India that aren’t overtly religion/myth themed than anything else.

Your works (in our subcontinent) were one of the first to introduce Indian and non-white characters into the global SFF milieu. How difficult a task was it to gain mainstream acceptability for a little-known genre back then? How far have we come since?

India doesn’t really operate on the basis of genre. Speculative fiction is still published by general/literary fiction imprints. We have examples of magazines and conventions and fan groups and other features that are common in the west and in East Asia, but all of these are in their early stages. So, what we are seeing now is the slow growth of something interesting. As far as acceptability is concerned, I have to say it hasn’t been much of a problem in India, but maybe it was because I was lucky and my first novel did well both among critics and in terms of sales, and there have been kind readers down the years.

It is also relevant that India is a vast country, and most of the writers working in speculative fiction are writing things that are very different from one another, so we’re still very firmly in the early-growth stage, and we will only get to have a clearer picture when there are, say, about 20 books coming out every year from major publishers. That is when the space becomes mappable.