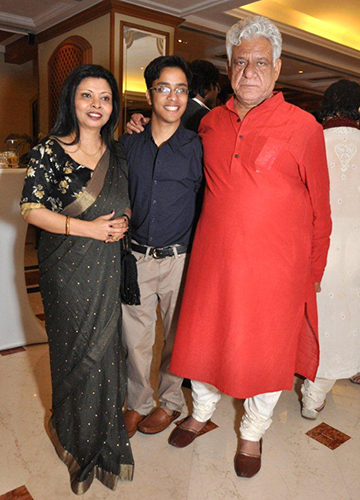 Together time: The family on ishaan’s18th birthday, a few months before om’s death.

For years, as a small child, Ishaan wanted to become a pilot,” actor Om Puri, who passed away three years ago at the age of 66, once said about his son. “Now, he wants to become an actor. Once, his mother jokingly asked him, ‘So you want to be a hero?’ No, I want to become a good character actor like baba, he replied. It was one of the proudest moments of my life.”

Ishaan, 21, still wants to become an actor like his father. After he returned from the sets each evening, Om used to relax with a drink. He would call Ishaan and give him lessons on acting, with examples from his own career. It is still in the evenings, when Ishaan’s classes finish—he is learning business studies at the London School of Economics—that he misses his father the most. “He would tell me that whatever I did, I must work hard at it,” says Ishaan. “And above all, to be a good person.”

It is to celebrate Om’s life, legacy and philosophy that Ishaan and his mother, journalist and author Nandita Puri, launched a YouTube channel, Puri Baatein, recently. Initially, the channel featured a few celebrities like Illa Arun and Sonu Nigam wishing Om on his 70th birthday, along with an introductory video by Nandita and Ishaan recounting a few memories of Om. Like how, whenever they used to fight, Om would get livid at Nandita for using difficult English words. “What does the word ‘zilch’ even mean?” Om, who hailed from a village in Punjab, would ask. When Nandita explained it meant zero, he would be bemused. “Then why can’t you say ‘zero’, you convent-educated woman?” he would yell.

Currently, six episodes have been uploaded on the channel, including a tribute to Om by Salman Khan. According to Nandita, they will get various people whom Om worked with, from Shyam Benegal to Steven Spielberg, to talk about him on the channel. In addition, Puri Baatein will showcase his work and feature discussions on various topics that were close to Om’s heart. “It will be a virtual Om Puri museum and beyond,” says Nandita. Interestingly, Nandita and Om, who met on the sets of City of Joy (1992) when she went to interview him, had a tumultuous relationship which ended in a judicial separation. Reportedly, Om was not happy with Nandita’s expose of some of his past relationships in her 2009 biography of him, Unlikely Hero. But Nandita says that is all water under the bridge. “A lot of it was made up by the media,” she says. “Ultimately, I remained his wife. People can say what they like.”

Some of Ishaan’s best childhood memories are of visiting his father on the sets of his movies—of breaking into a raga for Pakistani singer Farida Khanum and of chatting with Amitabh Bachchan in his vanity van. “We still call each other ‘buddies’,” Ishaan says with a laugh. But he also knows that by following in his father’s footsteps, he has large shoes to fill. “It does feel daunting to pursue a career in acting,” he says. “I feel the weight placed on my shoulders. There is no way I could match up to my father.” If possible, he wants to start his innings in Bollywood with a Kabir Khan film. “My father used to call Shyam Benegal an encyclopedia because of his vast knowledge,” says Ishaan. “He saw a similar quality in Kabir Khan. He would call him a ‘mini encyclopedia’.”