The pandemic is threatening the livelihood of Indian classical musicians 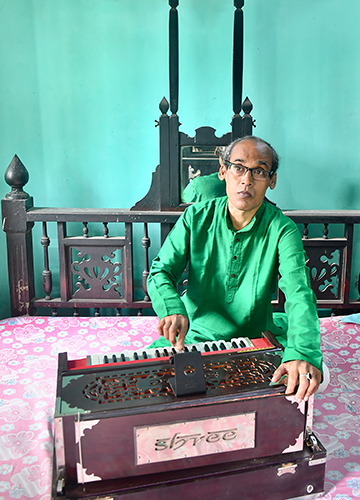 When Pandit Rameshwar Prasad Mishra started training under his guru, Bade Ramdas Mishra of the Benares gharana, memory was his only aid. “We would practise in the morning and evening. My elders would say that the pets would be fed, but not me if I skipped riyaz. Every raag had to be mugged. There were no notations or recordings to fall back on. My guru would say that music is not a grocery list that can be noted [down]. It needs to seep into one’s being,” says Mishra, 75.

For classicists like him, the use of technology in any form is abhorrent to the spirit and purity of music. The lockdown and the loss of earnings have not changed this view. “Technology is a bad master,” he says. “It enslaves one. You put on an electronic tanpura (an instrument that provides support to the singer with a harmonic drone) and it plays on monotonously, leaving no room for improvisation. And what if the electricity goes off? You are suddenly clueless,” says the Lucknow-based vocalist who still practises with the manual tanpura, which lies neglected since the advent of its electronic counterpart.

Classical music is an acquired taste, its cadence, lilt and melody lost to an untrained ear. Of all the luxuries that have taken a beating during the pandemic, music is amongst the worst hit. Even for those who have adapted to teaching digitally, there has been a steep dip in the number of students. The pandemic’s moral obligation to pay household help or factory employees did not extend to such fine arts teachers. Many who grapple with the intricacies of performing in online concerts do so only to remain in the public eye, mostly without any remuneration.

Classical music feeds off the energy from the close bond between guru and shishya. Thus, face to face interaction is its most vital element. It is an oral tradition which requires time and patience. Critics believe such rigour limits its appeal. Chandrima Roy, 45, a sarod player from Delhi who trains under Pandit Narendra Nath Dhar, says that the greatest benefit of learning in the tradition is that it compels a disciple to be “100 per cent focused”. “You cannot just switch on and off,” she says. “The class continues beyond the physical environment. Music is an art unlike any other. You cannot, say, as in a painting, touch up a mistake. The guru progresses as per the student’s ability. One needs to be very sure-footed. If you pick up something in a hurry, you can carry the mistake for the rest of your life.” Roy adapted well to the demands of lockdown–both learning and teaching digitally. On her guru’s birthday, she and her peers hosted a ticketed online concert by him to raise money for other struggling musicians.

“Not keeping in touch with students would have been disastrous,” she says. “Finding the correct note and pitch is a challenge with new students. As is the time lag in the transmission of sound (due to internet bandwidth). Online teaching has to be doable, not intricate. On the upside, I have been able to reach out to audiences and students from overseas, something I would never have imagined possible.” 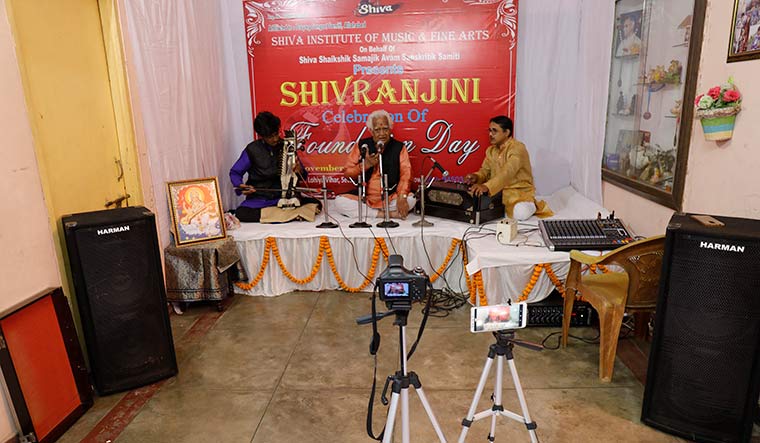 For Pramod Upadhyay, 50, a student of Pandit Mishra, the struggle to learn how to teach online was compounded by the haggling of the students’ parents. “They tell me, ‘you are saving money as you do not travel to teach, you must reduce your fees’,” says Upadhyay. According to him, such demands are unlikely to have been made of, say, tuition teachers. To supplement his dwindling income, Upadhyay started a tiffin service. He mentions peers who have been forced to sell vegetables to stay afloat. 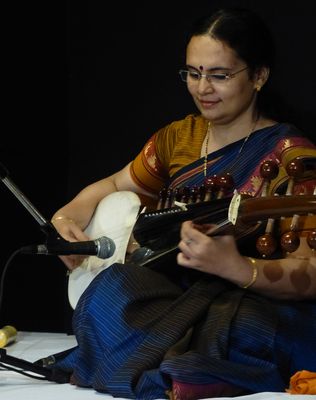 Chandrima Roy at a concert in Delhi | Avinash Pasricha

But classical music’s troubled tryst with technology is not new. With the advent of mobile apps, for instance, one can do away even with the electronic tabla. Voices can be tuned to a perfect pitch, making even the most technically deficient singer sound melodious. “It is no longer a sadhna (disciplined learning). Parents come to me and their first question is, by when will our child be ready to perform in a concert? I tell them music is not a time-bound contract,” says Upadhyay, who will not let either of his two children pursue a career in music despite their talent.

Between Upadhyay’s and Mishra’s generations the use of the tanpura has almost vanished. Upadhyay himself rarely practises with one. “This generation cannot even tell the difference between a tanpura and a sitar,” he says. Even among classical musicians, the worst affected are those who play accompanying instruments, such as the harmonium, as their income was derived from the main artiste’s earnings.

Howrah-based harmonium player Pradip Kumar Palit, 53, lost all his students during the lockdown. “Online classes cannot fill in for the chemistry between a teacher and a student. The way a guru moves, the way he breathes, are all part of the learning. The meeting of souls is not possible”, says Palit, who has tried to befriend technology.

“The work of an accompanist is more difficult as he or she needs to adapt to the mood and nuances of the main performer. A bad accompanist can ruin a recital,” says Palit, who is waiting for his students to return. He has tried in vain to look for other work. In Lucknow, Pandit Mishra says that time is all powerful and the pandemic will not last forever. But whether it will drown the melody of classical music is a question only time will answer.