Battle for the nation

The year was 1982, and Shashi Tharoor, who headed the UN office in Singapore, was in conversation with Khmer nationalist politician and one-time prime minister Son Sann, who lamented India’s support for Vietnam in its conquest of Cambodia in 1979. “You Indians have allowed yourself to forget that there is such a thing as Indic civilisation. And we are its last outpost,” Son Sann told him. The writer says he has been musing about the nature of Indian nationhood since then.

“He was bewildered that India, the fount of his country’s heritage, should sympathise with a people as distinctly un-Indian as the Vietnamese.... Given that Vietnam’s invasion had put an end to the blood-soaked terror of the rule of the Khmer Rouge, I was more inclined to see the choice politically than in terms of civilisational heritage. But Son Sann’s words stayed with me,” writes Tharoor.

The question of what it means to be an Indian has been a recurring theme in Tharoor’s writings. The Battle of Belonging retraces the evolution of the Indian nationalism and analyses the present-day churn on the topic. The book, well researched and scholarly, provides a historical background of the genesis of the idea of nationalism in a western construct, before going on to focus on the essential questions related to Indian nationalism.

Tharoor’s musings have led him to conclude that the idea of India has evolved much beyond Indic civilisation. He describes it as ‘civic nationalism’, as embodied in the Constitution, “sanctified by Indic civilisation and suffused by an ethos of pluralism”.

This, he says, was the Indian nationalists’ answer to the challenge posed by the partition. “On the other hand, the alternative was the hindutva idea of a Hindu country, espoused today by the BJP/RSS, the mirror image of the idea of Pakistan—a state with a dominant majority religion that seeks to put its minorities in a subordinate place,” writes Tharoor.

Moving to more contemporary developments, Tharoor makes a comprehensive critique of the ruling dispensation. He says that the “Hindutvavadis’ critique” of the Constitution is a fundamental one as their idea of its flaws lies in their core belief in the Hindu nation of their dreams as opposed to the civic nationalism enshrined in the Constitution of India.

Tharoor notes that, powered by Modi’s popularity, the BJP-RSS carries on with its hindutva project, and that nationhood now has to be seen through the prism of the Citizenship Amendment Act and the National Register of Citizens. The construction of Ram Temple, the ban on triple talaq and the revocation of Article 370, as recognised by Tharoor, form the cornerstones of the regime’s success in achieving the hindutva goals.

Tharoor’s critique of the Modi regime forms a much-needed chronicling of the contemporary developments. However, while Tharoor recognises that the fight back has to be essentially political, he does not go into the specifics of what needs to be done. He simply says in the end that the book is a call to action by those who see the merits of civic nationalism. 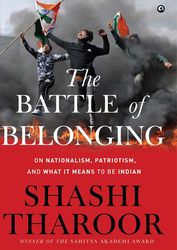 The Battle of Belonging: On Nationalism, Patriotism, And What It Means To Be Indian