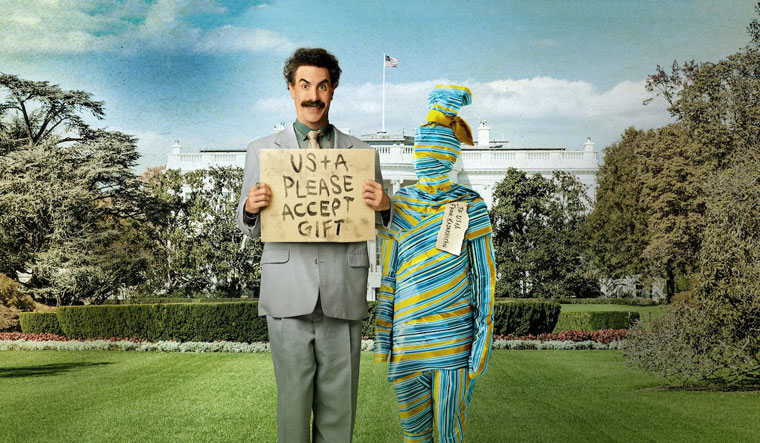 In 2003, billionaire-businessman Donald Trump was mooted an idea. “Me idea is to come out with these ice cream gloves that make the ice cream not go on your hands and make it all well sticky,” the man sitting next to him in wannabe gangsta-rapper attire bounced off his business plan to Trump, in a London black vernacular. Sensing that something was amiss, Trump walked out of the “meeting”. It was Da Ali G Show and the man sitting next to Trump was Ali G, one of the alter egos of British actor Sacha Baron Cohen.

A lot of water under the bridge and many alter egos (Bruno, Borat, and the many characters in the political satire, Who is America?) later, in 2018, Cohen reprised his Ali G self after President Trump’s former campaign manager Paul Manafort was convicted of fraud. “Yesterday it was proven in de courts dat u iz a crook—respeck! U iz a genuine gangsta,” an open letter from Ali G to Trump read. This year, Cohen slipped into his Borat Sagdiyev avatar—an outrageously offensive, racist, sexist and homophobic fictional journalist from Kazakhstan—once again in Borat Subsequent Moviefilm. The film is a follow up to his 2006 mockumentary-comedy, Borat: Cultural Learnings of America for Make Benefit Glorious Nation of Kazakhstan. Released on October 23, on Amazon Prime Video, the film ridicules Trump and his supporters, scoffs at conspiracy theorists and Holocaust deniers, and taunts Facebook.

Despite Cohen’s repeated insistence that he is a comedian and actor, and not a political commentator, he is deeply political, and has always been, in his own words, “passionate about challenging bigotry and intolerance”. In Borat Subsequent Moviefilm, the actor-writer has no qualms in revealing which side of the political narrative he chooses to be on. His most audacious stunts—barging into a Conservative Political Action Conference in a “Trump suit” to gift his daughter to “Vice Premier”, Mike Pence, making Trump supporters chant, “Inject him [Obama] with the Wuhan flu”—are directed at Trump and his cronies.

In yet another release in October, The Trial of the Chicago 7, the actor played the defiant Abbie Hoffman, an icon of the anti-war movement in the United States in the 1960s. Cohen embodied the spirit of a man unwilling to cow down to an authoritarian state and a complacent judiciary in Chicago 7, while in the second coming of Borat, he is the indecorous “alien”, who spouts uncomfortable truths about the establishment.

Cohen waltzed into popularity in 1998 as Ali G, interviewing popular figures and getting their goats with annoyingly inane questions. Bruno and Borat followed Ali G, establishing Cohen as a master of disguises. From nearly causing a riot by kissing a fighter in a cage as Bruno to getting two US Congressmen to endorse KinderGuardians—a programme that proposes to arm toddlers with machine guns—in Who is America?, Cohen has showed the world how laughable people can be, including those in a position of power. In Borat Subsequent Moviefilm, he gets a cake shop owner to write “Jews will not replace us”, seeks assistance in getting the best tool to “murder gypsies”, and admits to a pastor that he may have impregnated his daughter only for the pastor to come up with the response, “God does not make accidents”.

Cohen explains that through his alter egos, he tries “to get people to let down their guard and reveal what they actually believe, including their own prejudice”. He develops a backstory, and does enough research to be on top of the situation before slipping into a facial prosthesis or retreating into one of his oddball characters.

“My aim here was not to expose racism or anti-Semitism. The aim is to make people laugh, but we reveal the dangerous slide to authoritarianism,” he had said about the second coming of Borat. Cohen may continue sending in the clowns to lampoon those in power and mock the intolerant as long as society remains intolerant and bigoted.