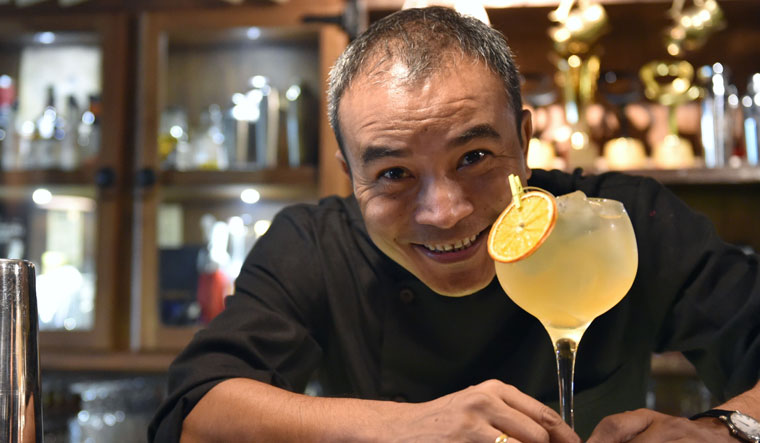 Sage and the spirits: Yangdup Lama is regarded as the Yoda of India’s alcohol and beverage industry | Aayush Goel

How would Yangdup Lama describe his bartending style? “Classic!” he says. He is observant, friendly and loves a great conversation. He is a benevolent barkeep in Delhi, which sounds almost fictional. It is like he wants to revive a culture where bartenders not only mix the perfect drink but are also part-therapists, part-philosophers.

With more than two decades of experience, the 48-year-old Darjeeling native is regarded as the Yoda of India's alcohol and beverage industry. The Delhi-based mixologist recently became the first Indian to enter Drinks International’s annual Bar World 100 list, a definitive list of the world's top bars. This came four months after his south Delhi bar, Sidecar, was featured in Asia’s 50 Best Bars 2020.

For Lama, born in Gayabari village in Kurseong, this validation can only be a sign of a brewing renaissance. “It comes at a time when you need it most,” says Lama. “From here on, more Indian bars will start featuring on the world's best list. The shift is really tilting towards Asia.” He adds that a whiskey from Goa, Mithuna by Paul John, was ranked the third-best whiskey in Jim Murray's Whiskey Bible 2021, and one of the world's best bartenders right now is a South Korean woman—Bannie Kang, based in Singapore.

The history of cocktails and drinks has been shaped by wars and historical epochs in the last 200 years. A churning awaits the Indian drinking world, too. For Lama, Sidecar already represents what bars in post-pandemic India need to be. “It is purely about service culture,” he says. “Sidecar has no DJs, no dance floor, no Friday or Saturday night mayhem and no rock’n’roll bands. You can read a book or catch up with a friend. The idea of a bar is not about making a lot of noise, getting drunk or being squished in crowds. We play a specific kind of music at a certain volume. Patrons are encouraged to interact with bartenders and owners.”

As most of his conversations have revolved around life in quarantine since Delhi bars reopened on September 9, Lama would much rather look ahead. So, he shares with THE WEEK three invigorating post-quarantine cocktails he devised: