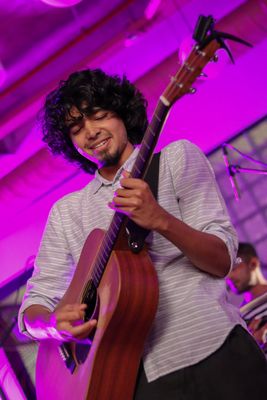 Popular Kerala quartet When Chai Met Toast has been serenading listeners with soulful English, Malayalam and Tamil songs for the last four years. It is now on Spotify’s global emerging-artist programme, Radar. This month, the multilingual pop-folk band released their first full Hindi single, ‘Kahaani’, with lyrics by popular singer-songwriter Ankur Tewari. It is part of an upcoming album When We Feel Young. Achyuth Jaigopal, guitarist with WCMT, talks about first love, song-writing and new numbers.

Q/ What is ‘Kahaani’ all about and what made you compose it?

A/ ‘Kahaani’ is an incomplete love story about two right people meeting at the wrong time. It is about that first love that did not work out when we were young. Sometimes even when things seem perfect, they do not go the way we plan due to reasons we are unable to handle at that point. The essence of the song is the emotion of acceptance. Our songs stem from experiences that we have gone through, and ‘Kahaani’ is no different.

Q/ Why did you approach Ankur to write the lyrics?

A/ Though we speak and sing in Hindi, we found it difficult to write a whole song in Hindi with meaningful lyrics. Ankur is a long-time friend from within the Indie music circle and a brilliant writer. So when we knew that the song would suit Hindi words, there were no doubts about whom we would contact first. The initial draft he wrote, on a paper napkin during a flight, ended up working perfectly with the melody we had composed.

Q/ Are you planning on working with Hindi lyricists for more songs? Or would you attempt to write them yourself?

A/ There are no plans for now, but when we compose a song that calls for Hindi lyrics, we will consider collaborating with other lyricists then. We have written small verses in Hindi ourselves as well, in a few of our songs.

Q/ How has the pandemic helped you grow as a band in the last few months?

A/ The pandemic has been quite difficult, especially being a band that spends half its time travelling across the country performing live shows. However, on the brighter side, we have been able to produce and complete songs we had written earlier. We also released three songs from our upcoming album, When We Feel Young, during these months—’Maybe I can fly’, the title track, and ‘Kahaani’. Though we have not been brimming with ideas, we have kept ourselves busy honing our skills.