Painter Soma Das details the delectable in the drab 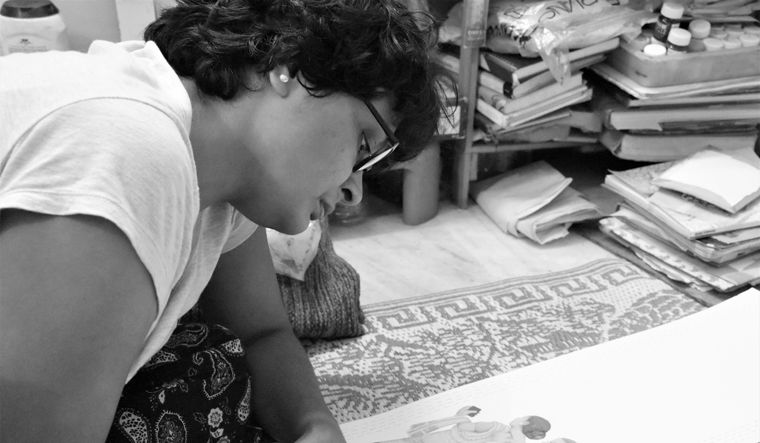 Mughal miniatures have elegant, manicured gardens. Soma Das’s paintings unfold against insipid urban sprawls. Traditional Indian miniatures have kings and courtiers with their stately elephants and glittering forts. Das’s paintings contain hoi polloi in their slapdash huts and tenements. Ancient miniatures portray exquisitely bejewelled women waiting in love and longing. Das paints scruffy women all knotted up in the exhausting drama of everyday living. But there is bold, vivid imagery in both, a riotous interplay of colours and gatherings, and much handsome detailing. “I have imbibed all the techniques of detailing, arrangement, narration and aerial perspective from the tradition of miniature painting,”says the 41-year-old Kolkata-based artist, who quotes the quotidian in her canvas in the style of a neo-miniaturist.

Drawing inspiration from south Asian miniature art, Das has been consistently reinventing the genre to reflect her own struggles and memories with equal parts irony and pathos. Her most recent work, made in lockdown, is a simple, one-room house. It could just as well be a shelter, crammed to capacity in a time of social distancing, with three kids, a homebound father, grandparents, utensils, furniture and a mother bent over a hot tub of oil, deep-frying batter. “I saw this scene near my house,”says Das. “It is a difficult time. But still, there is a sense of elation in this family stuck at home.” 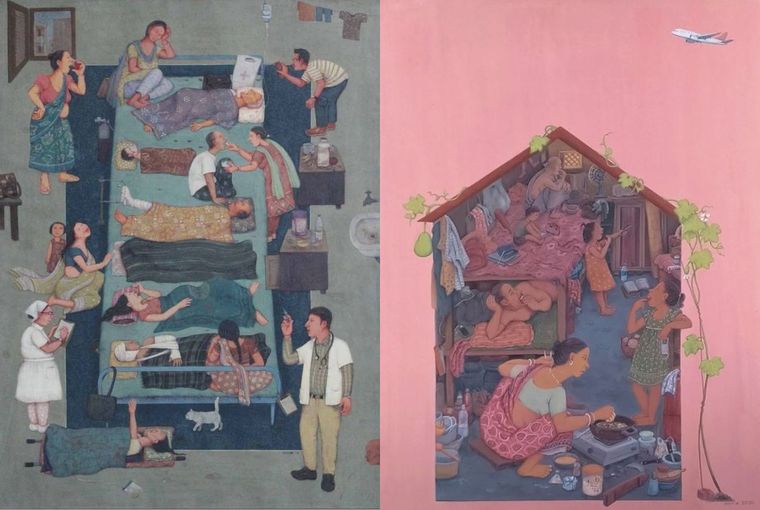 She recalls her own conservative upbringing. Born in New Barrackpore, West Bengal, to a carpenter father, Das grew up with restrictions aplenty. But she was fond of drawing and sketching, and eventually found her way out of the confines of house arrest to study visual and fine arts at Rabindra Bharati University in Kolkata. It is in the university’s library that she was first exposed to the illustrious world of miniature paintings. The fine-grained rigour and discipline of executing traditional motifs and patterns of a miniature seeped into her artistic style. “Even though I haven’t been trained in the exact techniques of miniature painting, by studying the ancient folios and plates, reading and researching in museums and galleries, I have found my own language and interpretation,”says Das. Hence the traditional handmade wasli paper meant for miniatures is replaced with Nepali paper, and gilded borders of illuminated manuscripts have slipped off from Das’s oeuvre. “The Nepali paper, also handmade, is just like me,”says Das. “I can relate to it; it is very absorbing, and borders falling away from my paintings depict my gradual discarding of boundaries and restrictions which had earlier impeded my growth.”She has been officially represented by Kolkata’s Emami Art gallery for modern and contemporary painting since January 2019. 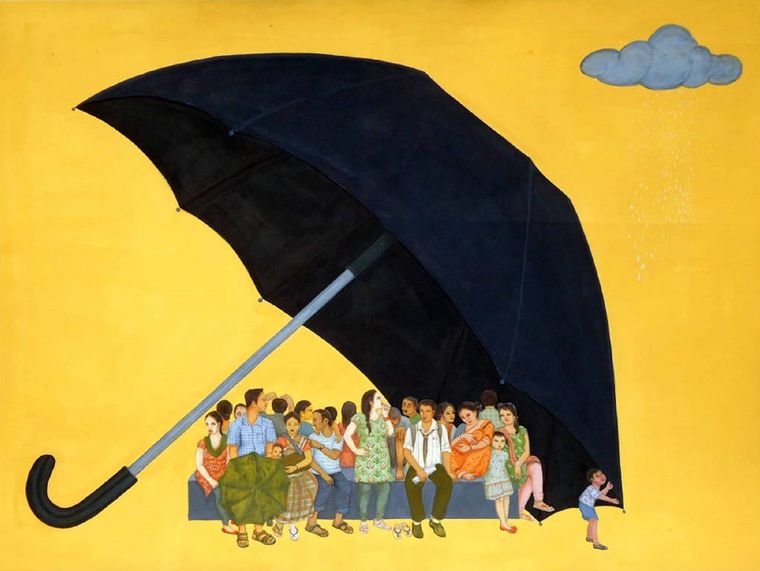 Das does not yet know how the artist in her will respond to the recent super cyclone that devastated her city. She is still sifting her thoughts about it. Her previous works offer clues. She draws our attention to a canvas in mustard with a large black umbrella tipped with a stray, pillowy cloud. Under the canopy of the giant umbrella is an assortment of strangers awkwardly huddled together. “A bonhomie is created when they are suddenly stuck in pouring rain in the middle of nowhere,”says Das. In a stunning blue tableau titled ‘Hell in the Earth’, she translates a medical inferno into a carefree, chaotic hospital ward with harried patients splayed out in one large bed, alongside anxious relatives, with poker-faced doctors and nurses prowling amidst corpses, cats and cockroaches. In a 2016 canvas, migrants from a neighbouring country, unable to breathe in their poky, makeshift houses, spill out on to the railway tracks and learn to cook, wash, clean, dry and dream under the arch of the summer skies. “There is delight and hope in everything,”says Das.