The flagship and the killer

Every fall, Apple sets the benchmark in mobile phones with a new iteration of the iPhone, leaving the competition to play catchup for the rest of the year. OnePlus, which once was called the Apple of China, however, saw the whole game in a different light. It called its first phone, the OnePlus One released in 2014, the ‘flagship killer’. It was the perfect antithesis to the swanky, expensive iPhone—comparable features at half the price.

It repeated this every year. While the iPhone 11 Pro released six months ago costs about Rs1 lakh in India, the OnePlus 7T Pro, released around the same time, comes at just about Rs53,000. Two weeks ago, however, things turned upside down. Both Apple and OnePlus announced their new phones, and for a change, the OnePlus 8 Pro looks like a flagship and the iPhone SE a flagship killer. 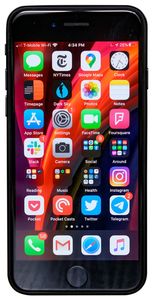 The iPhone SE is powered by the same A13 Bionic processor that debuted in the iPhone 11 Pro, which guarantees outstanding performance and also OS updates for at least five years. The real draw, however, is the price. It starts at Rs42,500. Of course, corners have been cut, such as the dated design (it looks like the 2017 iPhone 8), the inferior display and an inferior camera system. But none of these is a deal-breaker.

The OnePlus 8 Pro, on the other hand, is a proper flagship. It comes with arguably the best screen on a mobile phone, the latest Snapdragon chip, lots of memory and all the bells and whistles. At 054,999, it is also the most expensive OnePlus phone ever. While there is no doubt that the OnePlus 8 Pro is worth every penny you pay for it, your penny was worth a lot more when you bought the OnePlus 7T Pro or the OnePlus 7 Pro.

That makes a strong case for choosing Apple’s flagship killer. Not just over the OnePlus 8 Pro, but over any flagship.