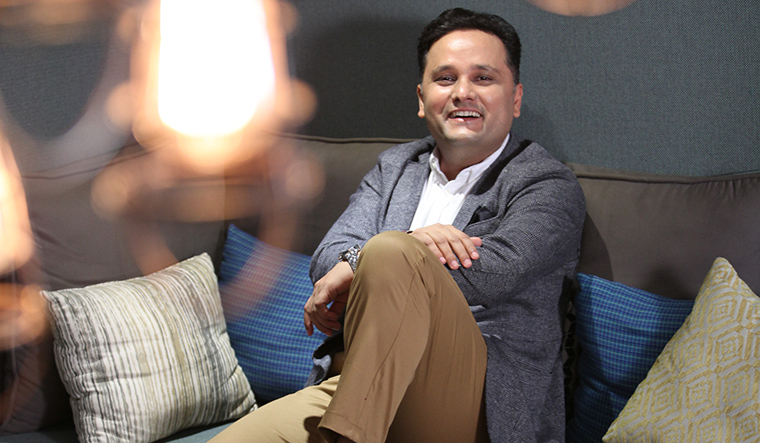 On a beautiful spring day in Mayfair, the most desirable neighbourhood even in Monopoly, one can see the silhouette of many mansions and a lovely park from writer Amish Tripathi’s window. He has much time to admire it, as he is now on the fourth day of self-isolation. India’s most famous writer of mythology has added another feather to his cap—he is now a diplomat. The newly-appointed director of the Nehru Centre—the cultural wing of the Indian High Commission in London—has high ambitions for it. He wants to make it the city’s cultural centre. The past few days have been hectic for him—reading, coordinating with staff, and getting used to self-isolation.

“The problem is that we are not noticed much,’’ he says over the phone. “You almost never see India on the front page of a mainstream British newspaper culturally. We are not discussed.”

The Nehru Centre has become a little more political over the last few months. Apart from the usual dance and exhibition fare, in October, a play by Kashmiri Pandits, titled We Remember, was organised. Tripathi also launched a global dialogue series with Ashok Malik, adviser to the ministry of external affairs. It was a packed audience of some of the brightest British minds. “Most of our events have largely had an Indian audience,” he says. “There is this perception that the Nehru Centre is becoming a ghetto rather than a cultural outpost, and that we only talk to ourselves.”

Over the years, many Indian intellectuals have led the centre—like director and writer Girish Karnad, former governor Gopalkrishna Gandhi, and diplomat-turned-politician Pavan Varma. Tripathi was carefully selected by the BJP to change India’s image in the western world. “London is one of the key cultural drivers of the anglosphere,” he says. “And the anglosphere is the cultural driver of the entire world.”

Tripathi has turned Indian mythology into racy, mass market books. Those who consume his books are younger, restless, usually addicted to their phones, and not necessarily compulsive readers. They are also aspirational Indians, very much the vote bank that the BJP wants to woo. If Akshay Kumar represents a certain Indian value in Bollywood, Amish represents one in the world of publishing that is a perfect balance of modernity and tradition. Where Kumar embraces an over-the-top, pious patriotism, Tripathi goes for one that is earnest and influenced by his modern education.

At the Global Soft Power Summit in London last month, Tripathi was the only Indian speaker. “India’s soft power ranking was 27,” he says. “This was an improvement. It was one of the first surveys on soft power in which India made it to the top 30. Frankly, it is low for an economy of our size.” 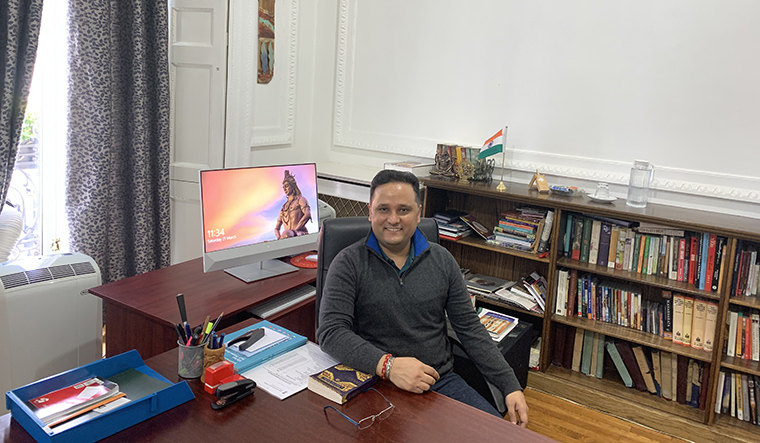 Culture peddler: Tripathi at his office at the Nehru Centre

In the last decade since Tripathi emerged as a pioneer of the mythological genre, India has changed a lot. With the Modi wave, there is a surge of nationalism. And Tripathi aptly represents the image that India wants to project. “My family would be classified as Dhartiputra,’’ he says, referring to an article he wrote about the fight between the traditional Dhartiputras, or sons of the soil, and the elite Macaulayputras in the country. “My parents were educated in Hindi medium [schools]. At home, I still speak Hindi. My grandfather was a pandit at the Kashi Vishwanath temple in Banaras and a teacher at the Banaras Hindu University. But my parents were also very clear that they wanted their children to do well in life, which, when we were growing up, meant getting an English education at a convent school.”

Polite, a word he often uses to describe himself, is an apt one. “I don’t think I add to the noise,” he says. Instead, he lets his work speak. His books have been runaway successes—the kind that are almost mythical themselves—and have sold over five million copies. His Shiva trilogy has been the fastest selling in publishing history. Tripathi’s story of being rejected by all the publishing houses is itself the stuff of myth. His journey began in a car—his first book, and most of his second, were written in the one-and-a-half hours it took him to get to work each day. And now, it will take self-isolation to get him to write. He says he has written only one chapter of the fourth installment of his Ram Chandra series, about the lives of Ram, Sita and Raavan. Its release is at least a year away.

“For various personal reasons, I wanted a break from Mumbai and this serves that purpose,’’ he says about his appointment. A few days ago, Tripathi, who guards his privacy fiercely, tweeted about his divorce. With “sadness and humility”, he announced that his 20-year marriage with wife Preeti Vyas was over. “The primary concern for both Preeti and me will remain our young son, Neel,’’ he tweeted. “I will continue to respect Preeti as a wonderful mother to our son and a good friend to me.’’

Can he turn things around? He has not been the first person to be tasked with “raising the profile of the Nehru Centre’’, as he puts it. His biggest challenge, however, is different. It is all the socialising he has to do as a diplomat. Tripathi has been a draw at literary festivals, but can hardly ever be seen at a party. “One of the benefits of [living in] London is that most parties, unless you are going to the crazy ones, end at 11pm,’’ he says. “I need to hit the sack by that time. I cannot stay up all night.’’