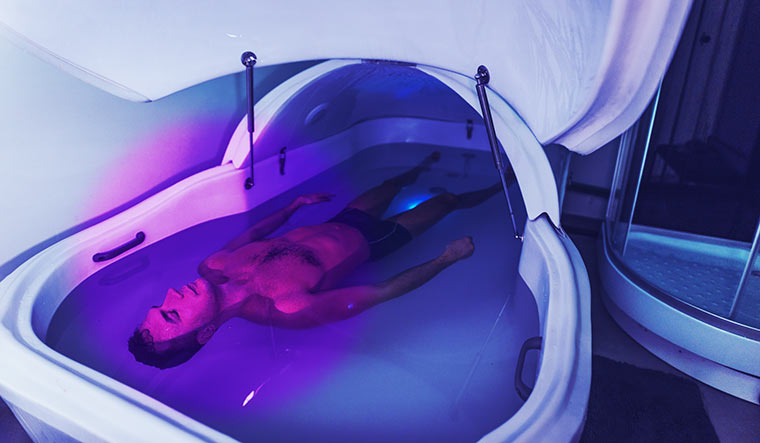 One does not casually pitch sensory deprivation as a fun recreational activity, especially not on a first date with a serendipitous Tinder match. The name itself suggests horror, and describing it will likely make your date flee.

It happens in a sensory deprivation tank filled with salt water kept at body temperature. The tank is sealed to keep out light and sound. As you float, you slowly lose all sensation. And, after a while, you become a single, unfixed point of consciousness, seemingly floating in nothing. Perhaps you might even lose your sense of self.

It sounds terrifying to some, but the result is assuredly soothing. There are two kinds of people who enjoy sensory deprivation—those for whom an hour-long nap in the tank is equivalent to a regular eight-hour snooze, and those who see it as a means of reaching a higher meditative state.

Some big names do swear by it. Scientist Richard Feynman did it hoping to experience hallucinations, while John Lennon reportedly tried to kick a heroin habit with it and chef Anthony Bourdain used it to help his crew unwind. In ancient times, Tibetan Buddhists of the Dzogchen tradition used ‘dark retreats’ devoid of light to prepare for death and rebirth.

Though the idea is becoming increasingly popular, floatation centres are still rare. I was lucky enough to find the Float Hanoi, which had a well-built floatation tank. It charged 600,000 dong (Rs1,888) for an hour of sensory deprivation. There, I was greeted by a calm, long-haired man named Chu Hoang Minh. While most people import floatation tanks, usually from the US, Minh built his own, intrigued by one he saw in Thailand.

He describes himself as “a bit of a hippie” who wanted to explore questions of consciousness. To him, floating was initially a “substance-free method of alternating the mind” alongside meditation. He now describes it as “assisted meditation therapy”. “Meditation is mental training, and floating is a way to do it with a tool,” he says. “The float tank is merely a tool that provides a specialised environment for meditation.”

Before I could dip in, Minh gave me a word of advice—if I wanted to meditate, I should focus less on my breathing and more on the rocking motion of the water. Once inside, darkness enveloped me as I floated effortlessly in the saline solution. I felt nothing after my body acclimatised to the water temperature. Soon, it felt like floating in space.

The promise of a super-satisfying rest was more than fulfilled, but I also meditated like I had never done before. Time felt arbitrary inside the tank, and when I had to get out, I felt like I was emerging from a dream. It was more pensive than hours of meditation, more relaxing than a long nap, and more novel than most things I have done.

And all this for less than the price of a dinner for two.