Pre-wedding shoots in Kerala are getting increasingly creative 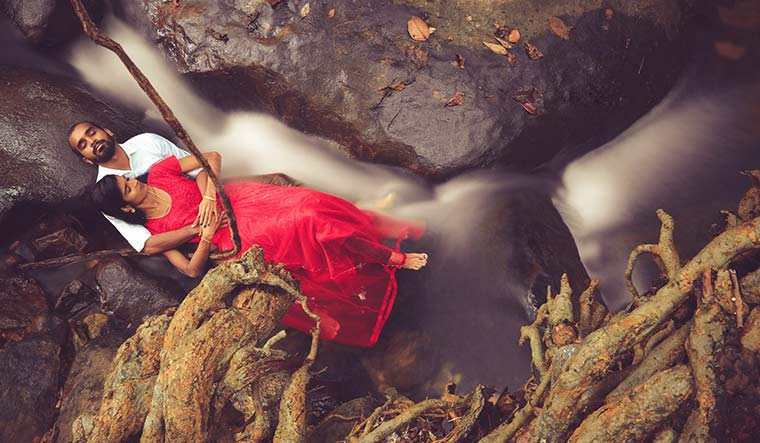 Pre-wedding shoot of Abhijith and Saranya in Ponmudi | Shadow Frames

The scene is the terrace of a house in Aluva, in suburban Kochi. Some youth are fast asleep on straw mats when the phone starts ringing. The caller is ‘DADDY’. When Jibin, half-awake, picks it up, his angry father asks him why he is not up yet. “A girl is coming to see you at 10am at a café in Perumbavoor (some 30 minutes away),” he tells Jibin. “Her name is Rose. She has your picture. She will find you.” Jibin shakes his friends awake and all of them head to the café.

The next scene is shot in the café. A girl in a rose kurta is sitting inside.

“Is Rose the girl’s name or the colour of her dress?” a friend asks Jibin.

“I am not sure,” says Jibin. He decides to risk it and makes his way to her table.

“On time for what?” asks the girl.

“Didn’t you come to see me?” asks Jibin.

“See you? What do you mean, mister?” asks the girl. Her husband arrives and things start hotting up.

Meanwhile, the real Rose walks in and watches the unfolding drama. She taps Jibin on the shoulder and delivers the punch-line. “Just wearing a rose dress will not make you a rose.”

The last scene is of the friends, in the traditional Kerala attire of mundu and white shirt, walking in slow motion to a track from the Malayalam movie Aadu 2. “SAVE THE DATE,” flashes across the screen. “Jibin weds Rose, January 28, 2018.” 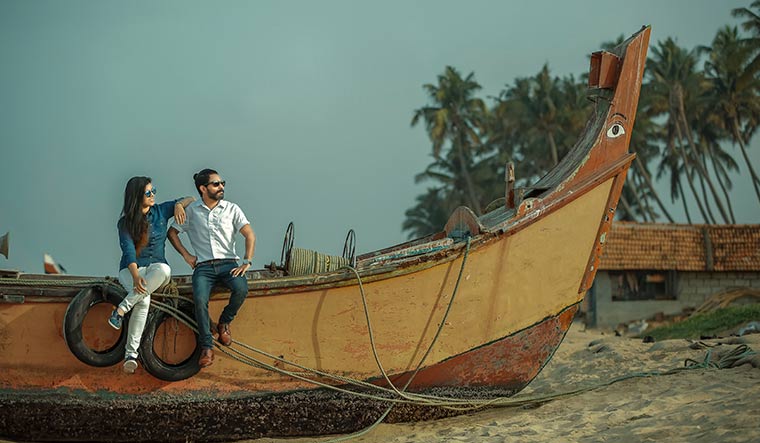 According to Jibin Joy, a service manager at Volkswagen and the protagonist of the shoot, his childhood friends organised everything. “We studied together and are very close,” he says. “I was the first one to get married among them and so they wanted to do something creative. We stayed over at a friend’s house the night before the terrace scene was shot. The next day, all of us took leave from work. The entire photo-shoot was done in a day. The script was written by my brother. A couple of friends from Dubai did the editing. The mundu that we wore in the last scene was designed by a friend and stitched by my aunt. The girl in the café is Rose’s sister. We practised for a few hours and dubbed the video before doing the shoot. My friends worked really hard to make this happen.”

Such innovative pre-wedding shoots are becoming increasingly popular in Kerala. Although such shoots are happening across the country, the state is especially known for its cinematic shoots with elaborate plots. There are dozens of them on YouTube shot by photography studios like Convex Video, Basil Clap Media, Shadow Frames and countless others. Many of the videos go viral on social media, which, mostly, is why they are made. Jibin’s video got over 91,000 views on YouTube.

“It had got over 3.5 lakh views on Facebook,” says Amal K. Sudhan of Memory Makers Wedding, who shot it. “But there were some copyright issues over the song from Aadu 2. So we had to take it down.” According to him, the trend started in 2015 on a small scale, when couples used to take short selfie videos and post them on social media. Later, it snowballed into the phenomenon that it is now. Sudhan has done over 50 such ‘save the date’ videos in the last four years. He charged Jibin and Rose Rs2.5 lakh for the entire package, which included ‘save the date’, engagement, wedding and post-wedding shoots. He is now headed to the International Film Festival of Kerala (IFFK) in Thiruvananthapuram. “I attend such festivals so that I get [cinematic] ideas for wedding shoots,” he says. In fact, many of these shoots make film references and use songs from popular Malayalam movies. There are many make-believe scenes created which could be straight out of a Mollywood masala movie—a landlady who terrorises her workers sees a ferryman from afar and falls in love with him. A motorcyclist rescues a damsel being heckled by a few men and it is love at first sight. A female doctor is wandering in the woods when she meets an injured photographer. While bandaging his elbow, their eyes meet and love blossoms.

Anand Ashok, the injured photographer in the video, is an electronics engineer in Doha and his wife, Reshmi P. Nair, is doing her postgraduation in medicine. “I was unsure whether to do the video or not,” he says. “Reshmi is very shy and I am the more serious type. But last year, my sister had done a similar ‘save the date’ shoot for her wedding, in which her car broke down and my brother-in-law came and fixed it. That was appreciated by many family members. Then I thought to myself that such videos are going to be the future. If we do not make one, I do not want to regret it later.” The shoot was done near Thodupuzha, an hour from Kochi, and took around six hours. The stressful part, he says, was the acting. The rest was manageable. The entire wedding photography by Pixel World Studio cost him Rs1.5 lakh.

Vishnu L.S. of Shadow Frames Wedding Photography says that earlier, the trend was for traditional Kerala wedding shoots, but now, story-based shoots are becoming popular. On an average, he charges Rs60,000 for two videos and a wedding album, which includes a mini book and wall and table calendars. Usually, there is a team of two to three photographers per shoot. Vishnu uses various techniques—such as making a hole in a banana leaf so that water drips on to the face of the bride, creating fake rain with a hose pipe, using heli-cams for aerial pictures and spotlights for an interplay of shadow and light, and splashing water on the couple seated in a traditional boat. “This mainly depends on the timing,” he says. “It is taken with low shutter [speed] while holding the camera steady.”

One of Vishnu’s simpler pre-wedding videos was of Soumya Gopinathan and Manu Soloman, shot on a beautiful beach. Although there was no story-line, it was still very filmy—with slow-motion shots of Manu chasing Soumya; the couple posing with arms outstretched, Titanic-like; and high-fiving each other from the rocks by the coastline. “We wanted things to be very simple,” says Soumya. “I was not sure of the running scene because we are both on the heavier side. But [the photo team] told us it would be good exercise for us. They gave us enough freedom to do things the way we wanted. Although it was so blinding hot that we could hardly look at each other, still the shoot turned out to be fun.”