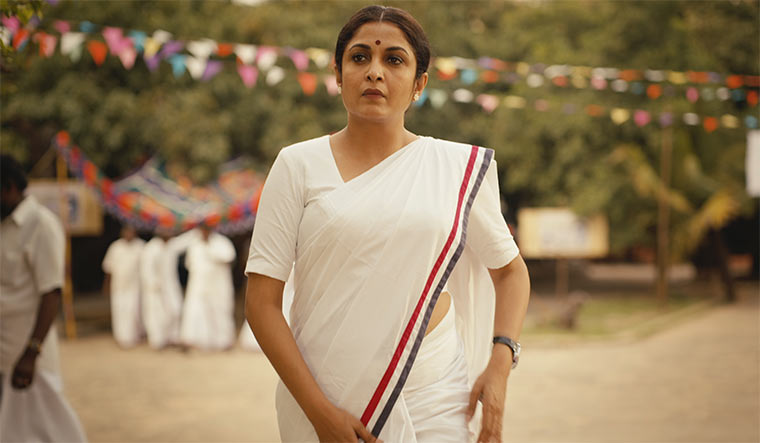 In the making for more than a year now, Queen, inspired by the life of J. Jayalalithaa, will stream soon on MX Player. Even as the trailer of the show has set social media abuzz, Jayalalithaa’s niece has filed a case against everyone involved in making a biopic on her aunt. Ramya Krishnan, who plays the character inspired by the late actor-turned-politician in Queen, talks to THE WEEK about the show.

Q/ What fascinated you about Queen?

A/ Gautham [Vasudev Menon, director] had approached me with this script last year, around June. I thought the strength of the character and her journey were wonderful. Shakti Sheshadri, my character, is forced into [an acting career]. Though a reluctant actress, she gives it her best and excels. Similarly, although pushed into it, she excels in politics as well. As a woman in a man’s world, her story is unbelievable. Any woman would want to be part of a story like hers—with her power, her control over everybody and how she proved the men wrong.

Q/ How relatable was this character for you?

A/ I could relate to it so much. Most women face too many hurdles [in life]. And each time they come out of it, they are stronger than before. The best part of the show is how this person with a larger-than-life image has vulnerable moments, when she is just a woman of simple needs and attributes.

Q/ There are many similarities between Shakti and Jayalalithaa.

A/ Basically, the show is inspired by Anita Sivakumaran’s book, The Queen, which is based on true incidents. If you find similarities, which you may… that is all I can say.

Q/ Did you reference Jayalalithaa’s life while preparing for the role?

A/ No, I did not. Gautham wanted me to have my own process to prepare for the role.

Q/ Queen is being pitted against Thalaivi, starring Kangana Ranaut as Jayalalithaa.

A/ It always happens. It does not bother me. One has to get used to it. You have to decide which film is better and which narration is better [before you choose a project].