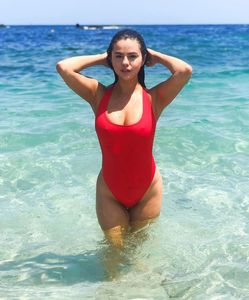 Some people might remember Baywatch, the television drama that ran through the 1990s, for its shark attacks and earthquakes. Others might remember it for its cheesy dialogues and sizzling affairs. But no one can forget Pamela Anderson in her iconic, red, one-piece swimsuit, running in slow-motion on the beach, the wind whipping golden strands of her hair across her face. Who cared about the poor bugger she was running to save? At the pace at which she ran, he would have had become shark meat long ago.

The sexy red one-piece has stood the test of time. Recently, several stars like Hailey Beiber, Jennifer Lopez and Ashley Graham were spotted in Baywatch suits. Selena Gomez was rocking the look during her vacation in Punta Mita, Mexico. Kylie Jenner and Khloe Kardashian, too, were seen sporting it.

Of course, no celeb today can pull it off the way Anderson did. And guess what? She says she still fits into the one-piece that she wore more than two decades ago. And she wears it from time to time to “surprise her dates”. “I jump in the shower with a bathing suit and then jump on them (her dates) wherever they are in the house, soaking wet,” she recently said. Not sure whether that is sexy or creepy.