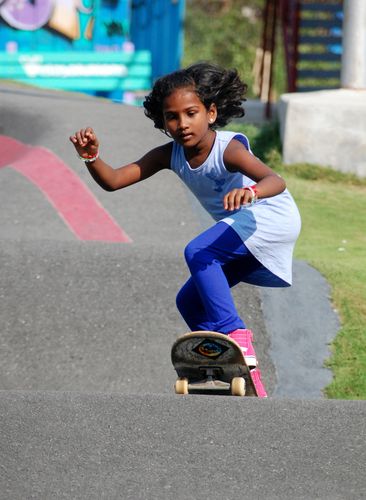 Three years ago, I visited the sleepy town of Mahabalipuram in Tamil Nadu to write a feature on the fishermen there who have started surf schools. Although it was not peak season, a few surfers speckled the ocean, framed against an azure sky. Later, Aine Edwards, the Irish surfer who accompanied me, took me to a frock-clad girl with tangled hair and a smile that transformed her face. Her name was Kamali Moorthy and she was six years old. She was perhaps the youngest surfer and only girl skateboarder in her village. Edwards asked her whether she wanted to demonstrate her skill with a surfboard. She took us to her quarters—a cramped, dimly-lit space which she shared with her mother, Suganthi, and her brother—and changed into a pink wetsuit. Wading into the ocean, she soon became a pink blur streaking across its frothy edge.

She is as skilled with a skateboard as she is with a surfboard. A few days after I met her, an American professional skateboarder, Jamie Thomas, met Kamali when he visited the town. He gave her a lesson in skateboarding that changed her life. In late 2016, Sasha Rainbow, a New Zealand-born filmmaker settled in London, came to India to shoot a music video for the British band, The Wild Beasts. As its theme, she wanted to film Indian female skateboarders. She had seen a picture that Thomas had taken of Kamali on a skateboard, and knew she wanted the young girl to be part of the video. For the first time in their lives, Kamali and Suganthi travelled outside their village in Mahabalipuram to Bengaluru to meet Rainbow. The filmmaker took the girl to skateboard at the biggest skate park she had been to until then. “She had never seen anything so incredible,” says Rainbow. “She just started skating around everywhere. We were very tired that day, but watching her really energised us.” 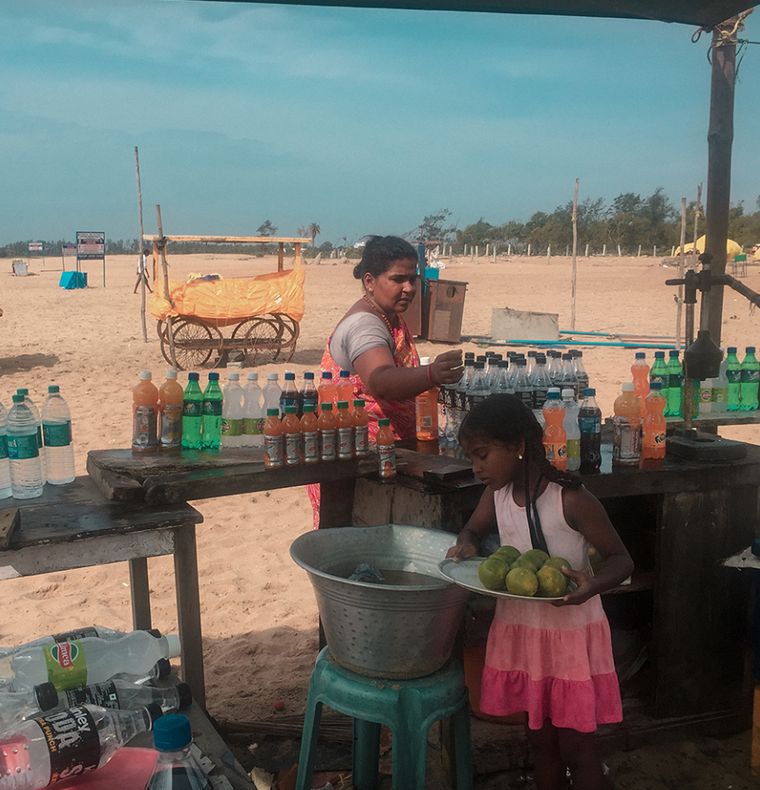 Life lessons: Kamali with Suganthi at the shop they own in Mahabalipuram.

After interacting with Suganthi and Kamali, Rainbow knew she wanted to film the story of this young girl from a nondescript village in Tamil Nadu, whose skateboard symbolised a childhood unblemished by concerns of gender, caste or economic status. On her slim shoulders, she carried the weight of hope, not just of her own future, but that of an entire nation. “I felt this was the perfect story to represent what was happening in India,” says Rainbow.

Jamie Thomas gives her a lesson in skateboarding.

“My arms are not long enough to tell you how much I love skateboarding,” Kamali once told Edwards. “It lets me forget everything, feel free... like I am flying.” 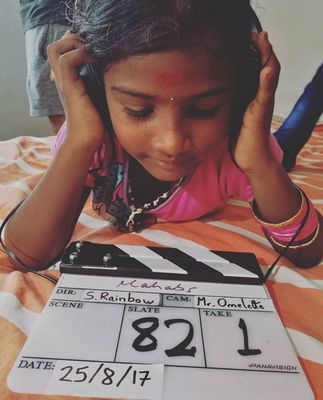 During the shooting of the film.

After making the music video, Rainbow went back to London. A year later, she returned to shoot the documentary, staying for a month in Mahabalipuram and following the daily lives of Kamali and her mother. The 24-minute short film won the award for best director at the Mumbai International Short Film Festival 2018. It also won the best documentary award at the Atlanta Film Festival, qualifying for the 2020 Oscars. “Kamali was so confident that the film would win awards at both festivals,” says Edwards. “She was waiting to win the best actress award in Mumbai. I explained to her that she was not an actress in the film, and that it was a documentary.”

But the film is as much about Kamali’s mother Suganthi as it is about Kamali. Suganthi was locked away as a child, until the day she got married. She was then in an abusive relationship from which she mustered the courage to walk away. The film focuses on Suganthi’s determination to let her daughter follow her dreams, no matter what it cost her. In the trailer of the film, Kamali is seen twirling in the shower, marching across her school campus in her uniform, skateboarding down the narrow lanes of her village. There is an effervescence about her that is captivating. “If my marriage had gone well, I would have kept Kamali locked away at home like I was,” says Suganthi in the trailer. “Married off to a man at 17. My girl mustn’t grow up like that. Lots of people look at Kamali skateboarding and say, who will marry her if she breaks. I want to tell my precious little Kamali one thing: Never be afraid.”