Nothing to be excited about': Rajiv Gandhi case accused Nalini after release 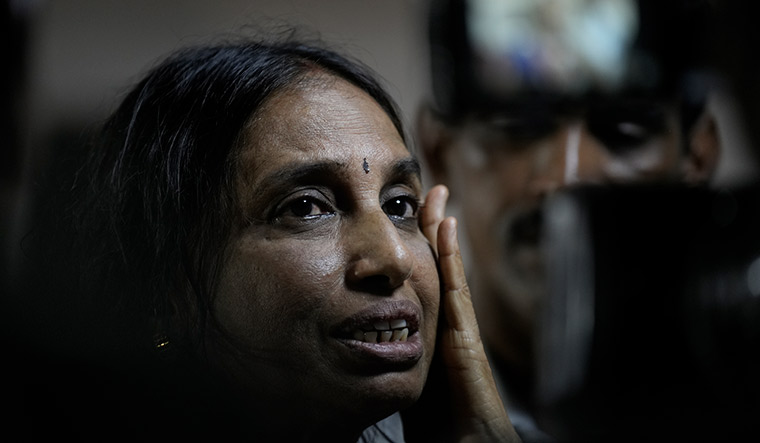 NALINI SRIHARAN WAS 26 when she was arrested in the Rajiv Gandhi assassination case. She spent 31 years behind bars, making her India’s longest-serving woman prisoner, before she was released on November 12 on the orders of the Supreme Court. Five more life convicts–Nalini’s husband, Murugan alias Sriharan, R.P. Ravichandran, Santhan, Robert Payas and Jayakumar–were released along with her. As she stepped out of Tamil Nadu’s Vellore prison, she looked pale and disturbed. Seeing Murugan inside a police van, she walked up to him and held his hand through the van’s grilled window and talked to him.

Nalini said she did not feel much happy about her release. “What is there to be excited about? My husband and I want to go to the UK. We want to live with our daughter,” Nalini told THE WEEK. Their daughter, Harithra, is a doctor based in London. “She is a [permanent resident] and has assured that she will make all arrangements for us. I request the government to release my husband from the special camp,” said Nalini. Murugan, being a Sri Lankan national, is lodged at a special camp for foreign refugees in Tiruchirappalli. Other Sri Lankans released with him–Santhan, Payas and Jayakumar–are also at the same camp. “The government can allow them to travel by helping them get passports,” said Nalini’s lawyer Ananda Selvan.

Nalini, Murugan and 24 others were sentenced by a Chennai court in 1998 under the Terrorism and Disruptive Activities (Prevention) Act, after finding them guilty in the Rajiv Gandhi assassination case. The Liberation Tigers of Tamil Eelam (LTTE) targeted Rajiv for sending the Indian Army to fight its guerillas in the Sri Lankan civil war. He was killed in a suicide bomb attack while attending an election rally at Sri Perumbudur near Chennai on May 21, 1991. Nalini, a graduate in English language and literature from Chennai’s Ethiraj College, was tasked with acting as a cover for the designated suicide bomber, Dhanu, and the backup bomber, Subha. She was indoctrinated by Murugan, whom she married later at the Tirupati temple amid heightened search operations following the assassination. The couple was arrested from Chennai on June 14, 1991. Nalini was pregnant at the time of the arrest and gave birth to Harithra, while in jail.

Harithra initially grew up in jail with her mother, but was later taken to Sri Lanka and then to the UK by Murugan’s parents. “I cannot even recall those days inside the prison. It was like solitary confinement,” said Nalini. Murugan’s mother, who used to visit him and Nalini in prison, is unwell and is no longer able to travel. “The government should allow us to go and meet everyone,” said Nalini. “But my husband will not go to live in Sri Lanka. We want to be with our daughter.”

Nalini said she spent most of her time in jail studying and reading. She passed her MCA exams with distinction and has another master’s degree as well. She holds diplomas in fashion design, tailoring, home science, craft, first aid and yoga. Some of her favourite books include A.P.J. Abdul Kalam’s Wings of Fire and Nelson Mandela’s Long Walk to Freedom. “I read all the five volumes of Ponniyin Selvan. I was quite stressed after finishing my MCA exams. The five volumes of Ponniyin Selvan gave me relief,” said Nalini. “My family used to get me the books I wanted. There was a person called Perumal who brought those books to prison. The books kept me alive inside the prison.”

The trauma of spending such a long time in prison haunts Nalini. Not much help was forthcoming for her inside the prison, although she shared her worries with a few people whom she believed would help her. “The people whom I trusted cheated me. I cannot trust anyone now,” she said.

For Nalini, the only memorable moment during the three decades she spent in prison was the visit by Rajiv Gandhi’s daughter, Priyanka Gandhi Vadra. But she has not been willing to speak much about the visit. Her memoir compiled by journalist Egalaivan explains how she tried to convince Priyanka about her innocence. “Neither me nor my husband was aware of the conspiracy,” said Nalini in the memoir. “It was only a few minutes before the bomb blast that I told my husband that I was pregnant. He lifted me in joy and danced. We even discussed names for the baby.”

While Priyanka’s visit was the obvious high point for Nalini, she did not feel quite happy when her death sentence was commuted to life imprisonment by Tamil Nadu governor Fathima Beevi in 2000. She was unhappy because her comrades still faced death penalty. “All along, we were seven convicts (In 1999, the Supreme Court sentenced four of them to death and three to life terms). And three were still facing death row. How could I feel happy about that?” she asked.

Things started changing from 2014 when the Supreme Court commuted the life sentences of the remaining three. “Then came the resolutions brought in the assembly by chief ministers J. Jayalalithaa and Edappadi Palaniswami,” she said. “And now, the efforts by Chief Minister M.K. Stalin has helped us walk out of jail free.”