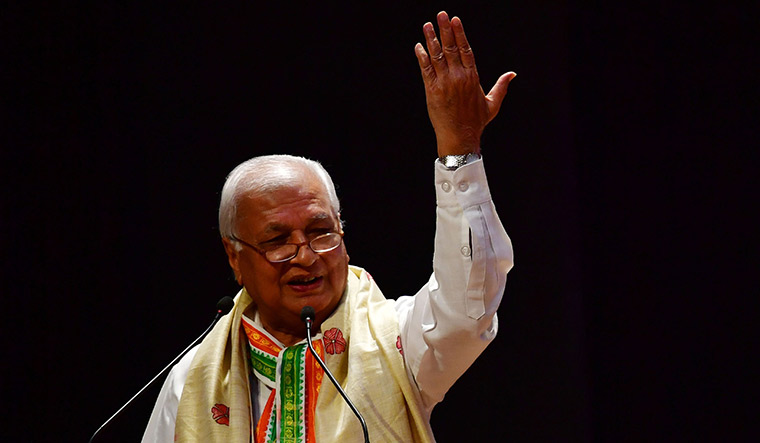 As the tussle between the governor and the government continues, the Pinarayi Vijayan cabinet removed Governor Arif Mohammad Khan as chancellor of Kerala Kalamandalam, deemed to be university, amending the rules of the institution. The ruling Left Democratic Front plans to replace Khan as chancellor of all state universities, as well. An ordinance to this effect was sent to the Raj Bhavan on November 12. As the governor is unlikely to clear the ordinance, the government is proceeding with the unusual move of convening an assembly session in December to pass a bill to that end.

Law Minister P. Rajeev said that even if the governor kicked the ordinance upstairs to the president, there were no legal obstacles in passing the bill in the assembly. If an assembly session is convened in December, the government will also be able to avoid the governor’s customary policy address to the house in early 2023.

The LDF is also trying to ramp up political pressure against Khan. Under the banner of a non-political forum called Vidyabhyasa Samrakshana Koottayma (Save Education Forum), the front on November 15 organised a massive rally outside the Raj Bhavan, accusing the governor of acting against Kerala’s interests. The government, however, faced a major setback after the Kerala High Court quashed the appointment of K. Riji John as vice chancellor of Kerala University of Fisheries and Ocean Studies, citing procedural violations. The verdict would strengthen the governor’s position that there has been executive interference in the matters of state universities.

In an exclusive interview with THE WEEK, Khan said the Pinarayi Vijayan government wanted unrestrained freedom to appoint unqualified and under-qualified relatives of CPI(M) cadres to various positions in universities. He warned that if the universities were not allowed to function normally, it would be the beginning of the collapse of constitutional machinery in the state.

Q/ The CPI(M) leadership supports the Kerala government’s move to remove you from the post of chancellor of state universities. Why do you think it is important that you stay in this statutory post?

A/ It is not correct to say that ‘I think it is important that I should stay as chancellor of universities’. I have never nursed such perceptions. For me, institutions are much more important than individuals. There is nobody who is indispensable as the saying goes: “The graveyards are filled with men the world could not get on without.”

When the state government, armed with the opinion of the advocate general, forced me to reappoint the vice chancellor of Kannur University against my own better judgment, I wished to be relieved of the duties of chancellorship, apprehending that they will continue to force me to do such things in future.

It was then that I wrote to the chief minister and requested him to make alternative statutory arrangements as I found it unacceptable to be used by the government to subvert the law and regulations to install under-qualified people to serve their political purposes. But the government soon realised that executive interference in universities will not be acceptable to the academic world and the UGC, on which they depend heavily for financial assistance. Therefore, the chief minister wrote letter after letter and finally―when they gave an unqualified written assurance that the government will not interfere in the matter of universities―I agreed to resume my duties as chancellor.

What I am not able to understand is why they are always [making] threats? Why don’t they go ahead and pass a bill in the assembly and make new arrangements as they deem fit. They know their limitations, but, for the CPI(M), violence and pressure tactics are part of their political belief, so they continue this tirade.

I can assure you that if they remove the governor from the position of chancellor, I shall not come in their way. I shall not try to be judge in my own case. But keeping in mind the recent judgments of the honourable Supreme Court, wherein it has been made crystal clear that the state government has no role in the appointment of the vice chancellors in the light of UGC regulations, I shall refer any such bill, if passed by the assembly, to the honourable president for her consideration and final decision.

Q/ The Pinarayi Vijayan government is trying to project your actions as being against the people of Kerala. Do you think the LDF is using the people as a shield against you?

A/ We are a democracy and freedom of expression includes freedom of propaganda which often is not based on truth. I do not wish to join issue with them. What I am doing is performing my duties as enshrined in the oath I have taken and that is to protect, preserve and defend the Constitution and law, and serve the interests of the people of Kerala.

Their idea to “protect the higher education domain” is to have the unrestrained freedom to appoint the unqualified and under-qualified relatives in various positions in the universities. Any government is oath-bound to ensure equality before law and equal protection of laws. Do you have any idea about the number of cases where appointments to various posts have been challenged on the ground of political favouritism and nepotism?

I do not hold an elected post, then why do you need to mobilise people against Raj Bhavan? If I have breached any law, you can go to court; if I breach any propriety, go to the honourable president who has the power to discipline me. The need to go to people has arisen because now people of Kerala are asking whether all employment opportunities, right from universities to municipal corporations have been reserved for CPI(M) cadres. They are asking about personal staff of ministers becoming entitled to pension in two years time and each minister producing an army of 50 full time party workers who receive monthly salary in the form of pension. Never forget that even an Army man can avail the pension facilities only after completing ten years in service.

I feel ashamed that the main source of revenue in Kerala is liquor and lottery. It is the very poor who buy lottery tickets. Now people have also started seeing the connect between lottery and drugs. Some people who invest all their earnings in the lottery and win no prize become so desperate that they take to drugs.

Do not think that people can be deceived forever. They have started asking these questions, and the government cannot evade responsibility.

Q/ You said that the Kerala government has initiated a process that could lead to the collapse of constitutional machinery. Is it a sign that you would not even hesitate to recommend president’s rule?

A/ Are you not reading the statements of the chief minister and other leaders of the CPI(M)? Every day they use violent language. The chief minister has gone to the extent of saying that the governor will face dire consequences. In another statement, he alleged that the governor had started making preparations for alternative arrangements in the universities three days before the Supreme Court judgment. So you may guess what he is trying to say.

They are issuing threats that acting vice chancellors shall not be allowed to enter the campus. If the universities are denied autonomy and normal functioning, then it is the beginning of the collapse of constitutional machinery. My statement is nothing more than an advice to the chief minister not to indulge in lawlessness.

Q/ You mentioned that those who were appointed by you cannot criticise you. Do you think it is in line with democratic principles?

A/ First, I have not used the word “criticise”. What I said in my tweet was that if the ministers whom I have appointed on the advice of the chief minister try to lower the dignity of the office of governor, then I shall withdraw my pleasure. Secondly, it is not fair to equate ministers with any person or citizen. Criticism is the essence of democracy but certain discipline and respect for propriety is needed on the part of functionaries of the state.

I ask you whether your organisation will allow you to publicly criticise your editor. You will be shown the door. I disagreed with the prime minister in 1986, but before giving expression to my views, I resigned from the government. Can these ministers criticise the head of the government, that is the chief minister? No. Then how they become entitled to criticise the head of the state? Do not try to apply standards to me which your own organisation will not allow.

Q/ There is an observation from certain sections that this whole tussle has become personal for you.

A/ What do you mean by ‘personal’? I have no personal dispute with the chief minister. I am bound by my oath to ensure “rule of law” and not allow “the rule of the ruler”. It was my duty to stay the order appointing an under-qualified person in Kannur University and I did it. Now it is my duty to uphold the judgment of the honourable Supreme Court. The ruling of the highest court enjoys the same status as any law passed by Parliament. I am duty bound to apply the law as laid down by the honourable Supreme Court in the universities headed by me. For me, my personal likes or dislikes are immaterial, what is important is “be you ever so high, the law is above you”.