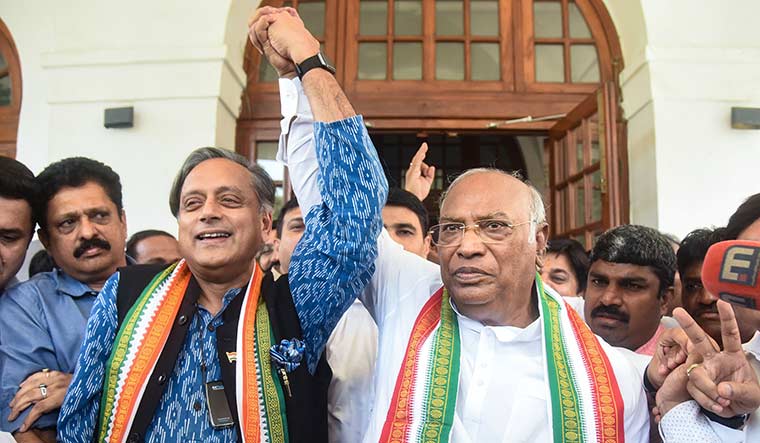 As the Bharat Jodo Yatra traversed Karnataka, veteran Congress leader Mallikarjun Kharge found himself in a tricky situation. As the senior-most leader in the state, Kharge was expected to walk with Congress president Sonia Gandhi as she briefly joined the padyatra led by her son Rahul Gandhi. But then, Kharge was also a candidate in the party’s much awaited presidential election, and his participation would raise questions about the Gandhi family’s poll neutrality.

As the election drew close, though, Kharge chose to not just walk with Rahul, but also take part in a public rally in Bellary to mark 1,000 kilometres of the yatra. The sight of Kharge walking with Rahul was telling―both in terms of the poll process and what lies ahead for the new Congress president. It depicted Kharge in sync with Rahul, and gave a glimpse of the role of the new party chief as regards Rahul, whose image as the face of the party in the run-up to the 2024 Lok Sabha polls is being burnished by the yatra.

The presidential election was the first to be held in the Congress since 2000. The party wanted it to be seen as depicting internal democracy, blunting allegations that the Gandhis wielded dynastic control over the organisation. Every step in the poll process felt new. Directives had to be issued by the party’s central election authority (CEA) about according the two candidates―the “status quoist” Kharge and the “anti-establishmentarian” Shashi Tharoor―the same kind of reception when they visited the states to campaign. But it was only to be expected that there would be a favourite who would get special treatment. In this case, it was Kharge.

Both the candidates undertook a hectic campaign, visiting state capitals, addressing news conferences, reaching out through social media, and listing out their agenda as party president. In the end, as many as 9,385 of 9,915 delegates cast their votes in 67 polling booths across the country. Kharge won 7,897 votes―6,825 more than Tharoor. There were 416 invalid votes.

Kharge’s victory was never in doubt―he had overwhelming support of most party leaders, including members of “G23”―the group of 23 senior leaders who have been demanding large-scale changes in the Congress. From the very start of the campaign, it was clear that Kharge was the choice of the Gandhis and the party establishment.

After 24 years, the Congress now has a non-Gandhi at the helm. Kharge is also the first dalit to become party president after Jagjivan Ram in 1970-71. The party would want this to be viewed as its commitment to the cause of the marginalised.

With his valiant and spirited campaign, Tharoor grew in stature and consolidated support for his reformist ideas. Although he often had to plough his own furrow, with even his G23 colleagues abandoning him, Tharoor managed to pull in as many as 1,072 votes. To put things in perspective, Jitendra Prasada got only 94 votes against Sonia Gandhi in 2000. Sharad Pawar and Rajesh Pilot got only 882 and 354 votes, respectively, against Sitaram Kesri in 1996. 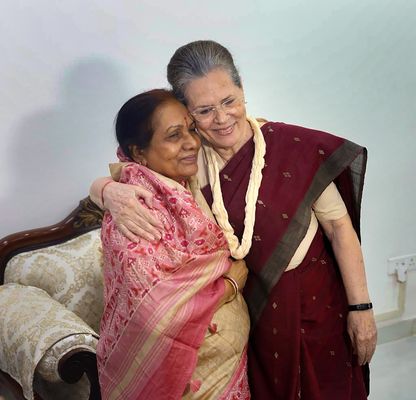 An acknowledgement of Tharoor’s heightened influence came during the middle of the campaign, when the Congress named him head of the parliamentary standing committee on chemicals and fertilisers. There is now speculation that he could be part of the new Congress Working Committee to be set up under Kharge. He may even be included in the team of working presidents or vice presidents that could be formed to assist the new president.

“I am thrilled with the result, and now there is an infusion of fresh blood in the grand old party,” Shashi Tharoor told THE WEEK. “The Congress is here to stay. Nobody should write us off. I will meet Kharge and offer him full support.”

The task for Kharge, 80, is cut out. He is the first full-time Congress president in three years, succeeding Sonia who has been at the helm since 1998, except for one and a half years between 2017 and 2019 when Rahul was party chief. With his vast experience in governance and the organisation, Kharge assumes charge at a time when the Congress is at its weakest. The party is reeling from a series of electoral setbacks and the relentless exodus of leaders.

Kharge’s immediate challenge: the assembly polls in Gujarat and Himachal Pradesh later this year. In Gujarat, the party is widely viewed as having frittered away the gains of the previous polls, in which it had won 77 of 182 seats. There has since been an exodus of leaders from the Congress, which now has to deal with an aggressive Aam Aadmi Party as well.

In Himachal Pradesh, the Congress is struggling to get over internal differences to take advantage of the anti-incumbency against the ruling BJP. Its most respected leader, Virbhadra Singh, died last year, and the party is unable to project a new face because of internal power tussles.

If the party performs poorly in the two states, Kharge and the Congress would start on the back foot in 2023―an electorally crucial year. Polls are due next year in Karnataka, Rajasthan, Madhya Pradesh and Chhattisgarh―states where the Congress and the BJP will have direct fights. The outcome will have a bearing on the Congress’s preparations for the Lok Sabha polls in 2024.

Kharge has been cautious in dealing with demands for an overhaul in the party, saying he would consult all senior leaders, including the Gandhis, before deciding on what needs to be done. He has said that he remains committed to implementing the Udaipur declaration on reforms, which was adopted after the party’s brainstorming conclave held earlier this year.

“Kharge has the kind of experience that is required to run a party like the Congress,” said senior Congress leader Ambika Soni. “He has held various posts in his long political career. He has been a legislator, leader of opposition and cabinet minister. He inspires confidence and has the ability to take everyone along.”

Providing the party with ideological clarity would be another challenge. The panel headed by Kharge at the Udaipur conclave had proposed that the Congress reaffirm its commitment to the Constitution, protect India’s federal structure, empower the downtrodden, and ensure liberty of thought, expression, belief, faith and worship.

“The BJP is moving on the same path of oppression that the British trod earlier,” said Congress leader and Rajya Sabha member Pramod Tiwari. “We firmly believe that Kharge can give a befitting reply to the BJP-RSS ideology. I have witnessed in the Rajya Sabha how he roars like a lion when taking on the ruling side.”

A big question is, what would be the role of the Gandhis from now on? It is widely believed that the Gandhis will continue to greatly influence decision-making in the party. Also, Rahul is expected to be the face of the party in the Lok Sabha polls. Congress leaders have also pointed out that Kharge has an excellent rapport with Rahul.

“The Gandhi family’s contribution to the nation and the party is unparalleled,” said AICC treasurer Pawan Kumar Bansal. “We cannot forget the sacrifices that they have made for the country. Sonia Gandhi did not want to continue as party president. And we all urged Rahul Gandhi to come back as party president, but he said a firm no. Now, we have reposed our faith in a person with immense experience.”

Perhaps, one can read into the enthusiasm of a group of drummers who gathered at the Congress headquarters in Delhi after the results were out. They celebrated Kharge’s victory by chanting Rahul’s name. Apparently, many of the invalid votes involved the delegates writing the name of Rahul on voter slips. The message being drummed home: Kharge may be the new party president, but Rahul continues to have an overarching presence.