It has re-energised Congress in the poll-bound state 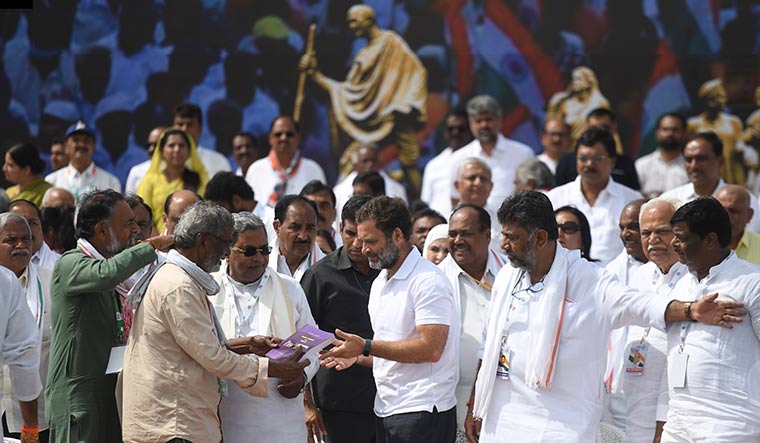 AT NOON, a sprawling camp dotted with white canopies in Jajirakallu village in Andhra Pradesh transforms into an oasis for the sun-tanned Bharat Jodo yatris who are back after walking 13km in the blazing sun. They look fatigued, but are in an upbeat mood. After savouring a sumptuous meal served on a plantain leaf, they retire into a giant tent for a power nap. Small teams of volunteers huddle together sharing notes, while the movers and shakers carefully factor in the rising mercury and logistics to revise the schedules. A team of doctors suggests quick fixes for minor ailments.

The evening is ushered in by the beating of drums; folk artistes engage the teeming crowd, while the yatris line up once again to hit the road. Former Congress president Rahul Gandhi, who is leading the Bharat Jodo Yatra from Kanyakumari to Kashmir, steps out of the camp and his security cordon struggles to keep pace as he greets cheering crowds on either side of the road.

The yatra, which was flagged off on September 7, completed the 1,000-km mark at Ballari in Karnataka on October 16. While the yatra is perceived as a bid to resurrect the Congress ahead of the 2024 Lok Sabha polls, and perhaps to project Rahul as the prime ministerial candidate, it has led to a lot of intrigue in Karnataka, which goes to polls in seven months.

The Karnataka leg of the yatra put the organisational strength of the grand old party’s state unit to test, but it also re-energised party cadres. The ruling BJP, which is battling anti-incumbency, is visibly shaken. It is not just the huge turnout that is giving the saffron party sleepless nights, but Rahul’s new avatar as a leader who is both affable and assertive, and his instant connect with the common man.

When the yatra entered the state through Chamarajanagar, one of Karnataka’s backward districts, Rahul met the families of Covid victims awaiting compensation. At Badanavalu village, where Mahatma Gandhi set up a khadi centre in 1927, he said the yatra would fight the ideology that killed Gandhi and would “unite the people” of the country. Symbolically, he helped lay a road to connect Badanavalu’s dalit quarter to its Lingayat locality to end the decades-old animosity between the two communities. In March 1993, three dalits were murdered by a mob of Lingayats over dalits entering the village temple.

With the yatra gaining momentum, Rahul met sanitation workers, tribal women and unemployed youth, farmers, fisher folk, construction workers, environmentalists, activists, teachers, educationists, artists, writers, journalists and intellectuals. He also took aim at the economic situation. “The massive concentration of wealth with a few individuals is destroying the backbone of the Indian economy­ ―the farmers and the small and medium business. This is resulting in the collapse of employment in India. And there is continuous and unrelenting increase in prices of commodities,” said Rahul. Youth Congress president B.V. Srinivas said the response to the yatra had been tremendous. “Not just the party workers, but the common man, too, is rushing to meet Rahul ji,” he said.

Even as the Congress upped its ante against the BJP, former chief minister B.S. Yediyurappa and Chief Minister Basavaraj Bommai chose to play down the yatra by calling Rahul a “bachcha (kid)”. The BJP’s Jan Sankalpa Yatra, meant to highlight the welfare schemes and achievements of the Central and state governments, ended up as a platform to target the Congress and its yatra. 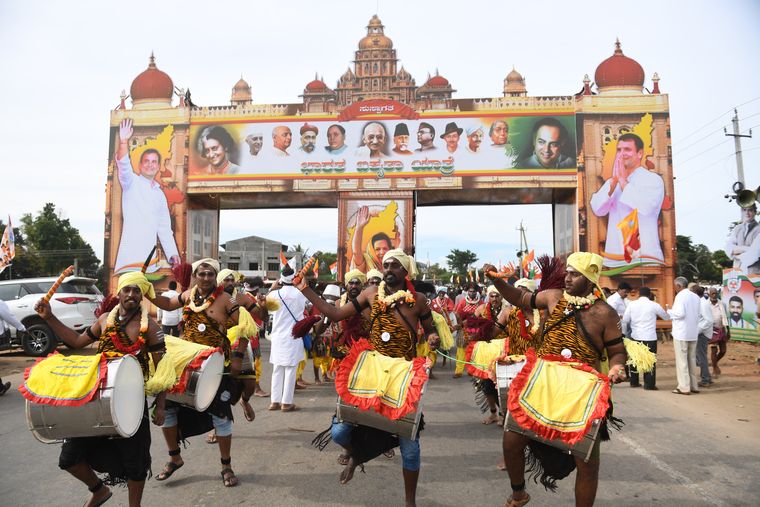 On the eve of the convention in Ballari, Bommai said Sonia Gandhi had relinquished the seat she had won in the 1999 Lok Sabha polls and her party was making a desperate bid to woo the people of Ballari once again. Mallikarjun Kharge, who addressed the convention, set the record straight by saying that Article 371 (J) of the Constitution that accorded special status to the backward Kalyana Karnataka region was a “gift by Sonia Gandhi”.

In poll-bound Karnataka, the districts mapped for the yatra―Chamarajanagar, Mysuru, Mandya, Tumakuru, Chitradurga, Ballari and Raichur―were the regions the Congress lost in the last elections. These are also the districts with considerable SC/ST and Vokkaliga population, which will be decisive in the upcoming elections. Walking hand in hand in solidarity with slain activist Gauri Lankesh’s mother and sister or tying the shoelace for his mother along the yatra in Mandya, or demanding fair compensation for the families of Covid victims who died because of oxygen shortage in Chamarajanagar, Rahul struck a chord with the common man.

The yatra has given the Congress some much-needed oxygen after a series of electoral debacles and the power tussle among state leaders. While the cold war between D.K. Shivakumar and legislature party leader Siddaramaiah is no secret, Rahul’s constant endeavour to bring the two veterans together was unmissable. When a reporter asked him about the party’s chief ministerial candidate, it sure touched a raw nerve. “We have formidable leaders in Karnataka who are complementary and brilliant. Once we win the elections, the decision on who will be the chief minister will take place through a process,” said Rahul.

Redefining the rules of the game, Rahul has chosen corner meetings over mammoth rallies and has limited his interaction with mainstream media, while relying on social media for outreach and publicity. Rahul said the Congress had to resort to the yatra after democratic institutions, media and Parliament shut the doors on opposition parties. “The yatra gives me an opportunity for truthful conversation,” said Rahul. “I see a distance between the political class and our citizens. While I talk to the people I can share their suffering and also their wisdom. It is a powerful experience.”